A few years later, I got my hands on the second-generation LEGO Mindstorms NXT. It was a robotics kit with pieces like IR sensors and motors, but it used LEGO's standard 'Technic' pieces. I have fond memories of going through LEGO's online gallery of user creations and trying to replicate the designs, and downloading other people's programs (like a version of Pong that was playable on the tiny LCD).

Today's toy robots are obviously much more advanced, with a great example being Sphero's recent Bluetooth-controlled BB-8. Another example is Anki's Cozmo, a robot with an immense amount of personality. The company announced a 'Liquid Metal' Collector's Edition earlier this year, and sent me a review unit to try out. I never got a chance to try out the original, but the Cozmo Collector's Edition is pretty great. 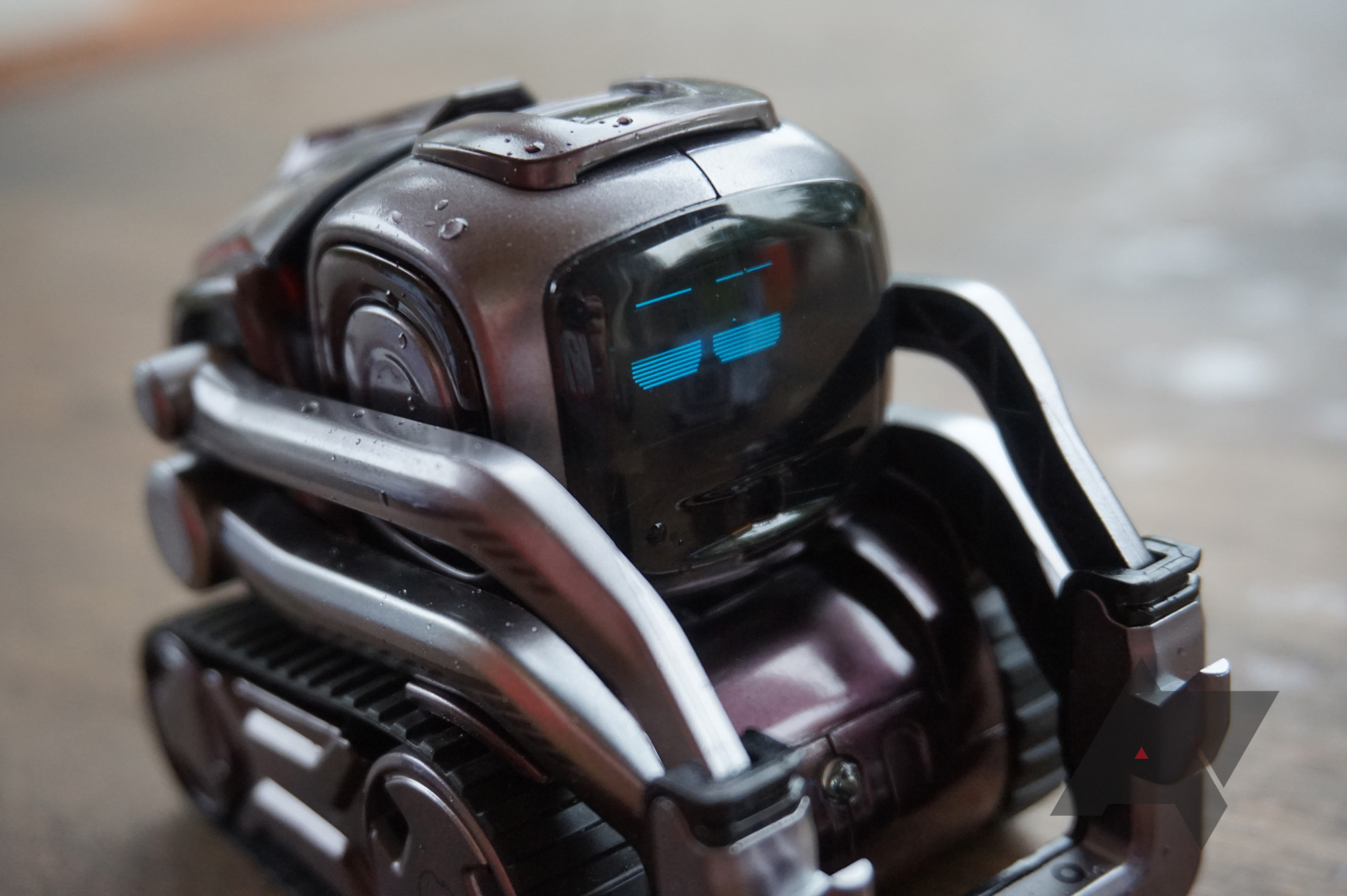 If you're completely unfamiliar with Cozmo, he's a small tank-like robot with a forklift for picking up Power Cubes (more on those later). On the front is the head, which displays a pair of eyes during normal use. The eyes help convey the emotions and attitudes of Cozmo. When he's curious, one eye will be slightly raised (aka, the Dreamworks face). When he's mad, they are slanted downwards. You get the idea. If you've ever watched Pixar's film 'WALL-E' (and if you haven't, go watch it!), Cozmo is incredibly similar to Eve when it comes to the eyes, even replicating the CRT-like flickering to indicate blinks. If WALL-E came out today, I have no doubt Disney would ask Cozmo to create toys for the film. 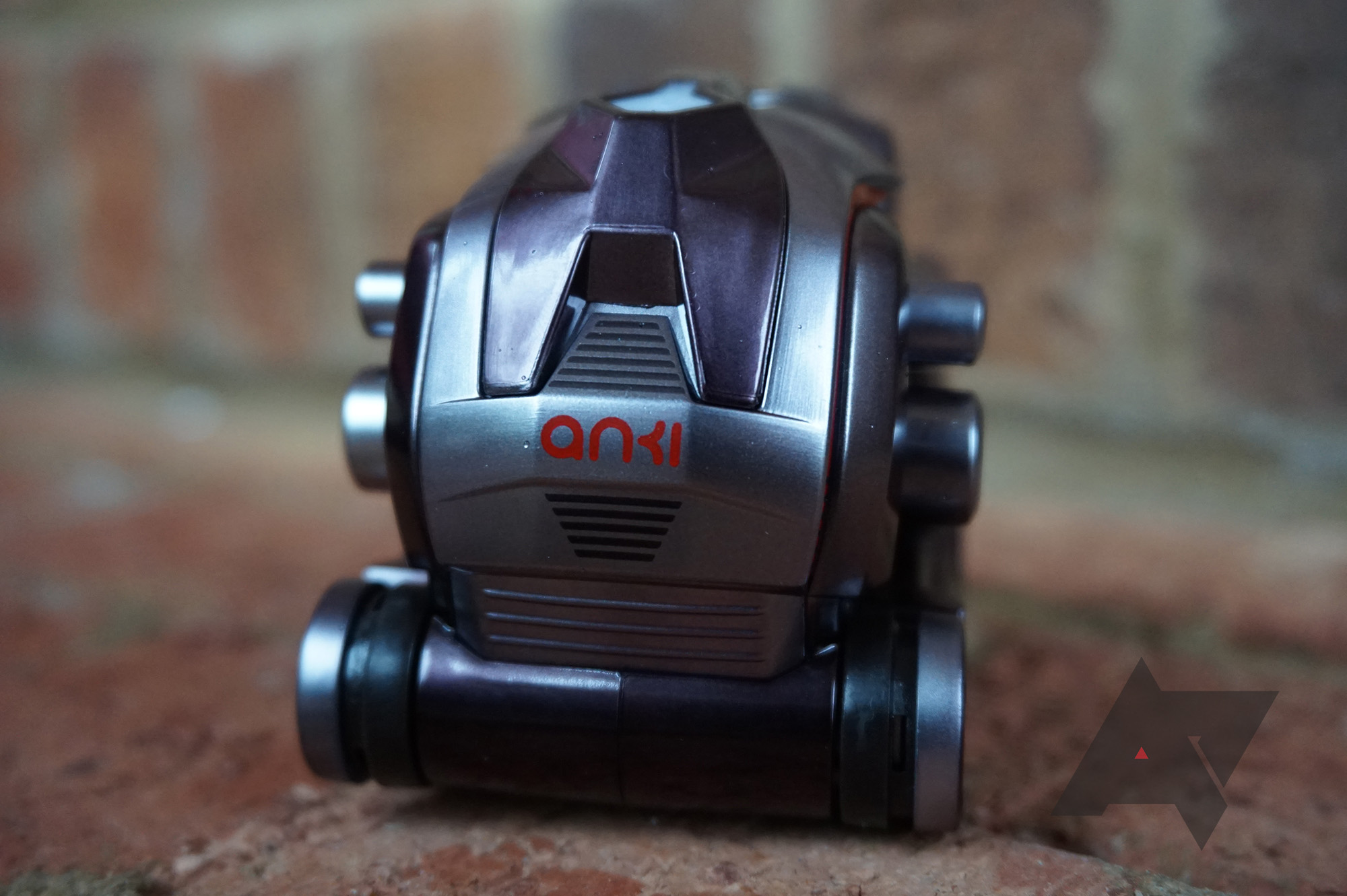 The front also contains a depth sensor and a camera, which can be used with the robot's 'Explore' mode. On the top is a speaker, which also helps make Cozmo seem more alive. For example, when he's angry or frustrated, he'll 'talk' fast in a high-pitched tone. While Cozmo has the eyes of Eve, the sounds more closely resemble M-O (the robot that followed WALL-E around while trying to clean him). The top also has a 'backpack' light that indicates the battery level. 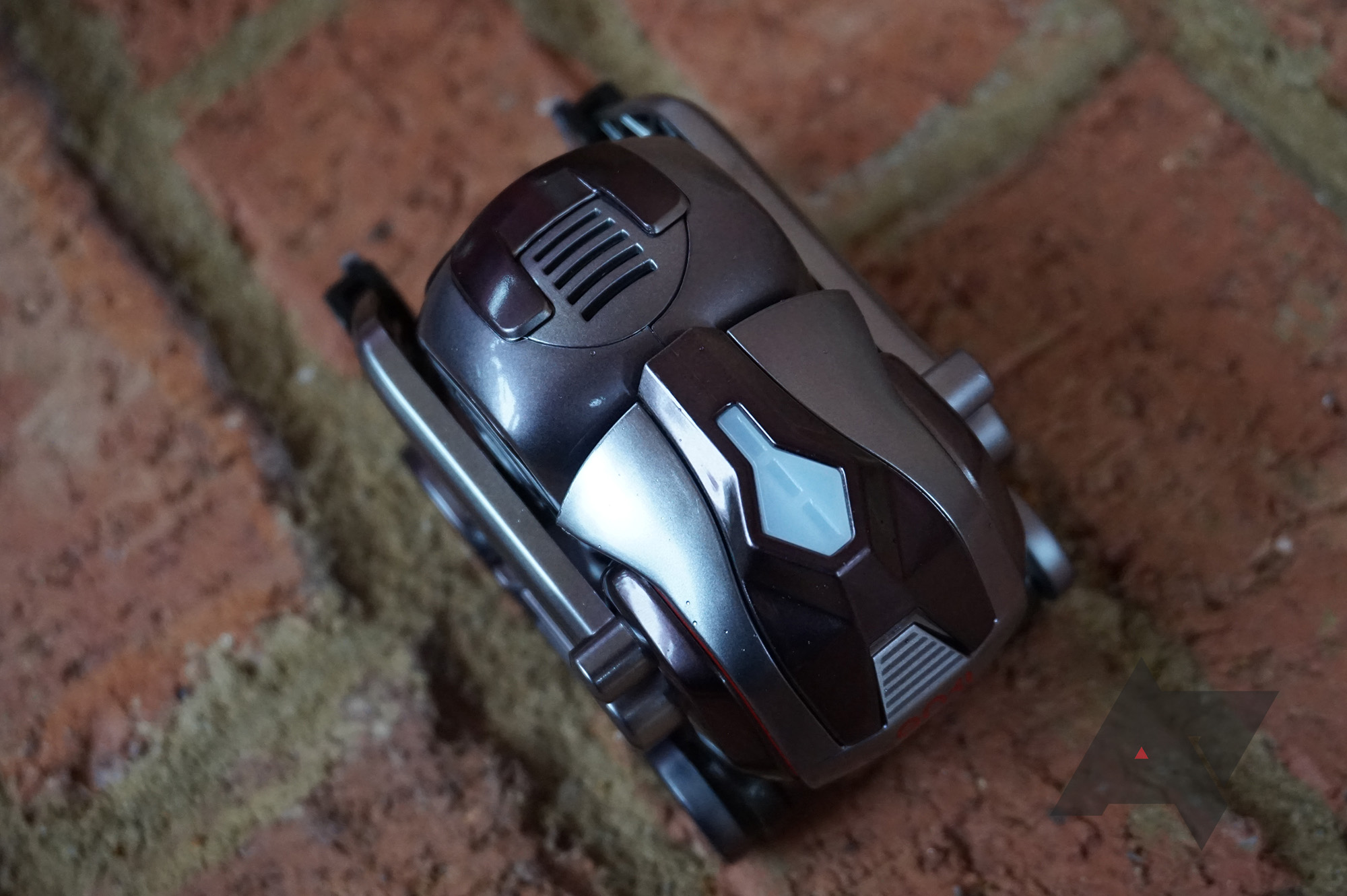 Cozmo's treads are just rubber, and you can easily take them out if they get dirty. If you have pets (like me), animal hair can sometimes get caught between the wheels and treads, but it's pretty easy to pull them out. Cozmo is also selling a Tread pack for $14.99 ($24.99 CAN), which includes four extra colored treads - Blue, Green, Yellow, and Crimson. I tried them out, and while they were functionally identical to the black ones that came with the robot, they did offer some additional customizability. It's also fun to mix and match them. Finally, we come to the Power Cubes. Cozmo comes with three of these, which are used with many of his games and tricks. They'll light up blue when Cozmo can find them, and green when he's about to do something with them. If there are cubes not being used by the current activity, I found that placing them a few feet away was a good idea. Especially when exploring, Cozmo often wanted to use a far-away cube, even if there was one right in front of him. The cubes are touch-sensitive, which is used in some of the games.

The software is what makes or breaks toys like Cozmo, and my experience in this area has been mostly good. For this review, I was given access to v2.0 of the Cozmo mobile app, which is significantly different from the previous versions. 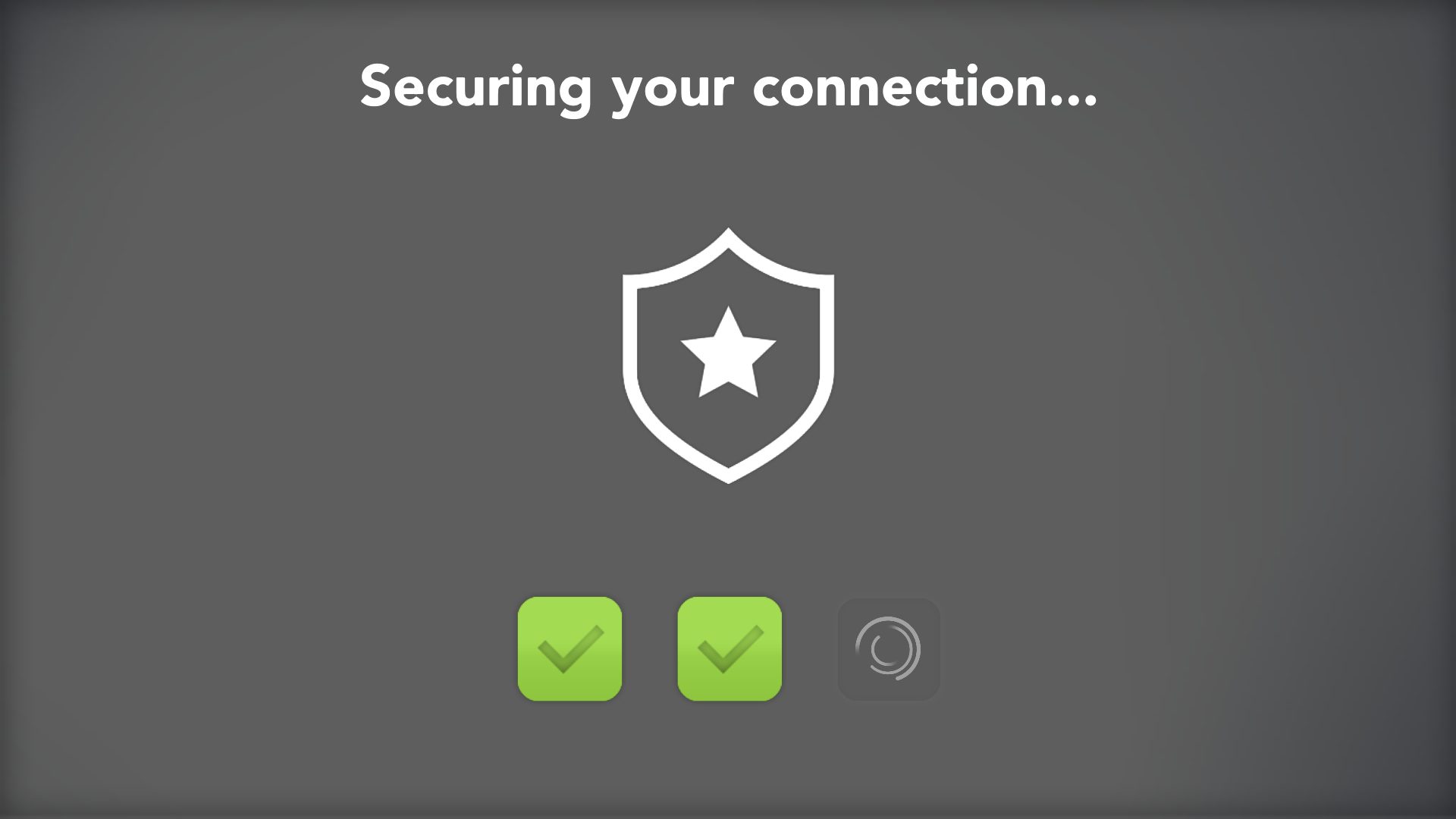 Once you unbox Cozmo, you're instructed to download the app from the Play Store. If you have an Amazon Fire device, you can also download it from Amazon's App Store. Cozmo cannot be used independently of a compatible mobile device, even in a limited fashion, because all of the 'brains' are in the app. I really wish it could do something when not paired to a phone or tablet, but that's not the case.

The setup process for Cozmo is a bit difficult. When you charge the robot up for the first time, a Wi-Fi password is shown on the screen. You have to connect to his network (it starts with 'Cozmo') with the password to continue with the setup process. I found that it's better to do this manually instead of letting the app do it, which sometimes got stuck in a loop during this part. It's also a good idea to make sure that Android stays connected to the Cozmo's network (on my Pixel, a pop-up appeared asking if I wanted to stay connected), because the lack of internet access might make your phone switch back to another network automatically. 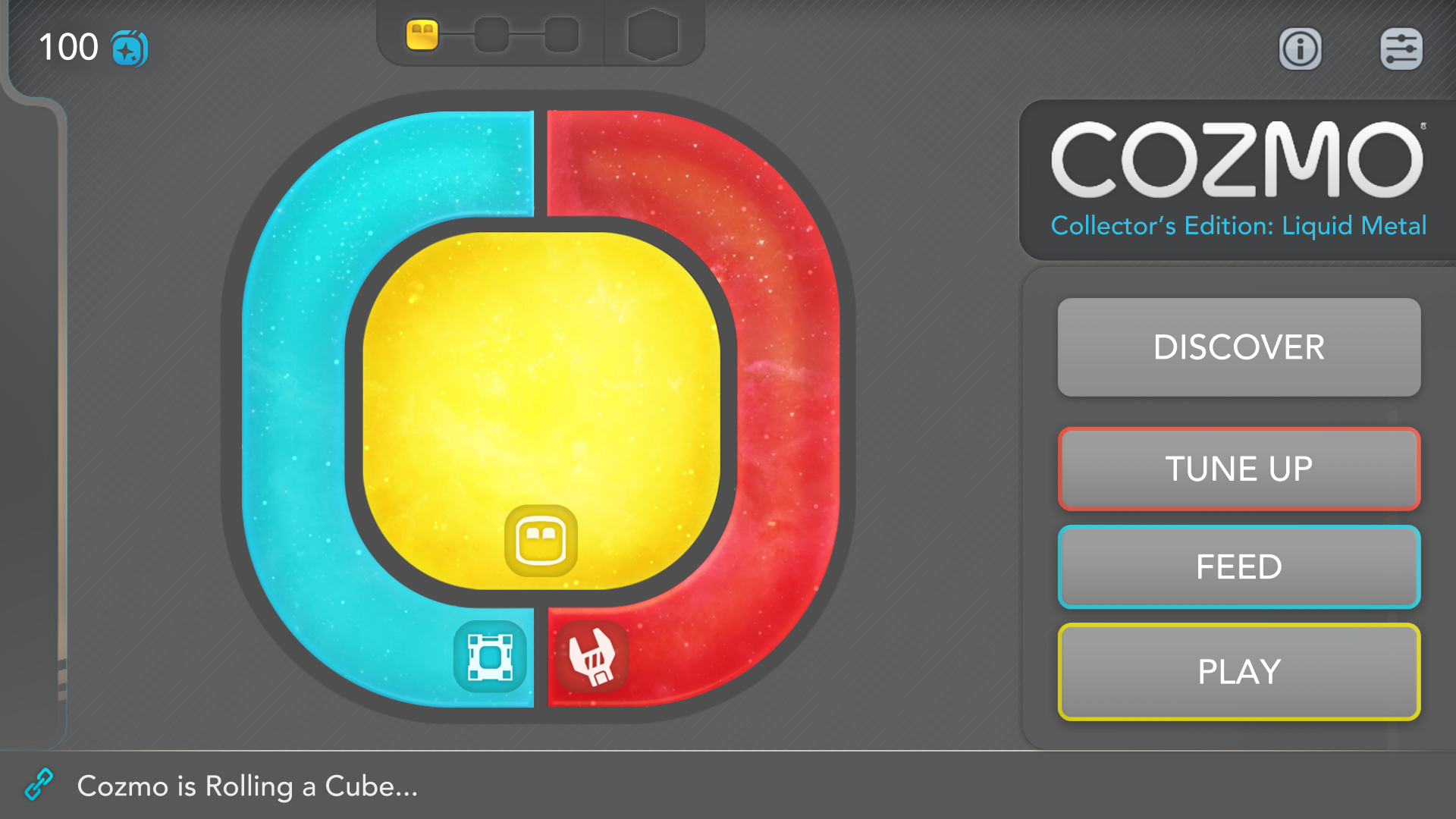 Once the setup is done, you're greeted with the main screen. This is where the app's 2.0 update comes into play. With the older app, Cozmo would have a set of daily goals, like mini-games or tricks. But with v2.0, you now have to fulfill his three needs - happiness, tune-ups, and food. Doing this will earn Play Tokens, three of which can be used to get a Bonus Box. These unlock rewards like games and tricks. 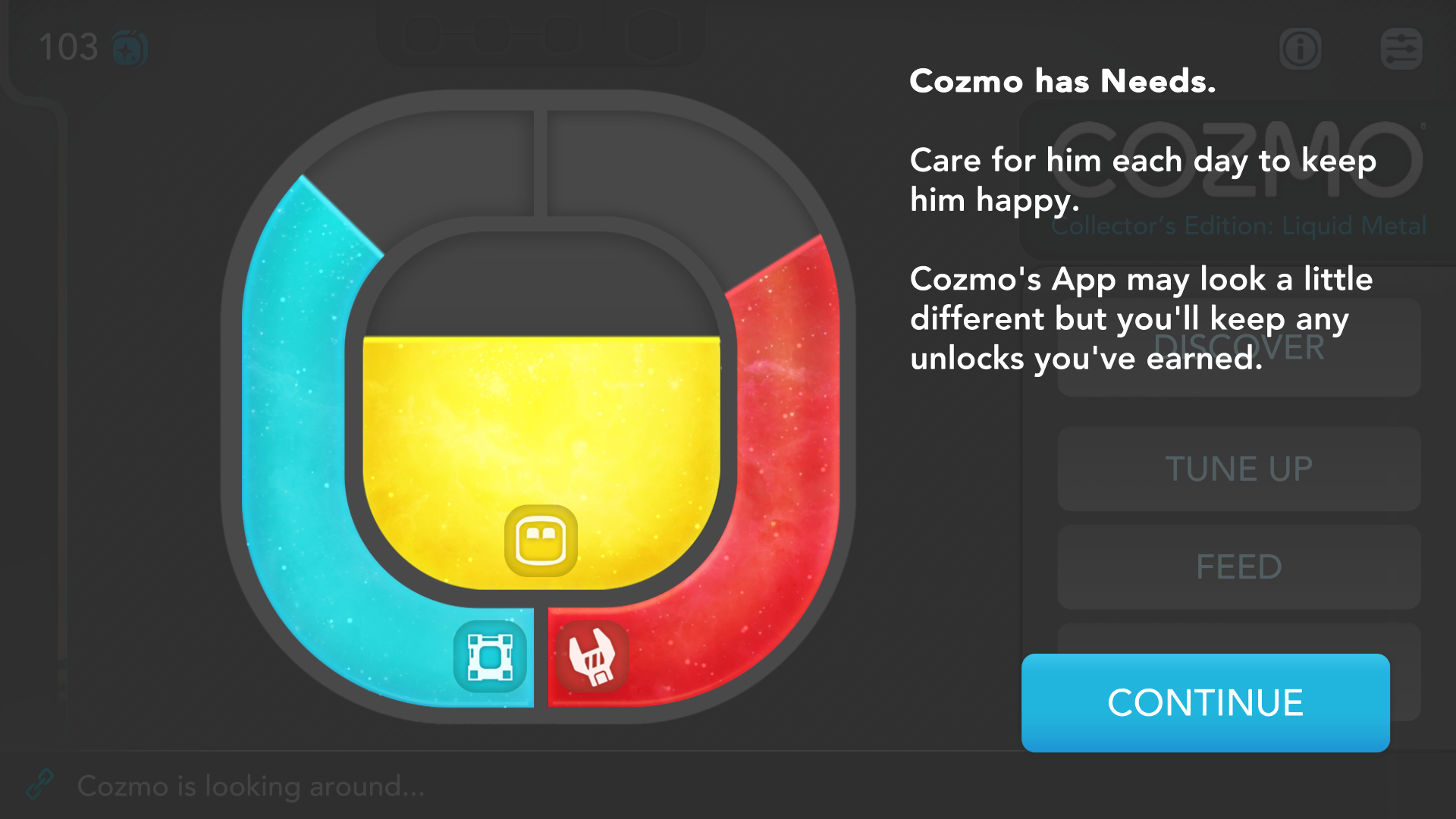 I'm really not a fan of the new 'Needs' system - all the actions seem boring and repetitive. For example, 'tuning up' Cozmo involves tapping a series of arrows in the order they appear on screen, which Cozmo then repeats. Feeding him involves placing a Power Cube in front of him, which he then rolls up to and pretends to eat. I have to imagine that even young kids would find this annoying after a while, especially considering you can't play with it until his needs are met. 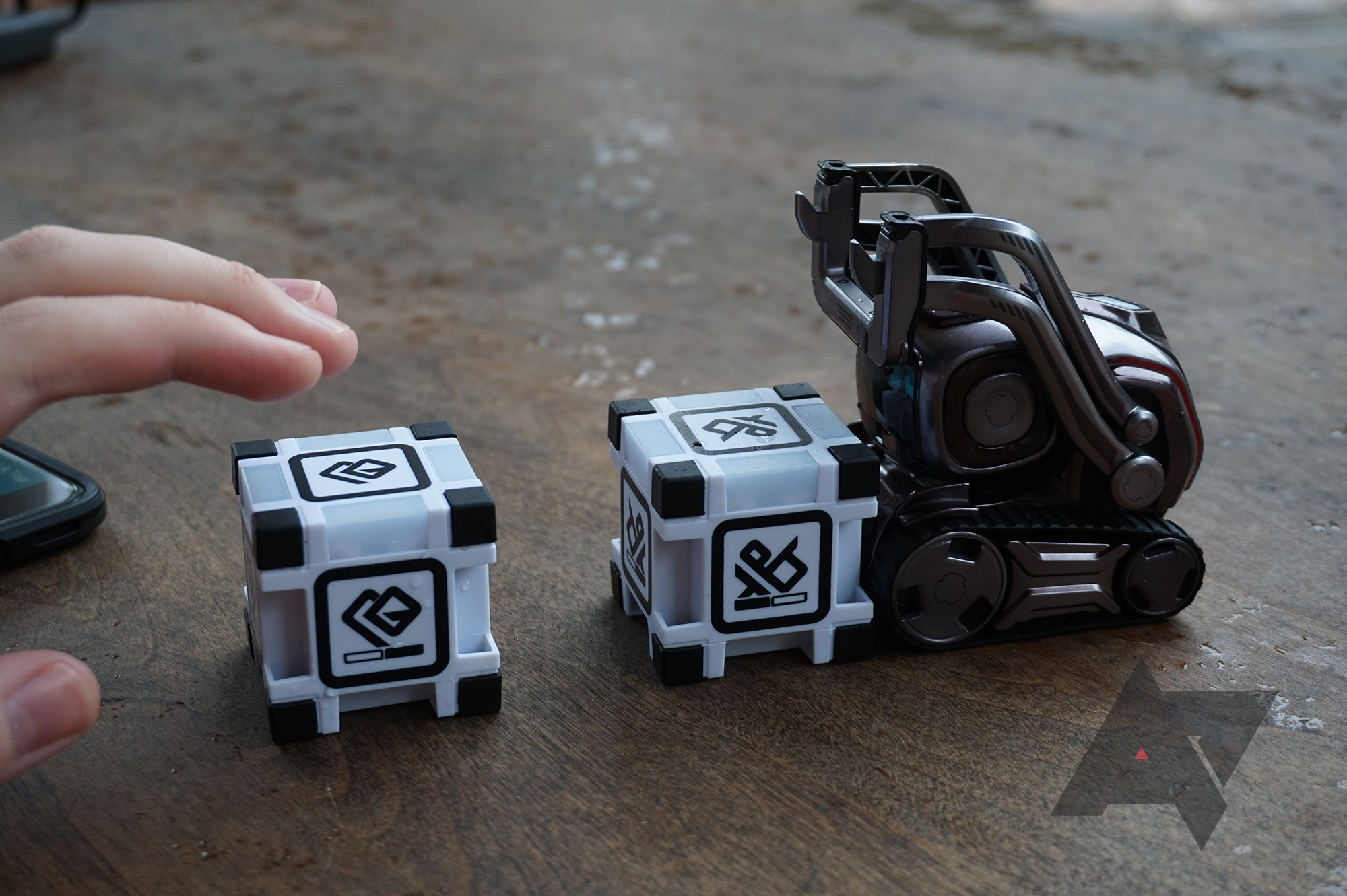 Cozmo's games and tricks are probably the toy's main attraction. To start off with, there are three games you can play:

In addition to the games, there are six tricks that Cozmo can perform on command. Here are five of them (I didn't unlock the sixth one in time for this review):

Keep in mind that all these games and tricks require 'Sparks,' which are provided by the Bonus Boxes mentioned in the above section. 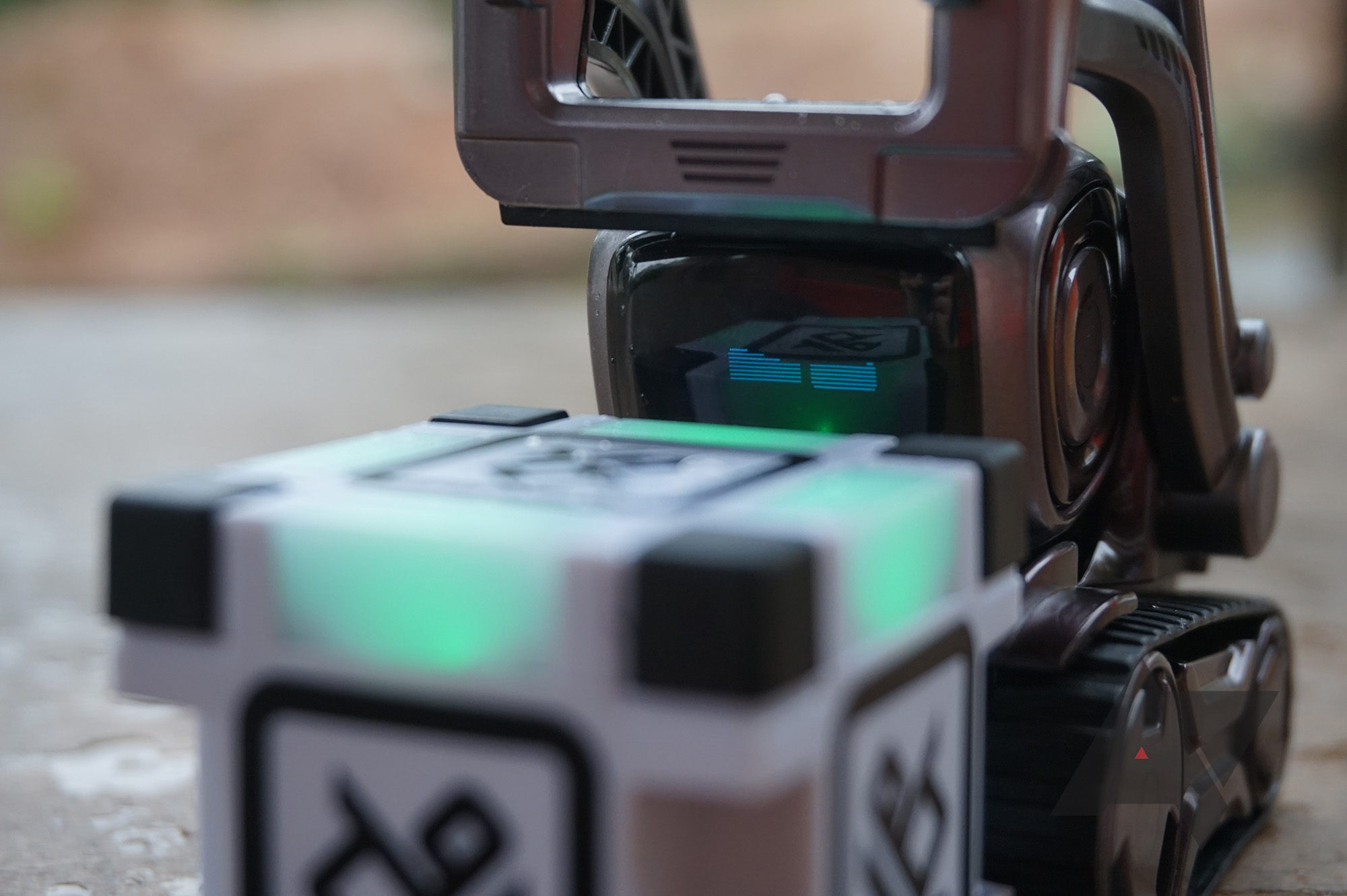 While the games and tricks are fun, the app's 'Explore' section is where I had the most fun. The first activity in this section is 'Meet Cozmo,' which trains Cozmo to recognize people based on their face. Once you enter a name and let him get a good look at someone, he will say their name. Then when Cozmo is exploring by itself, it will look for faces and greet them if he knows them. The text-to-speech system isn't perfect (pronunciation might be off for some names), but it goes a long way to making Cozmo seeming more personal. 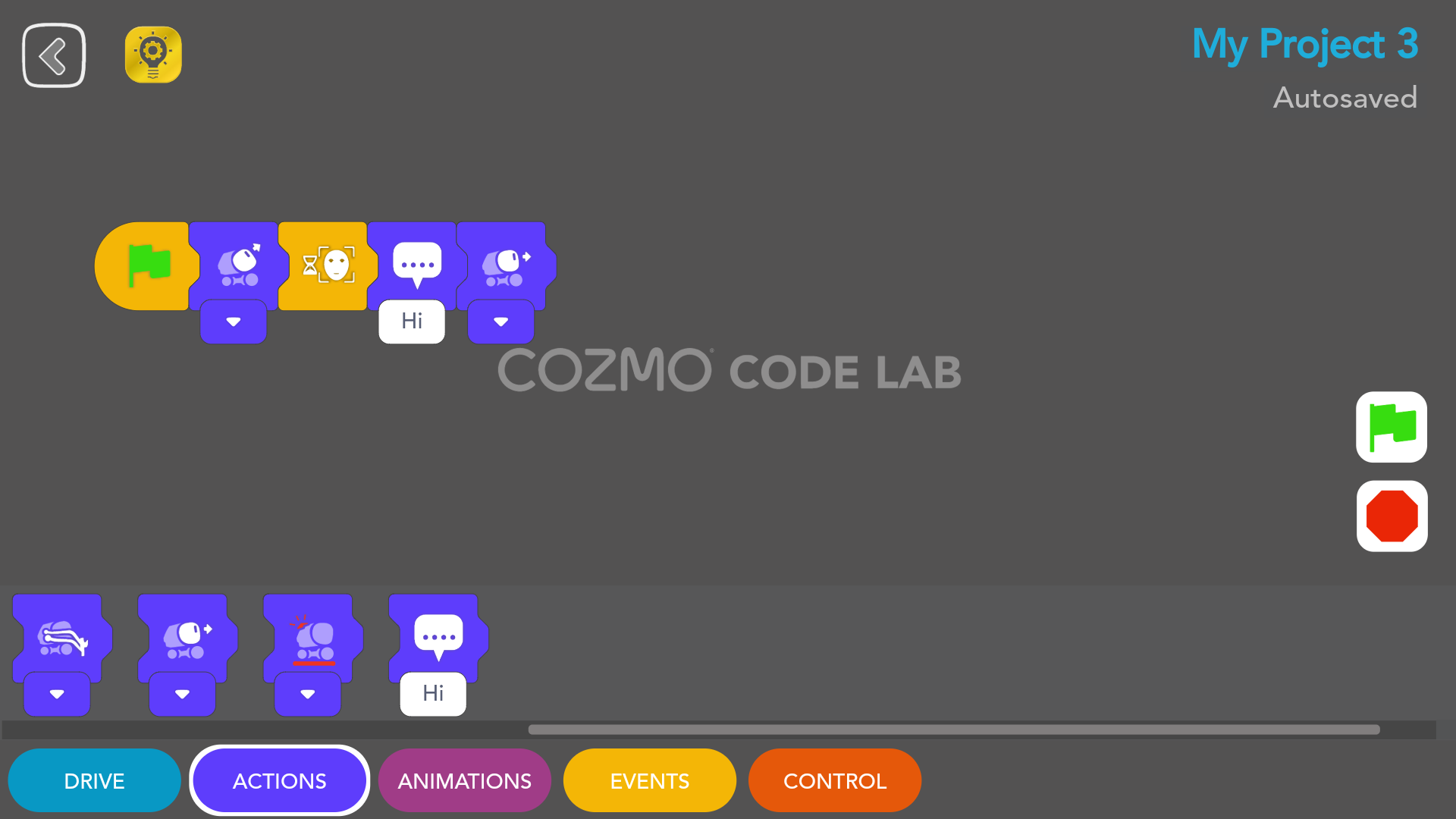 This program makes the Cozmo look up, wait for a face, say "Hi," and then look back down

The second activity is known as the 'Code Lab.' This allows you to create basic programs for Cozmo, by placing blocks together. If you've ever used visual programming languages like Scratch, you'll feel right at home here. You can create programs that use every function of Cozmo, including motor movements, talking, and looking for faces. However, many traditional programming elements like 'if/else' statements and variables are missing here (there are loops, which you can set for infinity or a pre-determined number). If this isn't enough for you, Anki offers a Cozmo SDK that uses Python. Anki isn't advertising Cozmo as a STEM robotics kit, so I won't be too harsh on the app's Code Lab, but I hope Anki continues to work on it.

Picking up a Power Cube in Explorer Mode

Following my dog in Explorer Mode

Next is 'Explorer Mode,' which might be my favorite function of Cozmo. This allows you to pilot him like an RC car, complete with a video feed. While driving him around, you can even pick up/drop cubes (either automatically, or manually by raising/lowering the forklift) and have Cozmo greet people by name. I had a lot of fun with this mode, and the range was pretty good. It was raining outside during my testing period, so I was unable to try it outdoors, but even at a range of 60 feet, I didn't experience connectivity issues.

The last activity in Explore is 'Cozmo Says,' which is where you can type in phrases for Cozmo to say. It's fun for about five minutes. 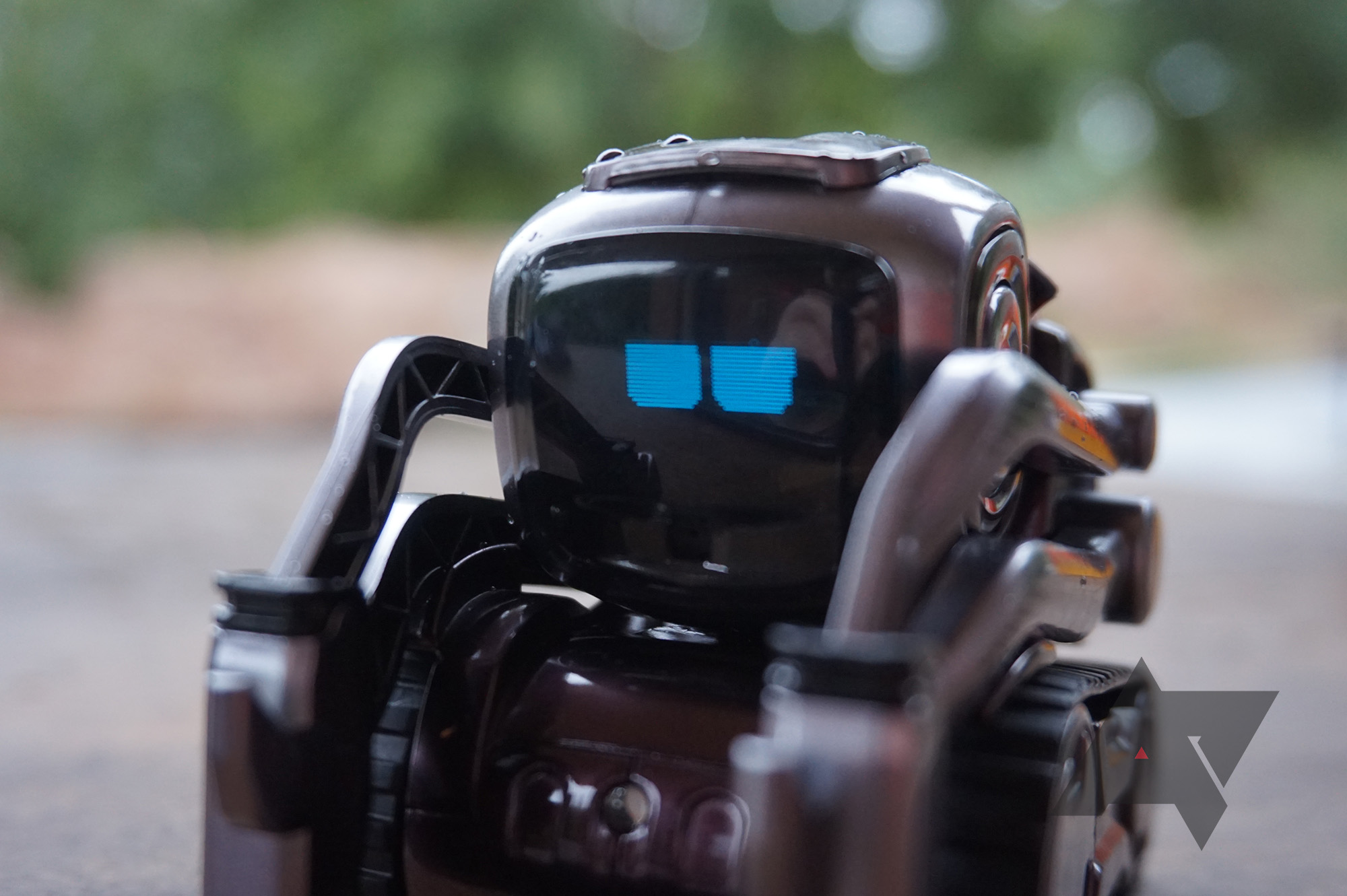 Besides the ones I already addressed, I have a few complaints with Cozmo that didn't fit into any particular section. The first is that a Wi-Fi connection is required to interact with the phone, instead of Bluetooth. I understand why this is the case - not only is the app Cozmo's 'brains,' but features like the video feed in Explore Mode probably need more bandwidth than Bluetooth can provide. Still, this means that your phone won't have internet access while playing with Cozmo. So if you're expecting an important email, you should probably use another device to play.

Secondly, the only way to turn him on is to plug him into the charging dock, so you can't easily play with Cozmo in places without power. I'm not quite sure why the top button isn't a power button. Thankfully, the charging dock uses a full-size male USB connector, so you can use a normal car charger or battery bank to power him.

Thirdly, Cozmo's WiFi network stays on while he's charging. So if you already have Wi-Fi interference issues, or you really don't want another network showing up at your home, this will get annoying. The only solution is to leave Cozmo off the dock, and only charge him before playing.

Finally, there is no way to completely turn off Cozmo's sound. Even at its lowest setting, he's still audible a few feet away. I hope Anki adds a mute button to the app at some point.

So, it's conclusion time. For the most part, Cozmo is definitely a fun toy, and definitely better than other remote control devices we've reviewed. The build quality is good (it's plastic, but it doesn't feel cheap), there is a wide array of activities and functionality, and it's definitely fun. But there are several minor gripes that keep it from being amazing (see the above Complaints section if you skipped to the end).

So is the $179.99 asking price worth it? I think that can only be answered by you. I'm not massively into robots myself anymore, but 11-year-old me would probably kill for it. Maybe you have children that have always wanted a remote-controlled robot that does more than walk/drive around. Overall, I think just about everyone interested in robots would find some enjoyment with Cozmo.

In the United States, Cozmo will be available exclusively from Toys-R-Us and Anki's website. In Canada, he will be sold through Best Buy. Anki also plans to release him in Australia, France, Germany, New Zealand, the U.K., and Nordic countries.

Amid much confusion, Pixels and Nexuses are finally starting to receive September security OTAs