Two of Amazon's 2017 additions to its popular Fire TV lineup have been leaked courtesy of AFTVnews: a mid-range dongle and a flagship set-top box. Both will be capable of 4K60, and the cube-shaped one is notable because it reportedly has new built-in hardware that allow it to act as an Amazon Echo Dot when you want it to.

GeekBench 3 comparison of the new dongle with other Fire TV devices.

Let's start off with the dongle. This model, codenamed "AFTN," will be an independent new model, and will not replace the current Fire TV Stick. This dongle differs in that it supports 4K at 60fps (as previously mentioned), but it'll otherwise still be pretty barebones feature-wise, with only an HDMI output and a microUSB port for power on board. It will feature a 1.5GHz quad-core processor and a Mali-450MP GPU, 2GB of RAM, and (probably) 8GB of storage, making it more powerful than the current Stick, but a lot less capable than even the current Fire TV box.

The new box is notably more interesting. This one is codenamed "AFTA," and although its specifications are unknown, it should be more powerful than the current second-generation Fire TV if it's poised to be the new Fire TV flagship. It apparently "essentially combines the functionality of a Fire TV, an Echo Dot, and an IR emitter, like the Harmony Hub, into a single device." 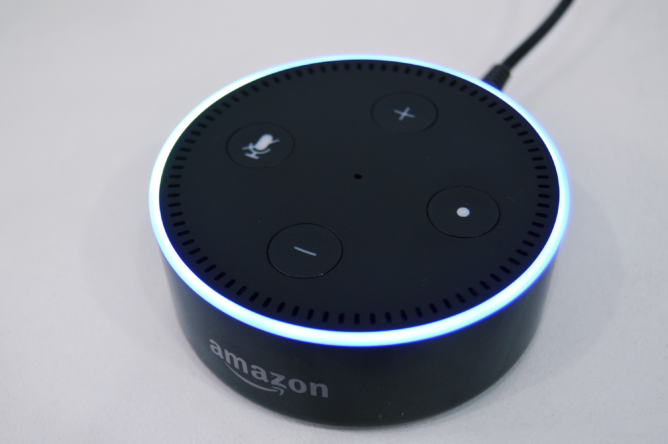 The 2nd-gen Echo Dot with its blue LED light bar on, for reference.

There are holes on the top for far-field microphones to allow for dictation to Amazon Alexa, a speaker built-in for Alexa to make responses from (if your TV is off), and a blue LED light bar that all Alexa devices have. The top has four buttons: two to control volume, one to disable the microphones, and an "action button" that acts as a trigger for Alexa. And its IR emitter will allow the Fire TV to control TVs and A/V equipment near the box.

The dongle is expected to be announced this month and released in October, and it should be priced between $60 and $80. The cube-shaped box will be announced later, but it should be released late this year or early in 2018. Expect the price to be over $100 given its capabilities. Hopefully, we hear more about these new devices soon.

Pixels on Oreo are disabling mobile data on some carriers, Google looking into a fix