Over the last few months, Google has been taking small steps to integrate Allo and Duo into different pieces of the phone. Most recently, Allo shortcuts were added to the Contacts app, but today's teardown is more closely related to Duo recording its video chats to the system call log. It looks like Google's next step may involve having its Phone app be a little more forward about Duo.

There's very little to analyze in this one, so I'll keep it pretty quick. Instead of treating Duo like any other video chat service, incoming and outgoing calls will be specifically labeled as Duo video calls.

For reference, the screenshots below show what you'll currently see in the call log if you receive a Duo call. A video camera icon is displayed in the main log and detail screen, but there's no sign that the call was actually made with Duo. If you were to use multiple video chat apps that all write to the system call log, they are likely to be indistinguishable from each other. 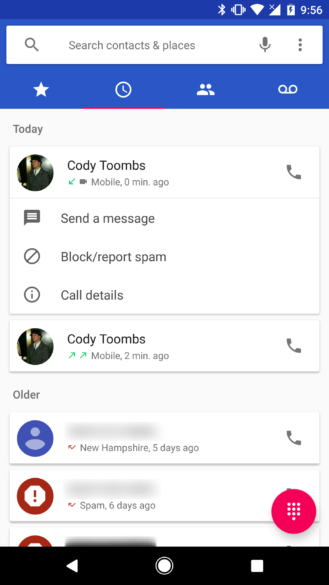 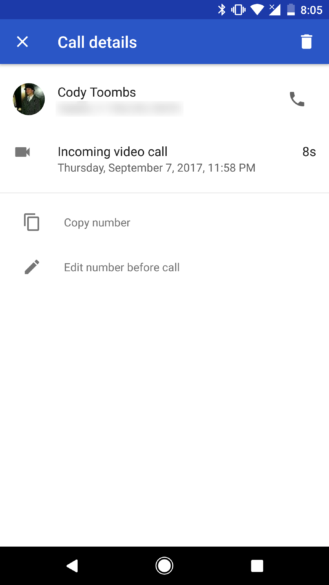 There are also new lines that basically advertise Duo, suggesting it as a service for chatting with friends and family. Whenever this shows up, it will likely appear as a card, either as a big modal dialog box on top of the app, or more likely as a card fitting into the log until it is dismissed with the tap of an OK button.

At this time, users can't actually initiate a Duo call from the Phone app. Tapping the call button doesn't go back to the originating app, it just fires up a regular voice call to the listed phone number. There aren't any additional clues to read into, but I'm going to step out on a (short and very sturdy) limb to make an obvious prediction: Google is also going to enable the Phone app to immediately start a video call with Duo. Like I said... Obvious.

Prior to v12, there haven't been any strings related to Duo in the Phone app. The new additions are there to advertise Duo and give it a little more visibility once it is being used. It would only make sense to take one more step and enable users to start a video call directly from within the Phone app. This function already exists in Allo, and it's easily done using the contact list and Google's existing infrastructure.

Google is preparing to deploy a mandatory Assistant update that forces you to relink smart home ...

Galaxy Note8 gets an in-depth teardown courtesy of iFixit, receives a score of 4