The Android enthusiast community has always been hungry for phones that offer a flagship experience at a low cost. That's why people still mourn Google's Nexus program a year later, despite numerous hardware problems over the years (I should know, my 5 and 5X both died unexpectedly after about a year). And despite OnePlus' many misfires over the years, the company's phones are still praised.

Two entrepreneurs from Canada have been working on the "Frank." phone (which I will refer to as simply 'Frank'). The team's pitch is simple - companies charge far too much for smartphones. I'm sure many of you will agree with that - the $1000 starting price of the Note8 is insane. Thus, they set out to develop a cheap smartphone that still does everything you need a smartphone to do - the Frank phone. 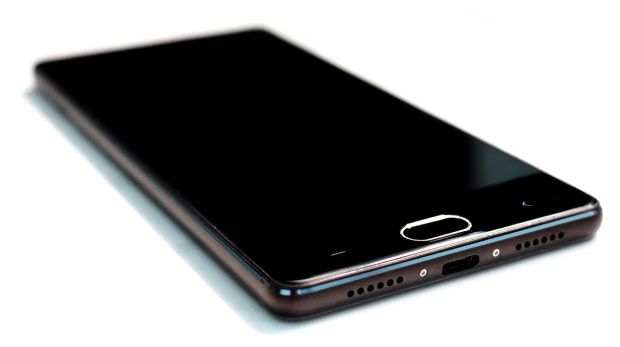 It's not a bad-looking phone.

The project launched today on Indiegogo, seeking $250,000 in funding to make the phone a reality. At first glance, there doesn't seem anything immediately wrong with the device. For $180, you get a 5.5" 1080p display, an 8-core processor, 4GB of RAM, 64GB of internal storage, a 3,000mAh battery, a microSD card slot, and dual-SIM support. There are a 16MP rear camera and an 8MP front camera, as well as a fingerprint sensor. At the very bottom of the Indiegogo campaign, they discretely mention the processor is a MediaTek 6750T.

The project also has a very edgy tone, with phrases like, "It’s about time to disrupt the shit out of the North American smartphone industry," and, "Let’s give the Big Guys a collective middle finger by joining the frank movement." The original home page had more colorful language, like "It’s just another fucking phone but it’ll only cost you $180."

Most importantly, the team promises to be as open and honest as possible, hence the phone's name (as in, "Let's be frank."). But there are multiple red flags around the project that make it seem anything but completely honest.

The first questionable aspect is the choice of fundraising site, Indiegogo. Kickstarter is usually the first choice for legitimate fundraising projects, as the site's guidelines often keep most of the fake/misleading projects out (thus raising consumer confidence in the projects that do get approved). We can see from the Frank Twitter account that the project was originally going to go up on Kickstarter:

So between August 27 and today, we can assume that Kickstarter denied the campaign from appearing on its site. Kickstarter requires projects about complex electronics (like a phone) to show backers a working prototype, and repackaging a previously-created product without adding anything new is not allowed. That last part is important, because of the next red flag.

Update: Fahd Alhattab, one of the two entrepreneurs behind the project, stated on Twitter that the project was never posted to Kickstarter at all. According to him, Indiegogo presented them with a better promotions package and a better support program:

We made the shift when we were offered a better promotions package with Indiegogo and thought it was worthwhile to get the help.

You can take that with a grain of salt if you wish, but it does seem like a reasonable explanation for the switch.

The project's campaign page goes on and on about the design process for the Frank phone. This is a direct quote from the Frank site's About page:

As a huge tech geek and design aficionado, Mo couldn’t design just any phone. It had to be beautiful, hawt, sexy, or something along those lines. Ultimately, it needed to sell. So, he decided to create a phone with two simple values in mind: high-tech and low cost.

After many design variations, models, prototypes, and a few fights with the whiteboard, he was able to strike a good balance between build quality and design quality. He crossed a combination had a sleek aluminium build, no camera bump, and a thin chasis, and packed with specs.

So naturally, you would expect that the phone was completely designed by the Frank team. The images of whiteboards and sketches on the campaign page reinforce this idea: 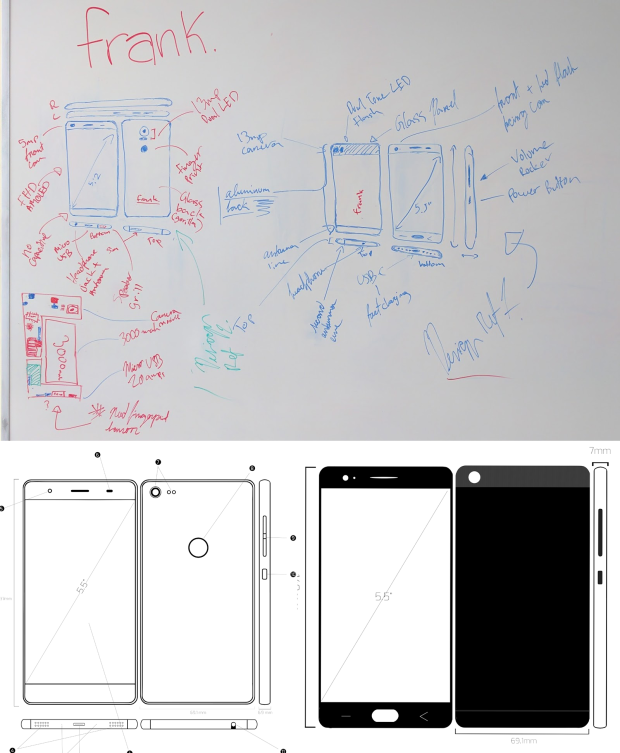 There's just one problem - the Frank phone uses an existing OEM reference design. If you take a look at Alibaba, a brand name called 'Leegoog' is selling a phone nearly identical to the Frank phone for $125-135 per unit (you have to order them in batches). 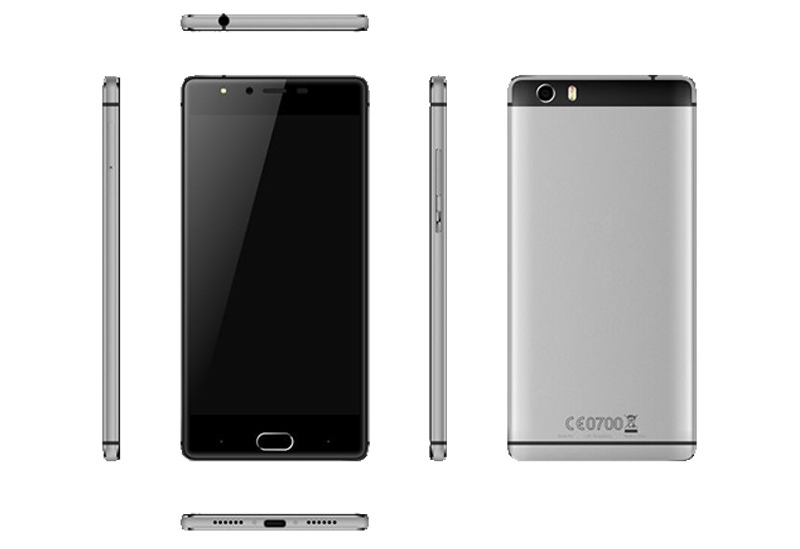 The specs for the 'L608' are identical to the Frank phone - MediaTek M6750 processor, 5.5" 1080p display, dual-SIM, 64GB of storage, and 4GB of RAM. It has the same cameras too - a 16MP back camera and 8MP front camera. The only difference is that this phone is listed as having Android 6.0, while the Frank phone supposedly has 7.0 - more on that later.

The only differences are visual - the Frank phone has its own logo on the back, and slightly different capacitive navigation buttons. But it's not out of the question that the OEM could make slight tweaks for the Frank team's order (or the Frank phone could be using a newer OEM design). The point is that the Frank phone's design is anything but original, despite what the campaign would leave you to believe.

Many crowdfunding projects barely manage to ship the promised product - let alone support it for an extended period of time. The Frank phone claims to ship with Android 7.0 Nougat, but the reference design from Alibaba has 6.0. MobileSyrup was one of the few sites given a review unit, but that one still had Marshmallow.

Had it ~4 days. Didn't review bc they said it wasn't final. Software was 6.0 skinned by manufacturer. Say they're doing own support.

Bringing a new version of Android to a device is a lot of work, one that most OEMs dedicate entire teams to. The Frank project only lists one person as an engineer, Ahmed Ammar. I was able to find a person with the same name living in Ottawa, Canada, but according to his LinkedIn profile, he's currently employed with Broadview Networks as a Senior Systems Engineer.

Assuming that's correct, the Frank phone doesn't even have one full-time engineer. The rest of the team only consists of marketing people and the youth leadership coach helping 17 year-old Moe Omer release this phone. So we're led to assume that one engineer will develop and release Android updates for this phone in his spare time.

If you just hate reading and you skipped all the way to the end for the conclusion, it's simple - don't back the Frank phone. You're simply buying a generic Android phone that already exists, with the promise of support from a student going to college and his youth leadership coach.

If you're in the United States, you can buy a Moto E4 Plus for the same $180 that the first Frank phone Early Bird units cost. While the E4 Plus doesn't have a 1080p screen, it does have full GSM/CDMA carrier compatibility and ships with Android 7.1.1 (we reviewed it here). Once the first batch of Early Bird units runs out, the Frank phone will jump to $219, and then again to $233. For that much money, you can likely get a Moto G5 (or even a G5 Plus on sale), which would be a better device in every regard.

Unlike the Saygus V Squared, I'm fairly sure the Frank phone will ship to backers (because it already exists). If funded, the team is promising a ship date of December. But you may or may not get Android 7.0, and you probably won't get any level of support beyond that. Your money is best spent elsewhere.

The team behind the Frank phone has provided the following statement, in response to this post:

We started out working on a design of what specs we wanted within a phone and what we were willing to compromise. We went to manufacturers with our designs and desired specs, along with our calculated approximate price point, but because we didn’t have the capital to pay tens of thousands of dollars for a custom mould, we worked with many manufacturers on matching different moulds to find one closest to our design, and tested out several different prototypes before settling on this one.

So, we’re currently working with a pre-made mould from a Chinese manufacturer, the one you see on Alibaba. However, the ordinary person cannot reasonably purchase the one on Alibaba as the minimum order is 3,000 phones. We’re working with the mould, making customization and improvements, such as the upgrade to the front camera and the upgrade to Android 7.0, and introducing it to the North American market.

One of the biggest issues of buying a device from China is the quality. We have spent more than a year testing different prototypes and working with different manufacturers, seeing what is available, what matches our requirements and making adjustments to it accordingly. We’ve also been working closely with the manufacturer’s quality assurance engineers, as well as our own Ahmad Ammar who worked for Blackberry for seven years, to make sure everything is up to our standards.

Qualcomm has no plans for a Snapdragon 836, despite Pixel 2 rumors claiming otherwise

Google's Street View cameras are getting an upgrade