One of Android Oreo's main new features is picture-in-picture mode, which launches apps into little windows that go over other apps. It was added to Google Maps a couple weeks ago, but it wasn't functioning properly until a few days ago. Even now, however, it isn't fully working, with PiP windows sometimes not triggering when users hit the home button during navigation. Google is saying that this will be fixed soon, marking the official rollout of PiP for Maps.

Many people in Google Product Forums' Pixel User Community have been reporting that PiP does not open when the home button is pressed. (The GIF above shows how the functionality should work.) In response, Orrin, a Pixel Community Manager that we see on the forums quite frequently, posted this message earlier today: 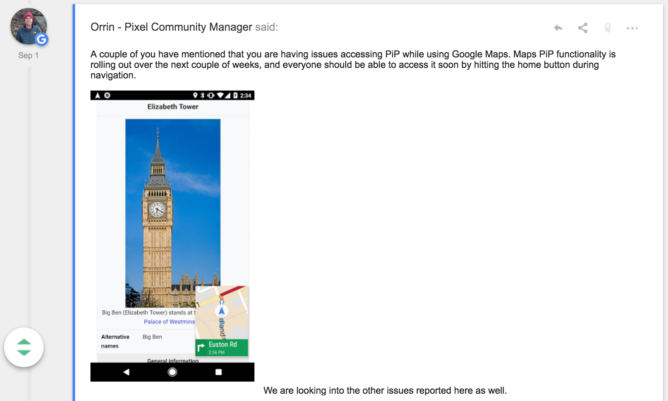 So if you've been having issues with Google Maps and picture-in-picture mode on your Android 8.0 Oreo-powered device, your problems should be resolved within the coming weeks as the feature fully rolls out. This isn't the most specific answer, but it's better than nothing, right? Feel free to let us know how Maps' PiP mode has been treating you.