After a short beta period The Walking Dead: March to War is officially available on the Play Store. It is a free-to-play survival strategy game that features a beautiful design. While the game's art direction is visually superb, the gameplay is lacking thanks to its liberal use of the typical free-to-play mechanics we are all too accustomed to.

While it feels like yesterday that I did a hands-on with the beta release of this title, it was actually a month ago. If you are wondering if anything has changed since that initial first impression, it would appear that there are a few new things to look at.

First I would like to point out that the graphical settings have been changed for the better. Disruptor Beam states that they have been "significantly updated." I would imagine they mean the 3D backgrounds have been improved, as the 2D art already looked phenomenal on its own. Oh, and if you are worried about the graphics being too resource intensive, you can adjust them to your liking from the game's settings. This way you can enjoy The Walking Dead: March to War in its full beauty, or simply turn down the graphics in order to enjoy the best performance for your device.

The second change was made to how loading is handled. I have to say that The Walking Dead: March to War loading times have been greatly improved. Now the majority of screen transitions happen smoothly without any waiting. 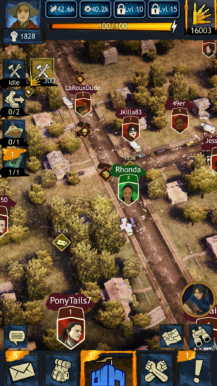 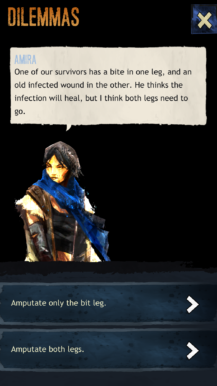 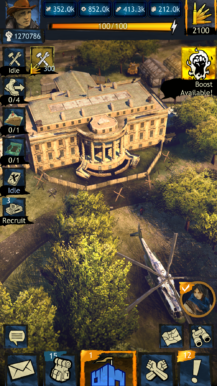 Other than those quality of life improvements it would appear that the rest of the game has pretty much stayed the same. That means you can expect gameplay quite similar to Northway Games' Rebuild series. Essentially you recruit survivors, build up your base, and then journey out onto the map in order to collect supplies and maybe even fight with other players à la Game of War's battle system.

As I said before, The Walking Dead: March to War is a beautiful game, but it is held back by its smarmy free-to-play design. Every step of the way you will run into false walls that want you to pay to remove them. While the concept of the survival gameplay is intriguing, it's hard to get over the constant wait timers. Considering that this is something of a competitive game where you can conquer your neighbors on the map, the fact that you can purchase your way to easier and more powerful gameplay ruins any fun that could've been had by fighting with your skills instead of with your wallet. 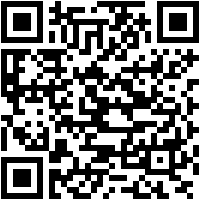 SURVIVE AT ALL COSTS, AGAINST ALL ODDS
IN THE WALKING DEAD: MARCH TO WAR, NOW ON MOBILE
Disruptor Beam Launches Visually-Stunning Multiplayer Strategy Game Based on The Walking Dead Comics, Bringing Fans Together to Do Whatever It Takes to Survive
FRAMINGHAM, MA – Aug. 31, 2017– Arm yourselves, gather your allies, and fortify your position as Disruptor Beam unleashes hordes of walkers and desperate survivors onto Google Play and the Apple App Store today with the release of competitive multiplayer strategy game The Walking Dead: March To War. Based on Robert Kirkman’s renowned comics from Skybound Entertainment, The Walking Dead: March To War is now available for free download worldwide. The game plunges players into a life-or-death struggle in the ruins of Washington, D.C., as they work with and against one another in real-time to survive in the The Walking Dead™ universe.
With stunning, handcrafted visuals based on the look of the comics, The Walking Dead: March To War immerses players in a world that is unlike anything seen in other mobile games. Players will navigate a massive, shared map of Washington, D.C. that includes real-world landmarks like the White House, and iconic locations from The Walking Dead universe such as Sanctuary and Hilltop – all locations that players will compete to control.
“Based on Disruptor Beam’s previous success creating immersive game experiences around iconic brands like Game of Thrones and Star Trek, Skybound entrusted us with bringing the world of The Walking Dead to mobile,” said Jon Radoff, Founder and CEO of Disruptor Beam. “Through the development of March To War, we’ve invented new ways to bring a level of graphic fidelity normally only seen in console games to mobile devices. The Walking Dead: March To War is not just great-looking, it truly raises the bar on what's possible with visual storytelling in these types of games.”
“Disruptor Beam has an impressive track-record of bringing beloved franchises to mobile in a way that both respects and expands universes like The Walking Dead,” said Dan Murray, President of Skybound Interactive. “It’s obvious the team has genuine love for these properties and seeks to capture the essence of the IPs with which they work, just one of the reasons we wanted to work with Disruptor Beam. They’ve delivered an authentic representation of the comics on mobile devices with The Walking Dead: March To War. We’re thrilled that this new game will feel very familiar to fans of The Walking Dead.”
“No one is safe in March To War, least of all those who think they are,” said Joey Lapegna, Creative Director at Disruptor Beam. “Our goal, above all else, was to make March To War not just play like a Walking Dead game, but to feel like one too – an approach we take with all of Disruptor Beam’s games. Players will live and die by the alliances they keep, the enemies they create and the uncertainties that lay between, forced to choose carefully between aiding or destroying other players in their struggle to survive. Brace yourselves: It's about to get bloody.”
To survive in The Walking Dead: March To War, players must:
●     Fight to survive by fending off walkers and other players, building and managing your base and defenses, and scavenging for vital resources.
●     Form alliances with other players -- knowing that your greatest friend today could become your greatest enemy tomorrow.
●     Lead your community by training your loyal survivors, recruiting iconic Walking Dead characters such as Negan and Rick to be powerful council members, and by making critical decisions that directly affect the game.
The Walking Dead: March To War is available now for free on the Apple App Store and Google Play in four languages (DE, EN, ES, FR), with additional languages coming soon. Fans can register to receive game updates atwww.MarchToWar.com and can also follow The Walking Dead: March To War on Facebook, Twitter and Instagram.
About Disruptor Beam
Disruptor Beam turns the world’s greatest entertainment brands into successful games loved by highly connected customers. The Boston-area company connects fans around popular franchises including Game of Thrones™, Star Trek™ and The Walking Dead™ through story-rich and socially-driven strategy games. Disruptor Beam released Game of Thrones Ascent in 2013, Star Trek Timelines in January 2016 and is now adding The Walking Dead: March To War to its portfolio. Disruptor Beam games can be played across a variety of mobile devices, as well as other platforms including Facebook and Steam. Founded by game-industry veteran and entrepreneur Jon Radoff, Disruptor Beam is backed by GrandBanks Capital, Romulus Capital, Google Ventures and Converge Venture Partners. For more information visitwww.DisruptorBeam.com
About Skybound Entertainment
Founded in 2010, Skybound Entertainment is a multiplatform entertainment company that houses projects ranging from television, film, digital content, comics, interactive gaming, and live events.
Skybound Entertainment is responsible for such television hits including The Walking Dead, Fear the Walking Dead and Outcast. Moving into the digital content space, Skybound produced the first-ever narrative VR series, Gone, for Samsung’s Milk VR platform and in 2017 will produce VR horror series Lies Within, which is the first project out of Skybound’s partnership with interactive theatrical company Delusion. Skybound recently announced the film adaptation of Robert Kirkman’s second-longest running comic series Invincible, with Seth Rogen and Evan Goldberg attached to direct, write, and produce the movie for Universal.
Additional newly announced Skybound projects include Five Year, Mastermind and Robert Kirkman’s Secret History of Comics.

Sony lists the devices that will get Android Oreo 8.0