Ricoh is actually an old name in the young market of 360-degree cameras. The original Ricoh Theta was one of the first cameras of the type on the market in 2013. And, as the popularity of VR content has grown, so has demand for the Theta line of products. 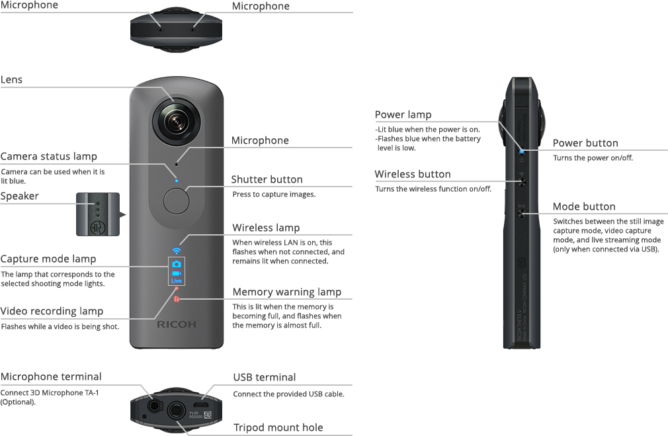 Spec-wise, the Theta V measures 45.2mm by 130.6mm by 22.9mm, so it's a pretty dinky unit. It comes with a built-in 19GB of storage, expandable via microSD, but it's also able to connect to your phone over either Bluetooth or Wi-Fi, so you can quickly and easily transfer content back to your device. At a resolution of 3840 x 1920, it's able to capture 360-degree content at 30fps. The camera is powered by an unnamed Qualcomm Snapdragon SoC and has a new plugin system for adding additional functions.

Be sure to tilt and pan around the sample video

I've never used a 360-degree camera, but Theta V looks pretty nice. On my 1600p monitor, this demonstration video isn't perfectly sharp, but the detail is still incredible, and the Spatial Audio is uncanny with a pair of headphones.

Two accessories for the Theta V were announced at the same time. The TA-1 3D microphone is designed specifically to work with the 360-degree camera, and the TW-1 Underwater Case allows you to use it at depths of up to 100 feet/30 meters.

The Theta V can connect to and be controlled by any Android or iOS-based smartphone or tablet using the Theta S app. Connection is either via Bluetooth low energy (BLE)—which enables an "always-on" connection between a camera and phone—or Wi-Fi, providing users with greater flexibility in how they wirelessly control the camera and upload images through the Theta S app. Built-in 19GB storage allows for up to 4,800 stills and approximately 40 minutes of 4K (H.264) video to be stored.

A new and unique feature of the Theta V is that Ricoh will be able to create new functions for the camera via software plug-ins. The first of these plug-ins was developed by Ricoh and is already integrated into the phone. It enables the Theta V to deliver the world's first remote playback capability in a commercially-marketed, fully spherical camera. Using a compatible wireless display adapter, it is possible to mirror playback of 360-degree still images and video data stored on the camera. This allows users to enjoy powerful 360-degree video a large screen monitor or via a projection display.

"The Theta V represents a number of breakthroughs in 360-degree imaging, all geared to make it easier for anyone to capture and get the most out of their 360-degree stills and videos," said Kaz Eguchi, president, Ricoh Imaging Americas. "In addition to extremely high-quality video, our new 4K camera offers truly realistic spatial audio and the easiest approach to sharing—via our industry-first remote playback function. We are proud of the Theta V, and expect consumers and businesses alike will benefit from our new camera."

Two accessories are being announced with the Theta V: the 3D Microphone TA-1, designed exclusively for use with the Theta V, which is intended for use when shooting music or theatrical performances as well as for outdoors; and in October, the Underwater Case TW-1, which allows use of the Theta V (as well as the Theta S and SC) at underwater depths up to nearly 100 feet (30 meters).

The Ricoh Theta V is available for pre-sale today for $429.95 at www.us.ricoh-imaging.com and retail outlets nationwide. The 3D Microphone TA-1 is also available today for $269.99, and the Underwater Case TW-1 will be available in October for $199.95.

"Qualcomm Technologies is empowering a comprehensive 360/VR ecosystem from our connected camera platforms to VR HMDs, aiming to allow manufacturers to deliver solutions for content creation, communication and consumption," said Raj Talluri, senior vice president, product management, Qualcomm Technologies, Inc. "With the launch of the Ricoh Theta V 360 camera, built on the Qualcomm Connected Camera Platform, we are very excited to bring superior connectivity and powerful compute capabilities to the 360 camera industry, which we believe will be an important content generator for VR."

"The Ricoh Theta V is the first Street View Mobile Ready camera to be certified by Google. This distinction means that RICOH THETA V owners will be the first to experience the all-new auto mode, which allows you to create Street View imagery while you walk, bike or even drive—a huge improvement over having to photograph and connect individual 360 photos," said Charles Armstrong, product manager for Google Street View: "The Ricoh Theta line of 360 cameras has consistently set the bar for combining quality, convenience, and affordability in a single product. We're excited to offer our avid contributor community such a powerful new option for Street View authoring."

In addition to the new Google Street View Mobile Ready certification, Ricoh's existing Theta S and SC cameras have also gained been certified as Street View Workflow Ready for their abilities to shoot individual 360 photos and publish them to Street View.

The company now known as Ricoh Imaging Americas Corporation was originally founded in 1919, under the name Asahi Optical Joint Stock Co. and launched its first SLR camera in the 1950s under the PENTAX name. Today, Ricoh Imaging Americas Corporation continues to produce the heritage-rich, award-winning line of PENTAX DSLR cameras, lenses and sport optics equipment as well as Ricoh's offering of stylish and compact digital cameras, known for their wide-ranging, rich set of features.

Users can directly post 360-degree spherical images shot using the camera to Facebook, YouTube and other social and messaging services, upload them to the theta360.com dedicated website and share them on social networks such as Twitter and Tumblr. Unique cropped images can also be shared using Instagram. It is also possible to submit captured spherical videos and images to Google Maps™.

2. 4K compatible high resolution 360-degree video
The camera can shoot high-definition, smooth 360-degree video at 30 frames per second at a resolution of 3840 x 1920 pixels, which is equivalent to 4K. Users can enjoy greater realism by creating immersive VR video content and watching video on a large screen. In addition to supporting the H.264 file format for video recording, the more recent video compression standard of H.265 is also supported in anticipation of future applications based on the API release.

3. 360-degree spatial audio recording that reproduces overwhelming realism
The camera has a 4-channel microphone that supports 360-degree spatial audio recording built into its body. Omnidirectional audio is recorded not just in the horizontal direction but also in the vertical direction, making it possible to reproduce sound and video as it was in the environment where the video was shot by linking 360-degree video and audio together. Furthermore, using the dedicated accessory "3D Microphone TA-1" (optional) scheduled for launch with the camera will allow users to pick up natural sound with a large volume of information at low to high frequency. The 3D Microphone TA-1 is equipped with a microphone unit developed by Audio-Technica Corporation.

4. High-speed data transfer
The communication speed is now approximately 2.5 times faster than with previous Theta models, based on Ricoh testing. This enhancement was achieved by improving the wireless communication module and increasing the data processing speed. It enables the large volume of image data that accompanies higher-resolution images to be efficiently transferred and browsed.

7. Functions can be added using plug-ins
The Theta V is based on the Android operating system, which allows its functionality to be easily extended via smartphone applications. Various plug-ins are currently under development.

A function that significantly speeds up the transfer speed by performing a composite process for 360-degree video shot in a camera fixed in position within the camera first and not during the time of transfer
A client mode that allows the camera to operate as a client and simultaneously connect to the Internet over a wireless LAN router environment
9. Support for 4K 360-degree live streaming output
Real-time output of high resolution, 360-degree spherical video equivalent to 4K is supported. This makes it possible to share a scene over the Internet—such as a concert, meeting or other event—enabling the viewer to feel as if he/she was actually at the shooting location. Live streaming requires a computer with high-performance image processing and a high-speed communication environment to transmit.

Can shoot using an ultra-fast shutter speed of up to 1/25,000 seconds
Supports high sensitivity shooting at ISO3200 (using manual mode with still image)
Internal large capacity memory of approximately 19 GB which can store approximately 4,800 still images
The THETA+ application can be used to edit still images and export image data files for printing
The THETA+ Video is a specialized smartphone app that enables editing 360-degree videos taken with Ricoh Theta cameras
Improved accuracy for top/bottom correction processing using a combination of a newly equipped gyro sensor and internal acceleration sensor
The minimum interval with interval shooting has been reduced to 4 seconds, which is approximately half the interval time provided in the Theta S
Using an underwater housing (optional), 360-degree underwater shooting can be done to a depth of 100 feet (30 meters)
Optional accessories

A Ricoh Theta V-dedicated 3D microphone. Equipped with a microphone unit developed by Audio-Technica Corporation, a company recognized for its high technological strength and reliability. The microphone can pick up deep sounds at middle to low frequency due to the directional microphone with a large aperture at approximately 10 mm, compared to built-in microphones. This makes well suited to shooting musical performances. Also, attaching the included wind screen to the microphone allows video to be shot with reduced wind noise when outdoors.
Accessories: Wind screen and pouch

This underwater housing is waterproof up to a depth of 30 meters (equivalent to JIS Class 8 waterproof standard) to achieve 360-degree underwater shooting. A mechanism on the case enables a user to trigger the camera through the case. It is compatible with the Ricoh Theta S and SC models as well as the Ricoh Theta V. The case's surface has a scratch-resistant, anti-reflective coating, and the case is equipped with a tripod socket to allow its use with monopods and other camera accessories.
Accessories: Carry case, strap, silicon frame (for installing on Ricoh Theta S)
Compatible models: Ricoh Theta V, Ricoh Theta SC and Ricoh Theta S

©2017 Ricoh Imaging Americas Corporation. All rights reserved. All referenced product names are the trademarks of their respective companies.

Star Wars: Jedi Challenges will have you fighting lightsaber duels from your living room