I'll cut to the chase: if your primary concern with the LG G6 was that it simply didn't seem like a proper flagship phone, I can safely assure you that the new V30 is. Its 6" QHD+ OLED display finally brings LG smartphones into the OLED era, though I do have my concerns with this screen even having only used the phone for under a day. The Snapdragon 835 processor is the best chipset Qualcomm has on offer, so that's an easy sell, and LG's included its Quad DAC in all models of the V30 for maximum audiophile authority (I, for one, am pleased the V30 has a headphone jack at all). The all metal and glass construction combined with a surprisingly low weight make the V30 feel premium and modern - I'd go so far as to say this is a significant visual refinement even upon what LG achieved with the already-handsome G6.

LG has provided us a preproduction Korean version of the V30 for evaluation, and so far, I'm liking it. 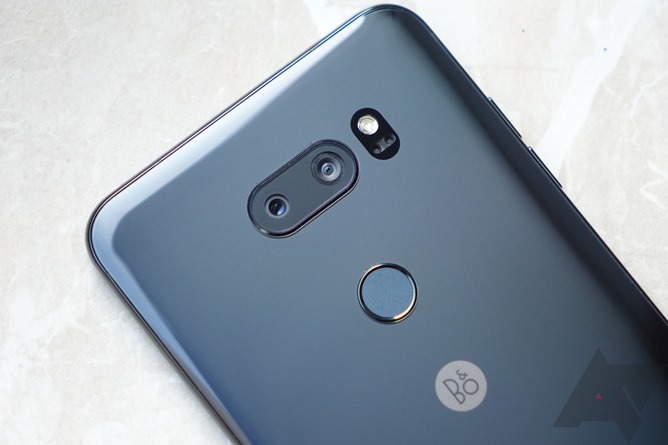 As I said, I really think the V30 takes what LG accomplished with the glass-sandwich design of the G6 and just makes it better. The V30 has more naturally curved, polished metal edges (very Samsung-esque), and the even further-reduced display bezel allowed by the OLED screen puts the V30 right up against the latest from Samsung in terms of sheer visual flare. The rear of the phone gently curves around the back to be more comfortable in hand, the fingerprint scanner is placed in an easily-accessible area below the camera module (safe from the risk of accidental lens smudges) and, like those of LG phones for the past couple years, doubles as a power key. The scanner seems fast and accurate to me so far. 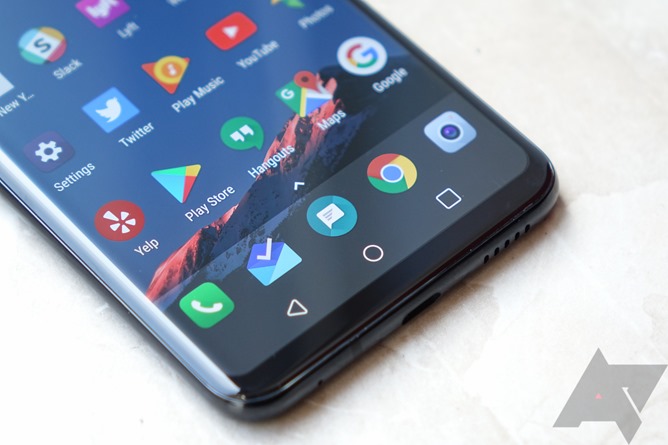 Despite being made of metal and Gorilla Glass 5 (both front and back, by the way), the V30 is shockingly light, at just 158 grams. That's actually 5 grams lighter than the G6. LG was mum on how exactly this was accomplished, but it does give the V30 a featherweight feel - it was something I noticed about the phone even before looking into the weight figures. 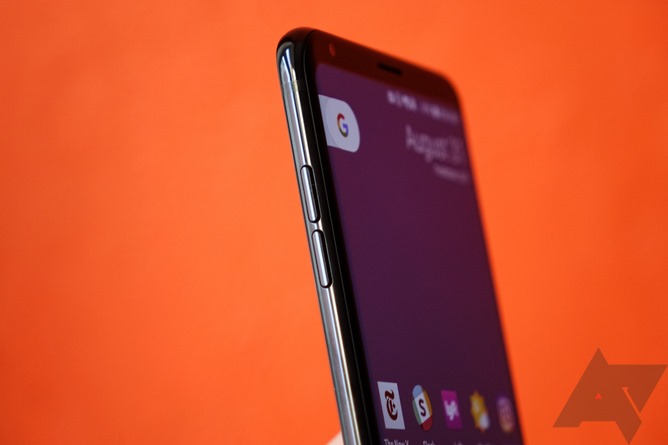 I can state confidently that this is the most refined smartphone LG's ever built from a hardware perspective. The V30 isn't necessarily what I'd call beautiful (is any phone, really?), but it's remarkably sleek, striking, and modern. Nothing about it feels cheap in the least.

You're probably curious about this OLED display, though. This is the first non-LCD smartphone LG's produced since the ill-fated G Flex 2, which used the first generation of LG's P-OLED panels. The screen was... not good. Frankly, it was kind of bad. Not as bad as the first G Flex, but poor enough that it was a notable negative when I reviewed it way back when. 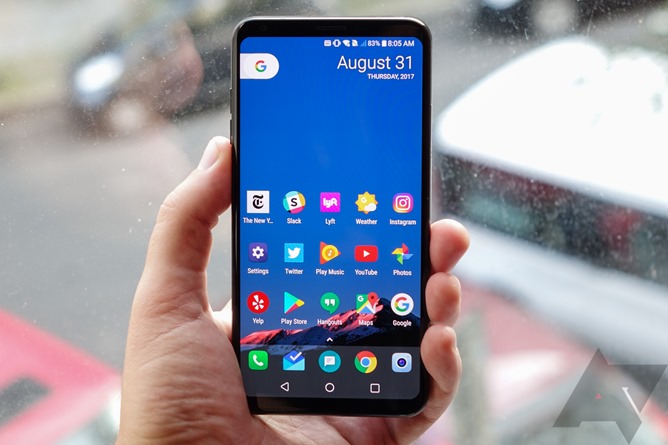 My initial impression of the screen is that it seems to get quite bright, it has helpful color modes similar to those on Samsung phones, and viewing angles are truly excellent. You get wonderfully low black levels, and the minimal bezel around the screen is genuinely impressive. Here's the thing: I'm already noticing banding patterns reminiscent of older Samsung OLED panels. They're pretty noticeable at lower brightness, especially on shades of gray. This is far from a deal-breaker - most people will simply never notice - but if you were expecting LG had upped its screen game to Samsung's level overnight, it's probably time to temper your expectations a bit.

I haven't had a chance to test audio from the headphone jack, but the bottom-firing speaker seems to get fairly loud, if a bit on the muddy side at extreme volumes. 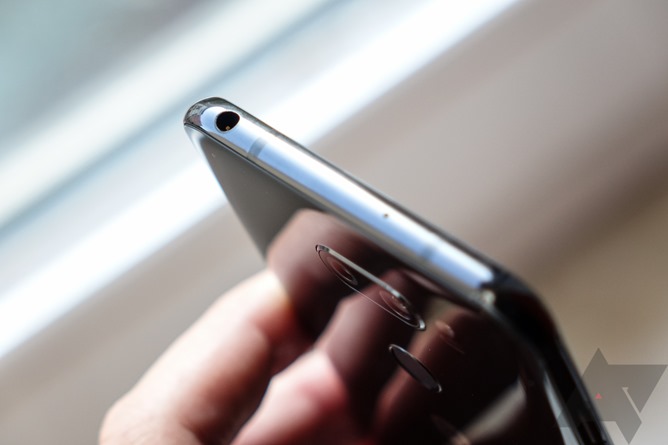 As far as the cameras are concerned, LG's opted for an f/1.6 16MP primary camera paired with a 120-degree wide-angle 13MP f/1.9 secondary lens, both notable upgrades over the G6 and V20. I simply have not had the time or real opportunity to test these cameras meaningfully yet, and as someone who is decidedly not a fan of LG's image processing, I'm hoping they've toned it down a little this time. The extremely wide aperture on the 16MP camera should allow it to gather quite a lot of light, but again, we'll have to see how it performs in the real world. 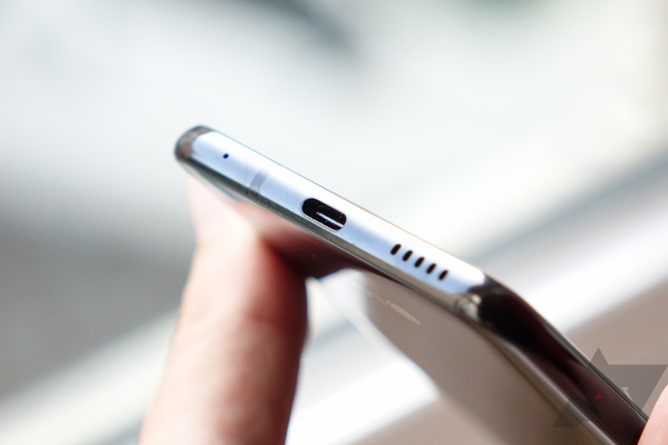 Finally, there's the battery. At 3300mAh, it's not huge, but I think given what we've seen Samsung accomplish with 3500mAh in the 6.2" S8+ that uses the same Snapdragon 835 chipset, there's no inherent cause for worry. We'll have to wait until we get a proper, production version of the phone meant for the US market to really evaluate this, though. 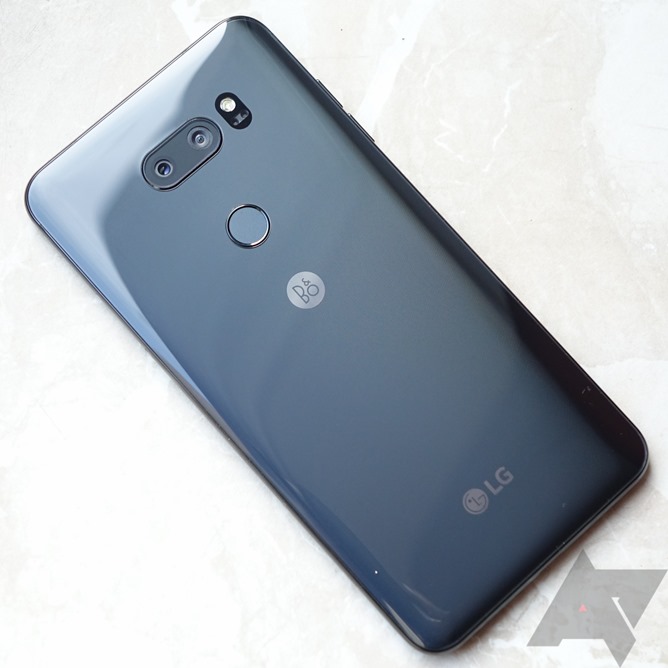 There are no major departures from LG's existing Nougat-based software on the G6 to be found on the V30. I also am testing a Korea-market version of the phone which comes loaded with a ton of bloatware I had to remove, and some of the various settings and options will probably vary regionally, as they always tend to with LG phones. 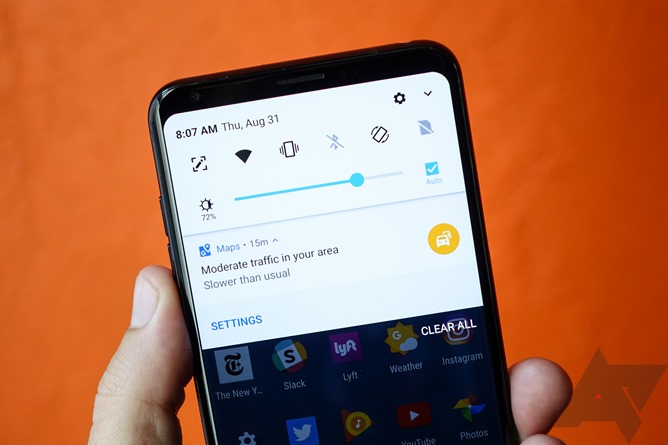 LG's skin really isn't my favorite visually, but it's easy enough to use and doesn't stray too far from stock Android functionally. There's an always-on display, a "floating bar" that LG kind of half-assedly claims acts as a stand-in for the old secondary display (it doesn't, not that I think the secondary display will be at all missed), LG's tap-to-wake feature, and most of the other light modifications you'd expect on an LG phone. Really, there isn't terribly much to say about this phone's software feature set that you couldn't say about the G6 - not that there's anything wrong with that, inherently, just to say that LG doesn't focus too much of its attention on Samsung-esque gimmickry. 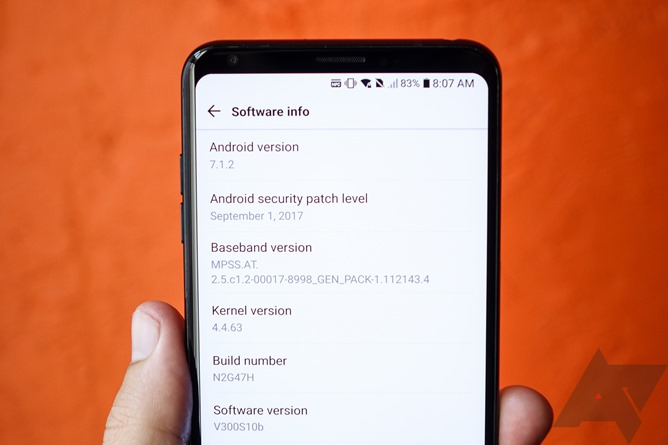 Performance seems absolutely excellent, I'm happy to report, and the V30 feels like it flies through most tasks effortlessly. It doesn't have quite the crazy responsiveness of the OnePlus 5, but it still feels very noticeably snappier than the Galaxy S8, for example. It splits the difference there nicely, with animations looking smooth and natural - but still plenty quick. 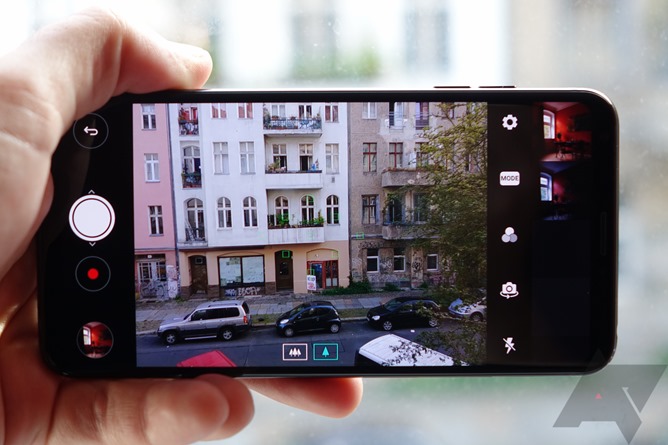 You get 64GB of storage on the standard V30, with a 128GB "Plus" model being available in some regions. Our Korean preproduction phone is a Plus model, and as far as I can tell, literally the only difference between the regular V30 and the Plus is the amount of storage.

The V30, to me, feels like LG's most cohesive smartphone in years (something I said of the G6 - but trust me, this is better). You're getting an excellent, modern display and design, cameras that clearly have been a focus of LG's product development, the latest processor, lots of storage, very good performance, and software that is, if not beautiful, at least not terribly messed-with.

I'll be using this preproduction V30 a fair bit in the coming weeks, but you'll only see our full review once we get a US retail unit in our hands that will properly handle the networks here, and is running software that's closer to finished. I've already encountered a few bugs on this tester, and that's not unusual, so I'll reserve my comments until I've used the phone in the state LG intends to ship it to customers. 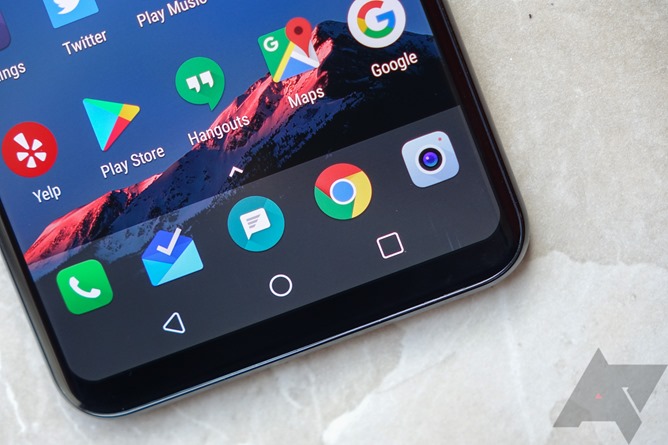 Amazon Prime Video returns to the US Play Store