Since time immemorial, DisplayMate has done a review on the screen of Samsung's upcoming flagship just before launch. Well, it's that time of the year, and they're at it again with Samsung's Note8. As you'd expect, all the numbers look pretty fantastic. But the most shocking by far is the 1,200 nits of brightness that Samsung's latest can spit out. I hope everyone saved their eclipse glasses.

The new 2960x1440 18.5:9 24-bit AMOLED panel in the Note8 uses the same flexible-substrate OLED tech Samsung is known for, topped with Gorilla Glass 5. As you'd expect, it uses a PenTile-type matrix for subpixels, which Samsung calls "Diamond Pixels" due to their shape. With the reduced bezels it's obviously just a bit bigger than the display on any other Note or Galaxy phone. But the coolest thing by far is the brightness on the panel.

It can hit a maximum of 1,200 nits, 22% brighter than the already ridiculous Galaxy S8.

The display also supports an even wider color gamut, user-adjustable white-point, improved color accuracy, improved viewing angles, a new hardware-based always on implementation, better auto-brightness control, better power savings modes, and it's certified for Mobile HDR Premium. Color calibration for the display is also fantastic, with a high degree of accuracy and coverage for each of the three color-spaces supported (sRGB, Adobe RGB, and DCI-P3). The white-point in most calibrated modes is also set very near 6500K.

TL;DR, it's a really good quality display, and that's all most of you need to know. If you want the full breakdown, though, continue on below.

Color news is a mixed bag, but that isn't the Note8's fault. Although the display has a large gamut (with 112% DCI-P3 and 141% sRGB coverage) and great color accuracy, since the Note8 ships with Nougat anything past sRGB coverage will be useless in most apps. Although Android O will have better native support for wider color gamuts, expanded coverage in most apps just results in over-saturation, making sRGB about as good as it gets most of the time, though there are exceptions. 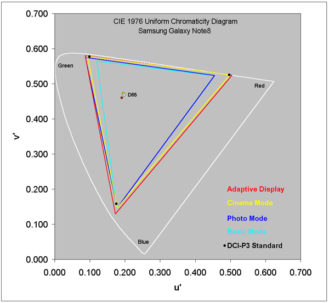 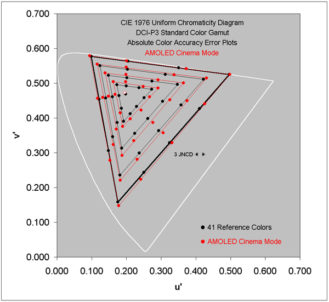 Color coverage for each display setting (left) and accuracy in the widest setting, DCI-P3 (right)

Colors on the Note8's screen appear to be just the tiniest bit over-saturated, but any deviation is going to be small. Overall it looks like an accurate calibration across DCI-P3 (Cinema Screen Mode), Adobe RGB (Photo Color Mode), and sRGB (Basic Screen Mode). At 500 lux they measured 91% accuracy for sRGB, which isn't bad. As long as you set the right mode for your content (again, 99% of the time on Android this means sRGB/Basic), you should see some good color accuracy.

It also ships with an Adaptive Display Screen Mode that dynamically adjusts the display based on content, which can hit incredible levels of color saturation, if you're determined to have things be as inaccurate/"vivid" as possible. It also has a Blue Light Filter which does exactly what you expect, and it isn't an additive overlay. That means when you flip it on at night the display doesn't get any brighter to make colors warmer, and you don't have to deal with washed-out gray-reds instead of black.

The white point values are also quite good and very near 6500K in each of the gamut-configured modes. In adaptive mode, though, you can only set it to between 6,800K and 8,800K, which is cooler than ideal.

The Note8 has three adjustable Power Saving Modes that can reduce the display power by lowering brightness and changing background colors. Compared to the Galaxy S8, the new display uses 2-8% less power (depending on brightness) for the same given unit of brightness/area. It's not a tremendous increase, but it might make a bit of a dent.

Brightness, contrast, and color-shift for off-angle viewing are nearly identical to the display on the Galaxy S8. That is to say, they're pretty fantastic, and you shouldn't run into any problems there. Screen reflections are also about the same as the Galaxy S8, and both phones are right up against the lowest measurements DisplayMate has ever recorded.

Overall, the Note8's display is bound to please, and it's almost certainly one of the best ones you can buy. At least, if things like a 1,200 nit max brightness and accurate colors are details you care about.