We don't often cover WhatsApp Web here since it's not exactly Android, but it's related enough to the Android app that we do make an exception every now and then when there's something worth talking about. Today is one of those examples, but it's worth pointing out that some of these changes aren't new and have been there for a while — maybe even for a month or two. But again, we had to wait until there was enough news to warrant a post.

WhatsApp has been pushing its Status (despite not a lot of people using it) and the feature has made its way to the desktop. It's been available for the past four days, approximately, though it depends on which WhatsApp Web version you're running (it requires 0.2.5854 or newer) so you may need to close the browser tab and reopen it to see it.

The new Status will show as a cutout circle on top of the left tab, next to the new chat and overflow menu buttons. It'll have a green dot when there are new statuses for you to see. Tap on it and you're taken to a black screen like the one on top of this post with a list of statuses on the left. You can then view and comment on any of those and view activity on your status, but it doesn't appear like you can upload a new status for yourself.

We use Slack all the time to communicate internally at Android Police, so I'm very accustomed to typing :dance or :happy (I'm a cheerful person) and :angry when someone makes a typo in a post (here's looking at you, Matt and Jeff!). You can imagine that this habit is hard to break when you're on any other app or site. So I've often found myself typing :bulb when I had a smart idea in WhatsApp, then cursing under my breath and moving my hand to the mouse to select the emoji manually.

The colon suddenly started working in WhatsApp Web several weeks ago. I could insert any emoji by just typing :emoji_name and it works just like emoji search so you don't have to technically know its exact name, just a logical word that might describe it. For example :light and :bulb both give you the light bulb, and :eye gives you everything from the rolling eyes to the two eyes to the eyeglasses. Once you see your suggested emoji, you can use the arrows on your keyboard to select it. 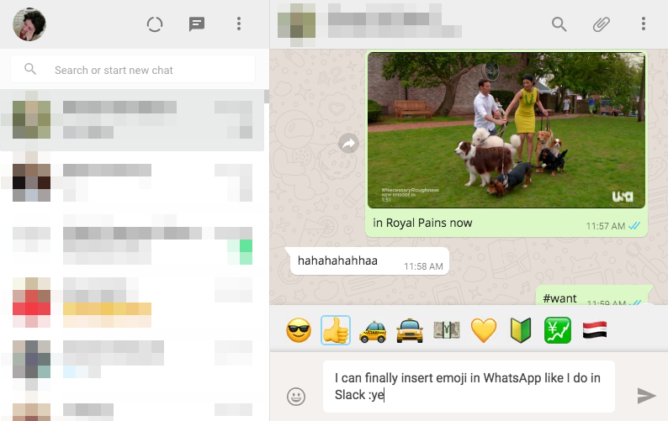 Finally, I can keep typing without interrupting my flow to go use the mouse/trackpad. Plus I don't need to look at 100 emoji faces to figure out which ones look the saddest, or go digging among thousands of emojis to find that one I'm looking for but that I almost never use and can't quickly find. I don't know if you're excited about this, but for me, it's seriously one of the best changes in WhatsApp Web since launch.

You might have guessed that I'm a keyboard shortcut aficionado, and this one falls into that category as well. I'm not sure when exactly, but WhatsApp Web has started converting keyboard shortcuts to emojis. It's really capricious though and sometimes works with some shortcuts then it stops, so I'm just mentioning it here because you might not have noticed it but I don't recommend you trust it all the time.

For a while, it was automatically converting :) and :( to their respective emojis, but that doesn't seem to work now and it looks like you need to add the - for the nose. Right now, I've verified that these emoji shortcuts work and get converted to their respective symbol:

There might be more, but I haven't tried every shortcut. Again, this one is quite fickle, so your mileage may vary on which shortcuts automatically convert to an emoji and which ones stay as text. 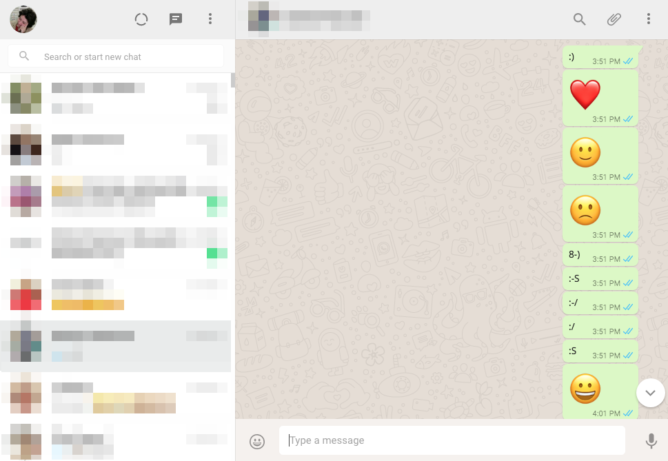 That's it for the most notable WhatsApp Web features that were added in the last few months. Note that they might work on the desktop version of WhatsApp too, but I don't use that to be able to verify it. If you've discovered other noteworthy changes, please share them with us in the comments and remember that you can always send us tips when you discover something new. We may not always cover them, but we do read every single one.