Battery statistics in the settings saw a considerable makeover in the developer previews of Android 8.0. In Nougat, the battery usage screen showed everything that had an effect, and screen on time was part of this list. With the Oreo developer previews, this was changed a bit to show more granular statistics showing screen on time per app and separating overall screen time into its own section. This helps you figure out how much an app is doing in the background, and while the change was welcomed by most, some users still wanted the option to view things the more traditional way. That's now possible, with a 'show full device usage' option in the three-dot overflow menu.

This was noticed by regular AP tipster Zachary Kew-Denniss after updating to the final version of Android 8.0 Oreo, but it appears it was already there in DP4. It may have been present earlier but the first mention of it on the web was from just a few days ago. As you can see from the screens below, enabling the setting changes the list from 'app usage' to 'device usage,' making it more similar to how it was displayed in Nougat. 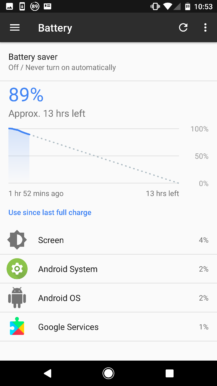 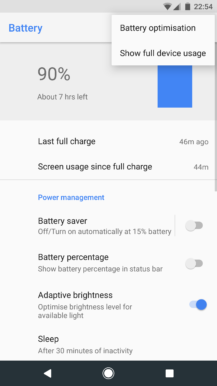 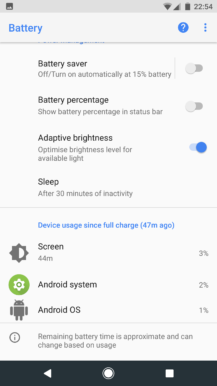 It's good to see that Google was listening to those who wanted to see this view reinstated, but it's worth noting that there are still things people aren't happy with. For example, many want to be able to access the battery graph from quick settings as was possible in Nougat. Getting to that graph now takes several more taps, as it's hidden behind the battery diagram on the settings page. It's also no longer possible to see the graph with history stats, the loss of which many are bemoaning. Let us know what you think of the new look battery stats in the comments.

[Freebie Alert] Get 3 months of Plex Pass for free with discount code ($14.85 value)