ChromeOS development is on fire these days. Just yesterday we got news that we'd have a new setting for closing the lid on a Chromebook. And today we find out that a new automatic Night Light feature is inbound and has just entered the Canary channel. If you've ever used Kindle's Blue Shade, f.lux, or LineageOS' LiveDisplay feature, then you know that this means. If you aren't familiar with any of those, think a red-tinted mode for use at night. 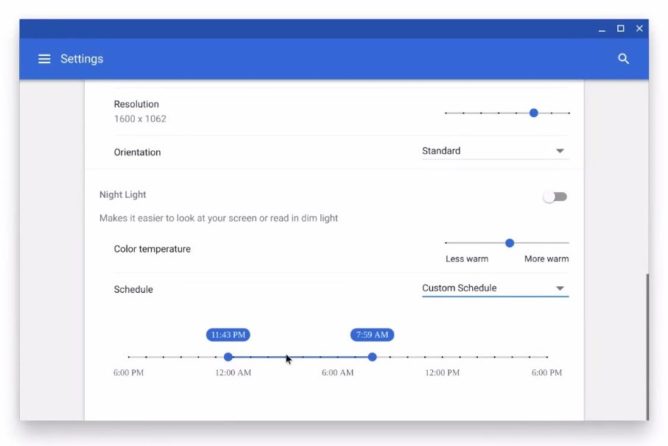 For anyone who isn't familiar, the proliferation of night mode display options in different electronic products is a result of recent research, much of which demonstrates that red light does less to interfere with sleep patterns at night. The idea is that by having your display tint red at night, use of that display at night is less likely to interfere with your sleep. And soon ChromeOS will be another software example.

I've been using similar features on all the devices I can, but while I've noticed a positive impact, YMMV. Sometimes a night mode can be a minor inconvenience. For instance, if you are doing work that might need color accuracy and you forget to disable it.

The new changes have just been pushed to the Canary channel, so it might take a few more release cycles (another few months) for the feature to hit Stable. The feature is currently present in non-automatic form in the Beta channel (v60). If you want to check out the full details, you can see a quick video on how the new setting will look and operate over on François Beaufort's post. It can be set both manually or according to a schedule, and the latter mode comes with a timeline and a pair of sliders, for selecting the period which you'd like to have it apply.

The automatic night mode has hit the Chrome OS Dev Channel, but is otherwise unchanged since it was in Canary. If you want to switch your Chromebook to the Dev Channel, it only takes a few clicks.