A new version of Google Photos is rolling out to users today. Noticeable changes seem to be pretty scarce in both this release and the previous v3.2 update, or at least we haven't seen much in the way of differences. However, between the two, there are a few things to talk about. Today's update brings a little cleanup work to the Settings screen by grouping notification options together, as well multi-selection support in the shared libraries screen. There are also clues about a new themed video creation, enhanced rules for auto-saving shared photos, and some cost-saving measures for Airtel subscribers in India.

Unofficial Changelog: (the stuff we found)
* Grouped all notification options from Settings screen into a dedicated page
* Shared libraries viewing screen now has a "Select" command (which may be a mistake) 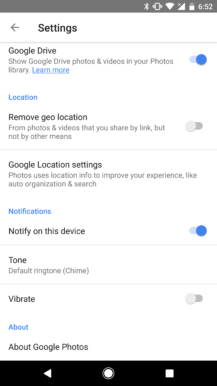 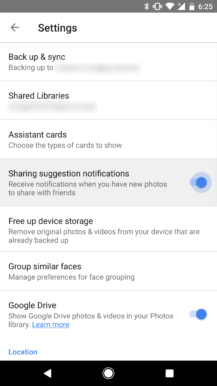 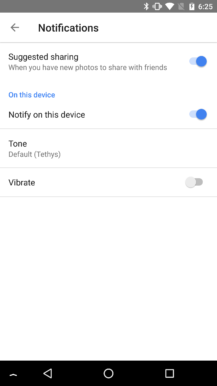 As apps mature, the configuration options are bound to grow in number and a little reorganization can help to clean things up. That's what this is about. The Photos team has taken all of the notification-oriented settings and given them a dedicated screen where they can reside peacefully. Also worth a quick mention, the order of items in the Settings screen has been changed, but nothing else has been added or removed.

Shared libraries has a "Select" command

If you've used Photos with any regularity, you've probably stumbled across the select command in the overflow menu of most screens. It's a way to begin multi-select mode, which can also be done by long-pressing on a photo (and optionally dragging to select several at a time). This option was previously missing in the viewer for Shared Libraries, but it's now there. 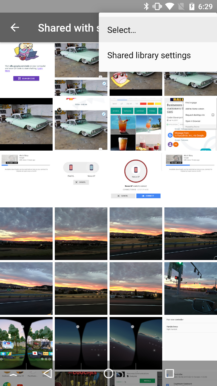 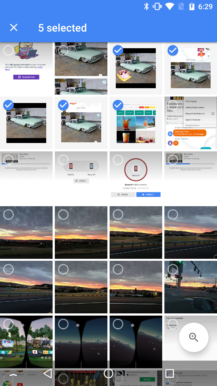 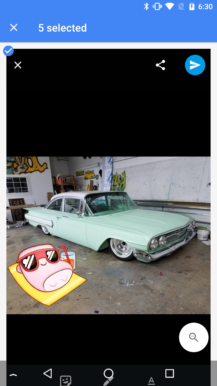 But there's a bit of a problem in this update. It seems you can't do anything with the selected pictures. Aside from a FAB for zooming in, where you can further change which images are selected, there are no action buttons to do things like share or delete images. I would expect to see this fixed in the next update. All the same, I'm pointing it out now because some people have complained that this screen wasn't very functional and they wanted more control over the images in shared libraries.

Rules for auto-saving from shared libraries

Note: This section was removed as it turns out that the feature is already live and working for others, and probably has been for a while. For some reason it's not working on my account or one of my test accounts. It's bound to happen from time to time. Go ahead and disregard this section. – Thanks, Salim.

This one is for our friends in India with Airtel service. Google Photos is going to have the option to wait to perform backups until night so data won't cost a thing. Obviously, this is a good thing when the cost of data is quite high and it's possible to offset the backups to a time when they can be done during off-peak hours.

To be fair, I'm not in India and I have no idea if this is already in effect. Either way, it's good to see Google working with the carriers to bring costs down.

Astro File Manager gets a complete redesign in v6.0 beta