Google recently showed ads on Facebook in Indonesia inviting users to test a new app. Those who saw the ad and signed up have started receiving a link to try an experimental new search app from Google called Search Lite or, technically, Search (Test App) which looks targeted at the Indonesian — and maybe Indian — market.

Following the trend of all "lite" apps being released lately, Search Lite aims to make things faster and more data-friendly for some markets by working on slow connections, supporting offline features, using less data and thus taking much less time to finish tasks. It's unclear to me if the app size is also reduced (I can't view the Play Store listing), but it should technically take less space on your phone when installed and require less RAM to operate.

Apart from those distinctions, the Search Lite app tries to make everything easier to get to. You can change between a couple of languages by swiping the main app's page sideways, and you get several icons for quick access to some features beside search, like news, translation, weather, cricket scores, recipes, movies, songs, and more. Of course you can personalize those and remove the ones you don't care about. It feels like the regular Google Search + Feed app we all know, but with less preloaded data and easier control over what you see. 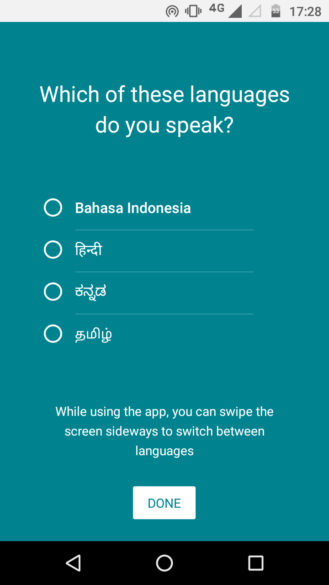 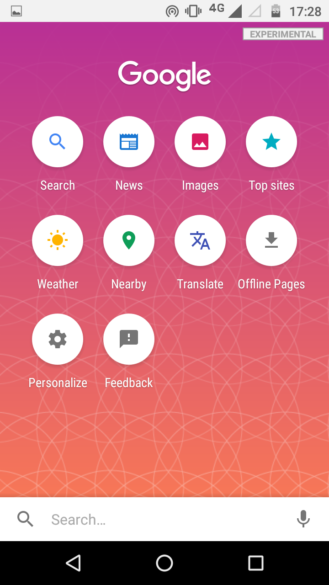 Just like the regular Google Search app, Search Lite can perform voice and text searches, but the search bar is more easily accessible on the bottom of the display and shows suggested keyword additions just on top of it when you perform a search.

The app's settings allow you to confine results to just lite web pages and to force the app to use its internal browser instead of opening through your default browser. The first appears to be tunneling all pages through Lite Mode, the descendant of Google Web Light (which is different from AMP as it works on all sites and doesn't require the web dev to implement it) that we've seen in News & Weather and in the regular Google Search app. As for the second, I'm not sure if it's really an internal browser or if it's using Chrome Custom Tabs. I'm inclined to think it's the latter, but maybe it's really a separate internal browser. 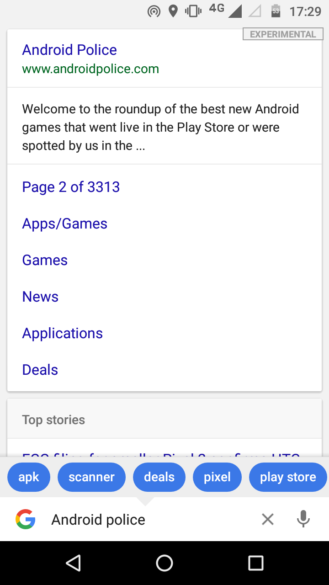 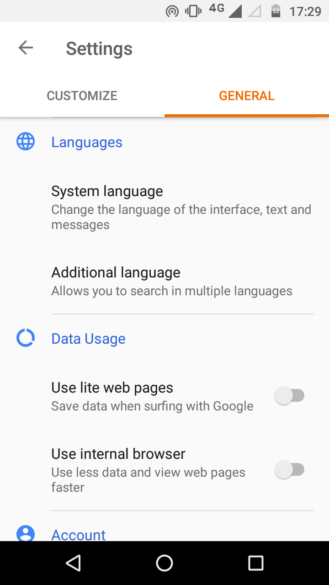 As you can see from the screenshots, Search Lite is still marked as Experimental so things will likely change as the app is used by more people and more feedback is collected with time. From what I can tell, it does look like a good start and the idea reminds me a little of Triangle, the data saving app that Google is testing in the Philippines. Saving data is the new trend nowadays (many companies really cornered themselves by ballooning all their apps into untenable sizes and requiring lots of data use) and I'm starting to wonder if Google, or any other company releasing "lite" apps, will make these available worldwide. After all, it's not just one or two countries that might benefit from them, but there are plenty of regions worldwide from the US to the UK to India and Indonesia and more, that suffer from slow or spotty connections and where users would love the option for a more data-conscious app.

If you want to give Search Lite a try, you have to be in Indonesia to even view the app's listing on the Play Store and you might also need to already be on the pre-approved list for testing. Let us know if you've tried it and what you think of it.

We have the link to the file over on APK Mirror. Head on over and download it; we were able to use it in English it by selecting the top language option "Bahasa Indonesia."