Wearable tech may not be doing so well these days, with companies like Motorola pulling out of the smartwatch game and Google Glass not having the greatest reputation with the public, but that doesn't mean everyone's giving up on it. Ubiquiti has debuted the FrontRow, a wearable camera with a round display that enables the "effortless capture and sharing of life's experiences." Oh, and it's $400.

FrontRow is being made and sold by Ubiquiti, a tech company that currently sells various networking products. The aim of the device is to allow you to share your experiences from a first-person view without having to mess up your own experience. So while you're watching a concert, you can quickly toggle a livestream through a variety of social media networks (Facebook Live, YouTube Live, or Twitter Live). The concept reminds me a bit of Casey Neistat's now-defunct Beme, which also attempted to provide viewers with a live visual without compromising the streamer's own experience.

Spec-wise, this is definitely an interesting piece of tech. Front and center on this 55-gram device is a round 1.96" 640x572 LTPS display (yes, it does have a flat tire). It's powered by an unnamed quad-core processor and 2GB of RAM, and it has 32GB of storage. Two cameras are on board, with one on each side. The main camera sports an f/2.0 8MP 140-degree wide-angle lens, which should make the device's goal of capturing life's experiences easier, while the other is a 5MP unit with an f/2.2 aperture. Other hardware includes two buttons (power and media), a capacitive home key, a 1W speaker, an LED, a connector, and a USB Type-C port. And yes, it's powered by Android.

Users will be able to not only live stream on Facebook, YouTube, and Twitter, but also utilize integration with apps such as Dropbox and Spotify. Third-party app development is being encouraged to add even more functionality in the future. The FrontRow app (which is already out on the Play Store) allows the device to connect to your Android or iOS smartphone via Bluetooth 4.1, and you can even use a web UI controller on FrontRow's site should it come to that. 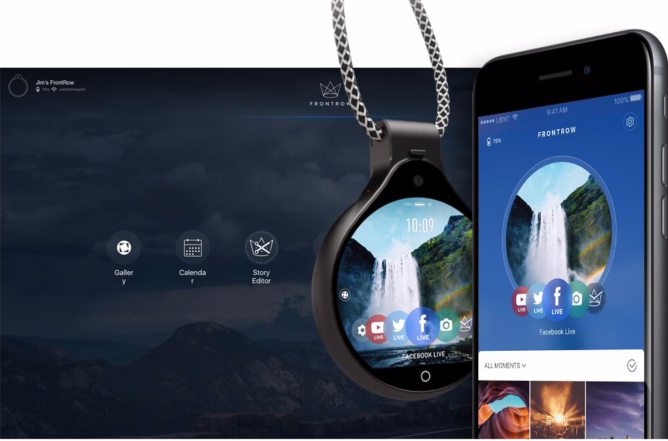 Battery is obviously a big concern with these types of products, but FrontRow's claims are actually pretty impressive at 48 hours of standby, 16 hours of Story Mode (a time-lapse), or 2 hours of live streaming. Given the size of the thing, that's not bad. And once it does run out of juice, it can be recharged via its USB Type-C port within 20 minutes and by USB-C phones (but probably at a much slower rate). 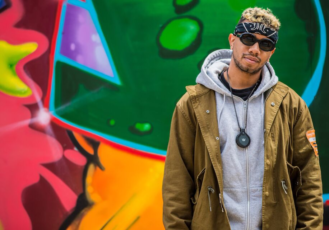 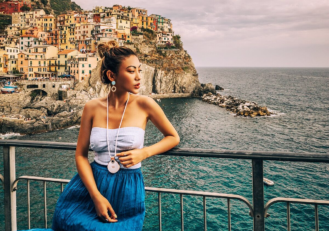 A couple of trendy and fashionable people in FrontRow's promo photos.

FrontRow is available for purchase now for $399.99 on FrontRow.com and Amazon. It comes in two colors: black and rose gold. Black is shipping now, but rose gold is listed by Amazon as having a September 15th release date. A lanyard is included in the box, as is a magnetic clip, but you'll also be able to use third-party chains, a car window mount, and a flexible coil mount when they come out.

FrontRow’s sleek, 55-gram (less than the weight of a typical smart-watch) form-factor was specifically designed to wear conveniently. Unlike traditional cameras and smartphones requiring manual operation, FrontRow can operate fully autonomously — allowing one to capture life’s experiences while completely staying in the moment.

A subtle interlocking connector provides the flexibility to wear FrontRow using the included stylish lanyard or multi-purpose magnetic clip, or third party chains. Upcoming accessories include a car window mount and flexible coil mount. FrontRow features cameras on both sides of the device. The primary camera features a 140 degree wide-view lens (roughly double that of a typical smartphone) that, combined with FrontRow's microphone array, allows for more complete capturing of experiences. The device features a speaker for local playback and an easy-access clickable media button that can be used to quickly start and stop many of FrontRow’s capture functions. FrontRow has a standby time of up to 48 hours and is capable of capturing in Story Mode (time-lapse capture of experiences) for up to 16 hours and in Live-Streaming Mode for up to 2 hours. With its USB Type-C connector, the device can be charged on the go using other Type-C smartphones and has a quick-charge time of around 20 minutes.

FrontRow’s user experience is unlike any camera brought to market. Built around a custom 2-inch circular hi-resolution touch screen, FrontRow’s user interface allows instant live streaming on social networks including Twitter, Facebook, and YouTube, as well as integration with a variety of popular applications like Dropbox, Spotify, and more. Fast Bluetooth allows effortless connectivity to smartphones running the FrontRow App (iOS and Android compatible) and provides seamless captured media transfer along with powerful remote control capabilities. The device can also be accessed (even remotely) through the Internet using the web UI controller at frontrow.com.

Not Just a Device, A New Platform

Although FrontRow’s user experience and graphical user interface are unique, its underlying operating system was designed to be Android-compatible in an effort to open up 3rd party application development. Users and developers are welcome to openly discuss new applications and shape the future of the platform — directly with the FrontRow’s engineering team on community.frontrow.com.

Ubiquiti Labs is the consumer electronics division of Ubiquiti Networks, Inc. (NASDAQ: UBNT). Ubiquiti Networks, Inc. currently focuses on 3 main technologies: hi-capacity distributed Internet access, unified information technology, and next-gen consumer electronics for home and personal use. The majority of the company’s resources consist of entrepreneurial and de-centralized R&D teams. Ubiquiti does not employ a traditional salesforce, but instead drives brand awareness largely through the company’s user community where customers can interface directly with R&D, marketing, and support. With over 70 million devices shipped in over 200 countries in the world, Ubiquiti aims to connect everyone to everything, everywhere. Ubiquiti was founded by former Apple Engineer Robert Pera in 2005. More insight about the company management can be found at www.rjpblog.com. Samsung Gallery is now available on the Play Store