Although it might not always seem like it, UX is paramount to Facebook's devs. They want to make engagement with the app as easy as possible in order to persuade users to keep coming back for more. Every change they make is rigorously tested, a difficult task given UI preferences are highly subjective among the app's billions of users. For that reason, we don't see too many changes. Over the next few weeks, Facebook is going to roll out some of the biggest visual adjustments we'll have seen for quite some time.

The first thing you'll notice will be the changes to the newsfeed (above image). In a bid to improve readability, the color contrast has been increased, making the text more legible. Link previews are also larger, with a gray background, and profile photos have been given a circular outline. The iconography has also been updated, with the symbols for Like, Comment, and Share now hollowed out (reminiscent of Twitter's icons). 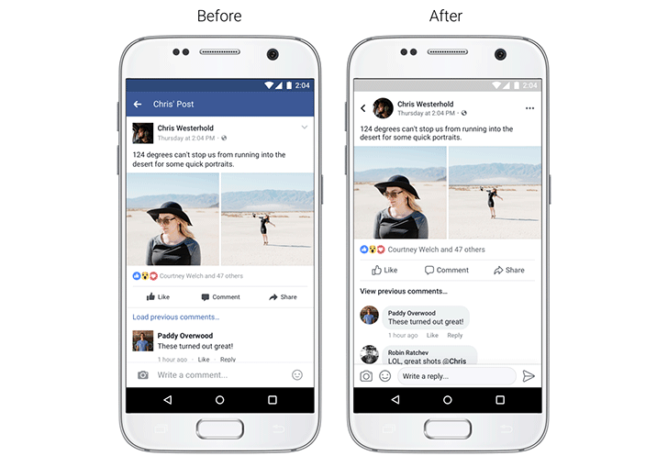 Tapping on a post now brings up a slightly different look, too (see above). The trademark Facebook blue header bar is no more, making more room for the content below. The status bar is no longer blue, either, and a more subtle gray has been opted for. The back button has been moved down beside the profile photo, while also morphing into a simpler arrow, and the additional options are now hidden behind a more standard three dot menu icon. 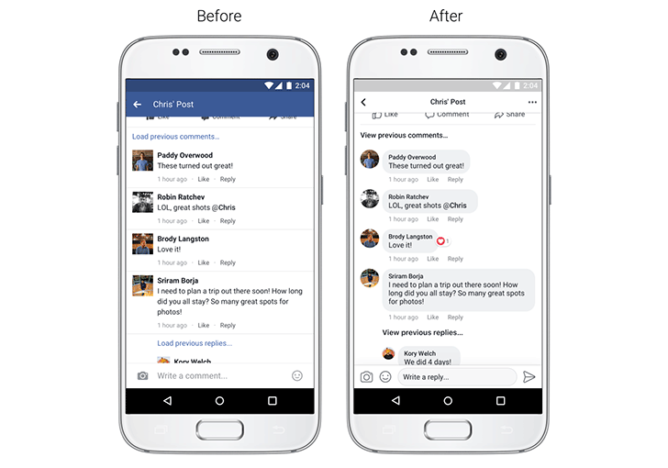 Perhaps the most notable differences can be found in the comments section (above). Scroll down and the post will be minimized to show just the title, back button, and menu dots. The comments are now similar to what you'd find in a messaging app, as they're enclosed in speech bubbles with a gray background rather than simply sectioned by horizontal lines. This does make each individual post stand out more, and I guess Facebook hopes this will make you more likely to add your own thoughts by making it seem more conversational.

So far I've only got the new iconography in my app, as have Richard and Artem, but expect the other changes to be rolled out gradually over the coming weeks, likely via server-side switches. If they've hit your device already, let us know what thoughts (if any) you have about the UI changes in the comments below.