A new update to Google's Allo app began rolling out to users today, bringing it to version 16. We're still looking for new features that may have gone live with this release, but nothing has turned up yet and the Allo team still hasn't posted anything about what to expect from this update. While we keep looking – and waiting for that web client – there is quite a bit in this update that warrants a teardown. There are a lot of small tweaks and features on the horizon, so let's get straight to it.

Allo for web appears in the nav drawer 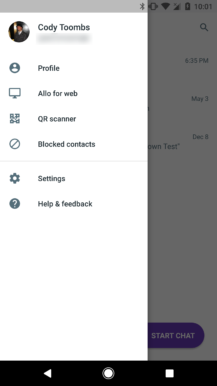 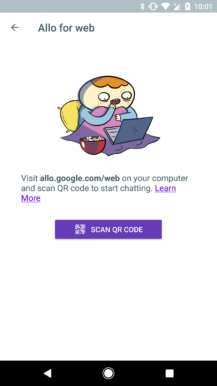 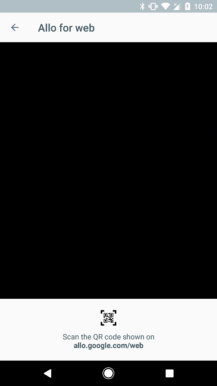 Between the time that I started writing this post and when it went live, a new entry appeared in the navigation drawer pointing to the long-awaited Allo for web. The app's portion of the feature is live, but it can't be used without accessing a website that isn't available to the public yet. Note, this menu entry is enabled server-side, but may not be live for everybody yet. It can appear on both v15 and v16.

As previously predicted, the process simply requires starting the in-app QR code reader, visiting the Allo website, and scanning a code to make the connection. You can open the screen that contains the setup steps, but it also instructs you to visit allo.google.com/web, which isn't actually live at this time. We'll probably see it go live tomorrow morning – within the next 12 hours, for those that don't live in roughly the same timezone.

– Thanks to everybody that tipped us!

Thanks to all the tips we've received, we know the Allo for Web client is now live and working. You can check it out at allo.google.com/web. It's also been announced by Amit Fulay and on the Allo Support Forums. There's a fancy GIF to go with that:

Google's incredible speech recognition technology is one of the things that drove Android's success over the years, and continues to grow more important with Google Assistant and products like Google Home. While Allo was the first exposure most of us had to Assistant, it lacked voice activation, which is probably the thing we identified with most. That may be changing soon enough as we can see from a few new error messages added in the latest update that would seem to suggest hotword detection is coming to Allo.

It might not seem like a big deal, but hotword support might make it possible to use Allo completely hands-free. That would be a pretty awesome addition for a chat app. Sending messages while we're cooking or getting ready to go out, things that often require both hands, could be done without picking up a phone to type messages. Maybe I'm being a little optimistic, but this is the type of thing that could seriously improve Allo.

Everybody has a birthday, so let's celebrate it through Allo. A couple of new strings suggest the app will be doing something for the day on which we were born. One of the lines reads "birthday today," which calls to mind the birthday reminders many of us are used to seeing in Facebook. The other line, which wishes a happy birthday, is probably an automatic recommendation for users that want to say it without typing it out.

Locations for work and home

Google Maps has been keeping track of where we live and work for many years and making pretty good use of that information to help us get where we're going quickly and find the things we want nearby. After a while, Google began using that information in other places, like Google Now. Evidently, that information might be making its way into Allo next.

A couple of new lines seem to suggest Allo will encourage users to enter locations for their home and daily commute, which suggests to me that there will also be message suggestions that use this information. For example, you might be getting out of work late and want to send a message to somebody at home with an estimate for when you'll get there.

Allo has earned a reputation for being a bit of a data hog (depending on usage habits). If you don't enjoy eating up your data on a very limited cellular plan or pay-as-you-go pricing, it will be a good idea to get more control over it. Now it looks like Allo is adding a lite mode to cut back on those expensive megabytes.

Right now, it's just a title with little context about how it works, so I'm not sure what the implications will be. Lite mode may do things automatically to reduce the size of media, like downsizing images or reducing the bitrate of audio clips, or it might take the approach of prompting users before even downloading such files, giving them the opportunity to decide when and if they need them.

History has shown that the average number of messages sent each minute explodes during major sporting events. Based on a new line of text in this update, it looks like Allo may be taking a stab at getting more involved in that bustle of activity.

Right now, it's just a single line of formatting for team sports (e.g. Broncos vs Seahawks), so there's not necessarily enough context to jump to any conclusions about how this will be implemented. It's possible Allo may present these as auto-fill suggestions for conversational purposes, or there might be recommendations to talk to your friends about ongoing games. However, I have a theory based on the next set of strings that there might be a bigger plan.

There are also a few new strings related to creating events and adding a reminder. My theory is that Allo may be gearing up to show sports fans a list of upcoming and ongoing games and make it easy to set up group chats and have reminders to get into the chat when the game begins. Alternatively, this could even be used for creating big chatrooms where people that don't already know each other can come together, something Allo hasn't really done before. In either case, this could be a great way to increase engagement from active users, and possibly boost the number of active users by quite a bit.

To be clear, these lines aren't necessarily connected, there is no identifying pattern in the names or format to suggest they are. However, the other explanation for creating events and having reminders is that Allo might add a feature to conveniently add plans to a calendar based on conversations had in Allo. This is a perfectly great idea for a feature that absolutely should exist. (Seriously, this should be on the to-do list if it isn't already.) However, the typical text for event setup is missing, like a title for a date field, description, attendees, etc. This is why I think it's likely that these things are filled in for users by Allo, and the details of sporting events would be the obvious choice at the moment.

You might find Allo making an appearance in the Google Feed soon. Formerly known as Google Now, the Feed is filled with cards containing weather conditions, news recommendations, and upcoming appointments. Now there are a few strings that seem to suggest Allo might begin pointing users to that screen for some reason.

There are three lines specifically mentioning the feed, and another that names the Google Now Launcher, probably so users will know they can download a launcher that offers the feed.

I'm not really sure what type of content Allo would want to put in this spot, but this seems like a worthwhile moment to point out that this could also be a part of the sporting events topic above. After all, it's a good place to put up a list of games and starting times.

If you've used any group chat software in the past, you should be familiar enough with mentions. Put simply, it's a way to call for the attention of somebody in a chatroom if they aren't paying attention. Mentions usually work by typing somebody's name in a message and they'll get a notification of some kind. In the context of Allo, this is probably good if a chat member has muted a conversation and doesn't see new messages. Naming them in the chat would be a way to bring them back in without starting a whole new conversation to tell them to look in the first group chat.

A few other odd lines

The remaining strings mostly stand alone without enough context to analyze fully, or they are simply too basic to warrant much discussion, so I'm going to keep these short.

Evidently, something in Allo will soon allow us to pay for something else. There aren't any clues to indicate if this is going to be a shortcut to personal payment services like Google Wallet or PayPal, or if it will be focused on paying for goods of some kind, like activating features in the app, ordering food for delivery, or covering the cost of a service. Whatever the case, expect to see something about spending money in the future.

There's a toast message for sending audio to an account. Again, no clues if this is something that happens when you're forwarding an audio clip or if it happens when importing or exporting one.

I have no idea on this one. I mean, email is not really Allo's area. Maybe it has to do with account activations...

Weather... It's weather... Do you want to know weather conditions and aren't willing to leave Allo to get them? That's gonna be a thing. I suppose there might be some context-aware value in conversation, like pointing out that a hiking trip might be a bad idea because reports predict rain, but I don't think there's much to be said about a string that shows Allo will be able to show weather.

Anyway, that's it for this one. It's entirely possible any number of these features are staged rollouts and only available for a limited number of users, so keep an eye out for all of these things as you try the latest update.