If you use Google Calendar and have an eye for design you may have noticed that while the Android and iOS versions got material makeovers as early as 2014, the web interface has not been updated to match. A few months ago we got the fantastic news that many of us had long been waiting for. Thanks to a leaked roadmap for G Suite updates, we learned that a redesign for Calendar was penned for the fourth quarter of 2017. We've now been treated to screenshots of the new design in testing, and it doesn't look like it'll disappoint. 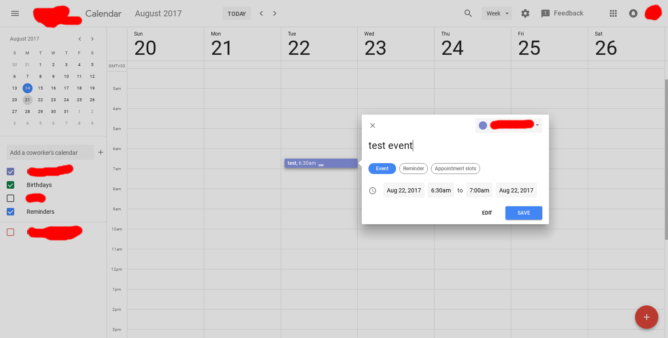 Creating an event in the new Google Calendar.

Such a lack of consistency is common at Google. It's the same story for Gmail, and the reasons for them lagging behind are likely to do with their enterprise use as part of G Suite. Google must be careful about changes that could confuse large numbers of paying customers. That's probably partly why Inbox by Gmail exists, even though that won't have placated personal users clamoring for a Gmail redesign. There are themes and extensions around to help make the current Calendar and Gmail web iterations look a little more material, but they're no substitute for the official makeover we've all been hoping for.

The leaked slide didn't specifically mention that the Calendar redesign was material in nature, but these new screens confirm it. They were posted in r/Google by xDawnut (and later on r/Android), who says it's not rolling out to anyone else just yet. That implies that it's either accessible as part of the Trusted Tester Program or an internal leak, that's pure speculation though. It's unclear from the screens how many new features the update will contain, or if it'll be mostly superficial. As pointed out by jwildman16 in the comments, rich text in event descriptions looks to be new. Even if it was only visual, it would still please a lot of users (me included). As it's slated for release in Q4 of this year, it's quite possible that we're not looking at a final version of this design overhaul, although it does appear to be fairly polished as it is. It looks a lot like the Calendar app, which while not without its flaws still does at least look the part, so that's no bad thing. I'd expect more leaks of this much-anticipated release before we hear anything official later in the year. In the meantime, pore over these screenshots and watch this space.