Netgear's Arlo Pro cameras are popular options for home security because they have wireless connectivity, long battery life, and support for local storage. The recently released Arlo Go takes the wireless aspect to the next level by adding an LTE modem for connectivity almost anyplace. That means you don't need to put the camera near your Arlo Hub or your regular WiFi network. It comes at a price, though.

The Arlo Go does have some compelling use cases, and the performance is similar to other Arlo cams. However, Arlo Go is missing some important features, and it locks you into expensive, limited mobile data plans. The camera itself isn't cheap, either.

Setting up the Arlo Go is easy and offers complete freedom. Do you want to put the Arlo Go on your porch? Fine. Put it in your car? Also fine. On the other side of the country? You can do that too. First, you need to add it to your Arlo account. Simply open the app and tell it you want to add a camera. After choosing Arlo Go, the app tells you to press the sync button on the camera and displays a QR code. Simply point the camera at your screen, and it'll pair. There's no wireless hub to mess with as you have with the Arlo Pro. That speeds things up during setup, but it'll be limiting later on.

Instead of connecting to a hub, the Arlo Go beams video to the cloud directly over its LTE connection. There are several different versions of the Arlo Go (which I'll get into later), but you should be able to get one that connects to LTE in your area. The LTE modem in this camera uses more power than WiFi, so the Go comes with a larger battery than the Arlo Pro (3,660 vs. 2,440mAh). As such, it's a much beefier device. The only other new hardware inside is the SIM card slot and a slot for adding a microSD card. 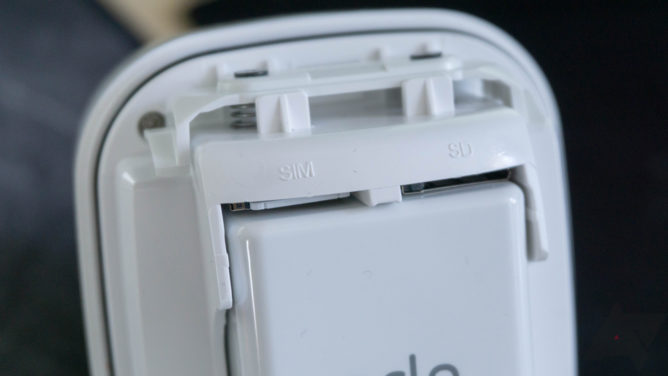 The Arlo Go's plastic shell snaps together to seal in the battery and cards with a design similar to the Arlo Pro. The camera is IP65 rated for water and dust, although mine doesn't seem to close all the way (see below). This is apparently something Netgear is working to correct but insists it's only a cosmetic issue. I had the Arlo Go outside for several weeks, and I can confirm there's no evidence of water infiltration.

The front of the camera has a flat black face with the camera module and IR lights for night vision. Netgear claims 25 feet of night vision, and it's around that for me. My garage in the back yard where I tested the Go is about 20 feet away, and it was clearly illuminated.

The bottom of the device has a rubberized foot so that you can set it on a flat surface. If you want to mount it someplace, it comes with the Arlo outdoor mount, which screws into the bottom. That's a nice bonus; you need to buy the outdoor mount separately for the Arlo Pro. Netgear also makes a number of other accessories for the Go including camouflage skins and a quadpod mount. 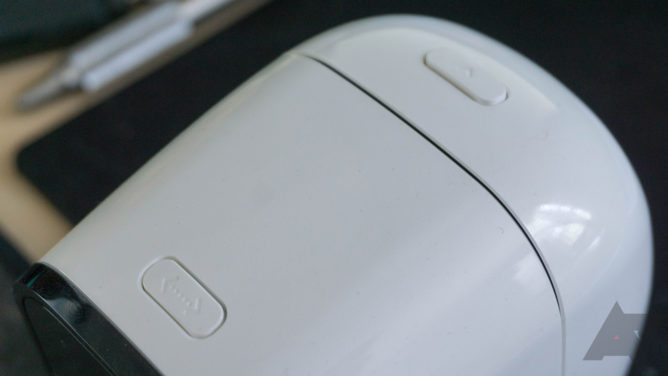 The housing doesn't fit together smoothly, but this seems to be a cosmetic issue only.

This camera is designed to live outdoors, so it's able to function in a wide range of temperatures. At the low end, it can operate as low as -4 degrees Fahrenheit (-20 C). For those in warmer climates, the Arlo Go is fine up to 113 degrees Fahrenheit (45 C). This is the same range as the Arlo Pro, but those cameras are always going to be nearby. The Arlo Go could be in some remote location, so you'd have to go grab it when the temperature gets too extreme. Still, there are not many cameras with better temperature tolerance than this.

Battery life is hard to gauge as I haven't even had the camera long enough to blow through a charge. The Arlo Pro runs 4-5 months on a full battery, but this one will probably be shorter. Arlo expects 1-2 months as LTE uses more power than WiFi. The rate of depletion I've seen so far supports that estimate.

Using a wireless camera means making some sacrifices. Like the Arlo Pro, the Go is limited to 720p video, and the image is a bit compressed. When the camera uploads the videos, they're actually just 640x352 resolution. This is with quality set to maximum, but I can't rule out a bug of some sort. There's a video sample below so you can get a better idea of the quality.

And here's one in the dark.

The video looks alright—it's certainly good enough to see what's going on. The camera has a wide 13-degree field of view, but the edges aren't too distorted. However, zooming in gets you little more than a pixelated mess. Like other Arlo cameras, the Go takes just a little too long to wake up and begin recording. So, you might miss a few seconds of activity. The live delay isn't bad for LTE; maybe three or four seconds. However, it takes upward of eight seconds for the app to load the live feed.

The modest delay is more than you get with wired cameras, and it can make using the 2-way audio features awkward: you speak, it takes a few seconds for the speaker to output, you get a reply, and it takes a few more seconds to reach your phone. It's just not the best experience. That said, the audio quality is solid. The microphones on the camera are sensitive, and the speaker is more than good enough for words to be understood.

Arlo Go plans are more limited than the plans for the WiFi-connected Pro cameras. The plans are based on the amount of video uploaded. The base plan includes 30 triggers per month, each with a 30-second video clip. So, that's 15 minutes of video, for which you pay $4.99 per month per camera. The main issue is that as a wireless camera, the Arlo Go acts like a full-frame motion detector when it's not actively streaming. With no customizable activity zones, any movement in the frame causes the camera to record a video—even a windy day could trigger videos as trees in the frame move around. You can run through 30 triggers in a single afternoon, and the other plans are considerably more expensive.

You're not getting a lot of data for your money with Arlo Go. As I mentioned above (and you can see in the sample), Arlo's video is noticeably compressed. My videos are around 1MB for 10 seconds. Thus, that $5 monthly fee gets you roughly 90MB of LTE data. That's way too expensive—this camera costs over $400, and it could just stop working after a windy afternoon. Even fiddling with the motion sensitivity setting doesn't help. The camera is already a bit slow to wake up and record, so turning down the sensitivity ensures you're going to miss events you'd have wanted to record. The top-end plan has 225 minutes of video per month for $33. I could still see a camera running through this plan in a matter of days. If you want Arlo Smart, which can filter alerts with people, vehicles, and animals, that'll cost another $39 per camera each year. 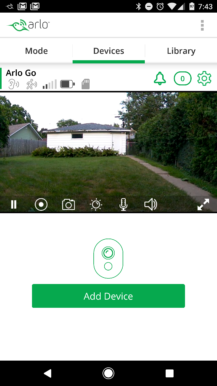 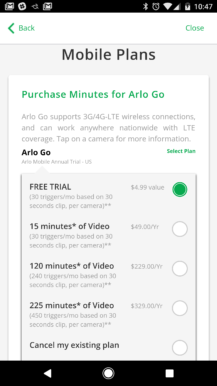 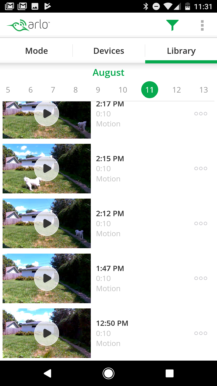 The carrier-compatible versions of this camera seem less restrictive. Here, you can use a carrier plan with a regular data cap. There's no worrying about minutes; it's just a normal data device on your account. If you're under the cap, it'll keep working. You're still paying for LTE every month, though.

Perhaps one saving grace here is the microSD card slot. To be entirely fair, this is not a common feature among competing cameras, which lock you into cloud storage plans. You can set the Arlo Go to save all its video to the card, which is a fine backup when you inevitably run out of monthly triggers. However, you need to go and get the camera to see the videos on the card. With Arlo Pro, the videos are beamed over WiFi to the USB storage device you've plugged into the hub. The Arlo Go has no WiFi, so the card is not terribly convenient.

The Arlo app is also an issue. It hasn't improved since I looked at the Arlo Pro and cited it as a usability problem. The interface is still clunky with confusing menus and random spots of lag. I've also noticed an ongoing issue where the app fails to load after I open it from the overview screen. It just hangs on the login screen even though I'm already logged in. When it already takes 7-8 seconds to load the video feed, additional delays in the app are completely unacceptable.

Arlo has support for both push notifications and email. The latter is not supported by all cameras, so it's nice to see here. You get a screenshot of the camera feed in the email as well. Although, setting up notifications and camera modes is not intuitive, and location-based switching is unreliable.

This is not a bad camera, and in some ways, it's very neat. However, you are making several sacrifices to get an LTE-connected camera. Arlo Go's video quality leaves something to be desired, even on the highest setting. I can forgive a little here since it's sending data over LTE, but the video still is not clear enough to make out faces at a distance.

There is a use case for the Arlo Go, but it's a narrow one. If you need to keep an eye on an outdoor space that's away from a WiFi network, this camera is exactly what you want. I could imagine those who need a trail camera jumping on the Arlo Go and happily paying the monthly fees. However, I seriously question how many regular users will want to commit to these plans. You can run through the 30 trial triggers in a day, so I'm not sure even the higher plans will work reliably all month long. If you want Arlo's smart features, that'll cost you even more. 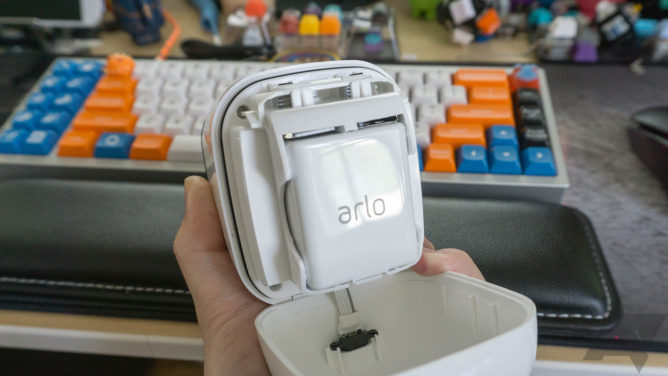 The price for the hardware is very high. The Arlo Go will run you $429.99 when purchased on Amazon or another retailer. Verizon has its version for $349.99 with a 2-year service agreement. If all this sounds reasonable, you probably already knew you wanted the Arlo Go. For everyone else, you can probably make do with Arlo Pro or another WiFi-connected security camera.

Facebook Marketplace, an exchange for local goods, is now rolling out to 17 countries in Europe