Lenovo is one of the worst Android manufacturers when it comes to updates. Motorola devices went from extremely quick updates under Google's ownership to mostly-bad support under Lenovo. The company updated its software upgrade page today, which now states that the entire existing Phab product lineup (as well as two tablets) will not receive further software updates. 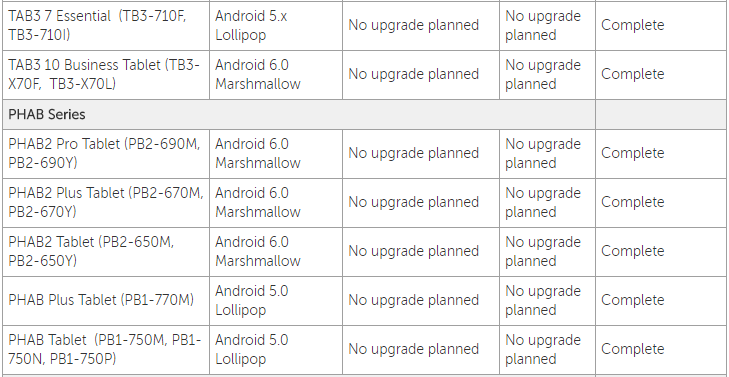 The affected devices include the original 2015 Phab, the Phab Plus, Phab2, Phab2 Plus, and Phab2 Pro. The original Phab and Phab Plus shipped with Android 5.0, but the rest are on 6.0. Lenovo also says the Tab3 7 Essential will stay on Lollipop, and the Tab3 10 Business will stay on Marshmallow (both tablets were released last year).

The exclusion of the Phab2 Pro from further updates is especially ridiculous, considering it was released less than a year ago and was the first widely-available phone with Project Tango AR. If you read our review, you'll know it wasn't a very good phone, but there's no excuse to drop support for a $500 device this soon. Not cool, Lenovo.