Anyone who's been following technology news for long enough will remember Microsoft's infamous browser ballot screen in Europe, which was a result of antitrust action against the company for pushing Internet Explorer. Google is facing a lot of regulatory pressures in Russia right now, so it's doing something similar. When opening Chrome for Android in Russia, users are being asked to choose a default search engine.

The change comes in Chrome v60, which was recently rolled out to the stable channel. Users who open Chrome v60 on Android for the first time are offered three search engine options: Google, Yandex, and Mail.ru. The choice applies to Chrome itself, but also to the Chrome search widget. You might think Google is the natural choice, but Yandex is extremely popular in Russia. Yandex is behind the complaint to regulators that kicked this investigation off. 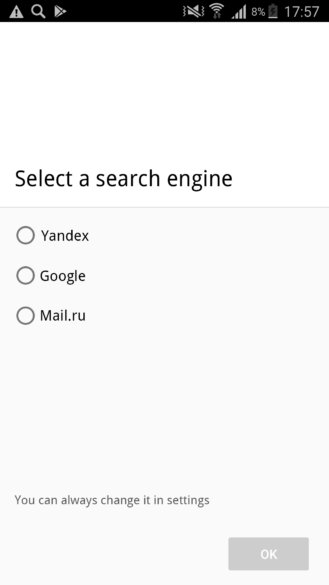 Google was also slapped with a few million in fines last year when the Russian Federation Antimonopoly Service (FAS) sided with Yandex. However, the search engine ballot will clearly be a bigger blow to Google's bottom line. Many users who see this popup will choose Yandex, and many of them would never have ventured into the settings to manually change away from Google before.