In its quest to bring all of the things into the core application, Facebook has decided to sunset the Groups app on September 1. If you're not deep in the FB world, then you might be forgiven for forgetting that this even existed — I sure did.

The explanation for this is that the company is hoping to improve the Groups functionality in the main app, which would make a separate Groups application quite superfluous. Facebook is also assuring users that nothing will happen to their groups, they're just moving. 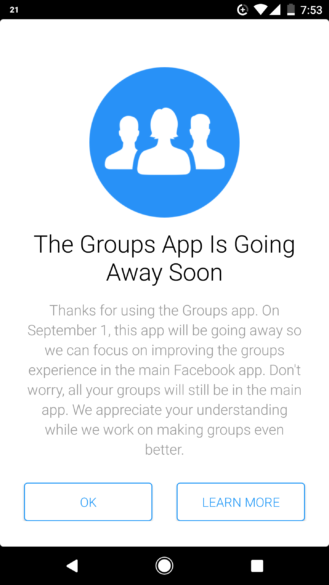 On the one hand, I think that it's great that Facebook is condensing its core experience. However, on the other, the main app is already bloated enough with stuff, so who knows how migrating Groups into it will affect performance and such. We'll just have to see, but I don't think that sunsetting a buggy mess with poor UX is a bad thing.

Speed controls are finally being tested in YouTube's Android app