Belkin is one of the most established mobile tech accessory companies out there, but that doesn't mean it's not privy to making mistakes. About seven months back, charger wizards Nathan K and Benson Leung, along with XDA forums member mtucker, discovered a fault with Belkin's $44.99 F7U004 27W USB-PD car charger. Unfortunately, it's taken until now for Belkin to release a revised model, and the process to get one seems rather interesting.

The issue with the original charger (model F7U004) was that it would for some reason act as a device, which would then drain the connected device's battery and actually feed current back into your car's 12V ports. In response to this, Belkin offered customers two courses of action; either exchange the charger for this 15W car charger (model F7U006) with a hardwired USB-C cable and USB port (MSRP $34.99) and get a $10 refund, or wait until Spring 2017 to exchange the faulty unit for a revised model. 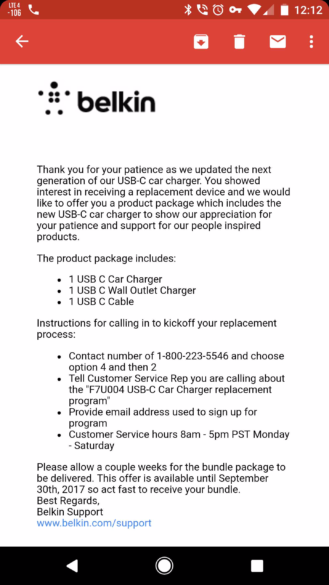 As you might be able to tell, it's now far past Spring 2017. To those customers who chose to wait for a replacement, Belkin has just sent out an email that the updated version (model F7U018) is now available. The replacement bundle will actually also include a USB Type-C wall charger, which the original package didn't include, as a gesture of goodwill. Customers will be able to get this exchange until September 30th, 2017, which should be more than enough time. To do so, they must simply call the number in the screenshot above and follow those instructions. The replacement should arrive in mailboxes in around 3-7 business days.

Interestingly, though, at least one customer received this email a few hours after getting off the phone with customer service (the bolding was done by us):

"This email is to confirm your recent request for a warranty replacement of your Belkin cable. In order to proceed with the replacement, please respond to this email with a photo of your Belkin cable cut in half. Once we receive your confirmation photo we will have a new product shipped out to you within 1-2 business days. Delivery times vary between 2-5 business days.

You are not required to send your old cable back to us. After sending the photo please feel free to dispose of the cable how you see fit."

Quite honestly, if this is indeed protocol, this is a pretty crappy move by Belkin. This would at least make sense from a safety standpoint if the cable was hardwired to the car charger, but since the USB-C cable is removable from the original unit, there's zero point in mandating this aside from trying to keep customers from getting a "free" cable. This seems especially strange considering Belkin is throwing in a free wall charger, and that the company's kept its customers waiting for over half a year. That being said, two other people claimed they hadn't received this email, so perhaps the folks at Belkin realized the error in their ways and ditched this useless requirement.

Let us know if you're going through this process below, and if you've received a request to cut your perfectly functional USB-C cable in two. We're genuinely interested as to whether the request is still being sent out.

Lenovo will abandon its Vibe Pure UI in favor of stock Android on all future phones, starting ...