It's no secret that the tablet market has been shrinking for several years now. The IDC has been tracking data like this for quite some time now, and is reporting that this trend hasn't changed for quarter 2 of 2017. That being said, sales increases from companies such as Amazon, Apple, and Huawei have slowed this decline to 3.4%, or 37.9 million worldwide shipments. That's noticeably better than the 8.5% decline we saw for 1Q17.

The five companies with the most tablet shipments for 2Q17 were Apple, Samsung, Huawei, Amazon, and Lenovo. (Yes, we know the site is called Android Police, but it's important to mention Apple when it comes to tablets.) The Cupertino-based company increased sales by 1.4 million (10.0 to 11.4 million), which made for an increase from 25.4% market share in 2Q16 to 30.1% in 2Q17. This increase can be attributed to the new $329 iPad, as well as the updated 10.5" iPad Pro. Samsung's sales numbers for tablets didn't change much, but market share increased from 15.4% in 2Q16 to 15.8%.

Huawei and Amazon, on the other hand, did quite well; Huawei increased shipments from 2.1 million this time last year to 3.0 million, making for a market share increase of 5.3% to 8%. The Chinese company's cheap and cellular-enabled offerings allowed it to climb here. Similarly, Amazon increased shipments from 1.6 million to 2.4 million, increasing its market share from 4.1% to 6.4%. Both of these companies saw year-over-year growth figures of around 50%, which is pretty impressive. Amazon's ultra-cheap Fire line of tablets, including its kid-friendly options, propelled it to here. 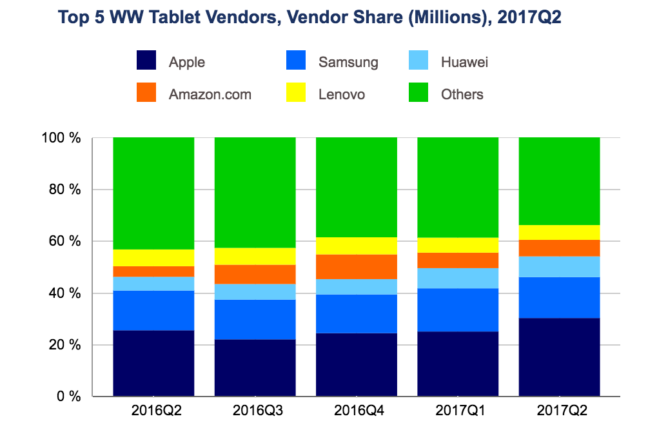 Lastly, Lenovo's market share went down from 6.5% in 2Q16 to 5.7% in 2Q17, with sales declining from 2.5 million shipments to 2.2 million. These five manufacturers, combined with the rest of the tablet market, made for a decrease in shipments from 39.3 million this time last year to 37.9 million, or a 3.4% year-over-year loss.

The IDC expects this slowing decline to continue throughout the rest of the year. The new Microsoft and Apple product launches usually lead to inflated shipments in subsequent quarters, Windows' reintroduction to the ARM platform could help the middle of the market, and new ChromeOS devices should lead to a better market. Overall, it looks like the tablet market may be steadying itself, even if there is still a year-over-year decline.

FRAMINGHAM, Mass.--(BUSINESS WIRE)--The downward spiral of the tablet market continued during the second quarter of 2017 (2Q17), according to preliminary data from the International Data Corporation (IDC) Worldwide Quarterly Tablet Tracker. Despite notable product launches like the new lower priced iPad and products from other top-tier vendors, worldwide shipments for tablets declined 3.4% year over year in 2Q17, reaching 37.9 million.

Once touted as the savior of the market, detachable tablets also declined in the second quarter as consumers waited in anticipation of product refreshes from high-profile vendors like Apple and Microsoft. However, with new product launches towards the end of the second quarter, the detachable market is expected to maintain a stronger position in the second half of the year.

"There's been a resetting of expectations for detachables as competing convertible notebooks offered a convincing and familiar computing experience for many," said Jitesh Ubrani, senior research analyst with IDC's Worldwide Quarterly Mobile Device Trackers. "To date, the 2-in-1 market was bifurcated as Apple and Microsoft led with detachables while the PC vendors led with convertibles. Though that is slowly changing as smartphone vendors and traditional PC vendors begin to offer compelling alternatives, the pace has been rather slow as Surface and iPad Pro still dominate shelf space and mindshare."

Market turmoil aside, three of the top five vendors managed to increase share and grow on an annual basis with price being the largest driving factor. However, these gains may be temporary as the replacement cycle of tablets is still long (closer to traditional PCs rather than smartphones) and first-time buyers have become a rare commodity. With downward pressure on pricing from big name brands, "whitebox" tablet vendors and smaller brands are starting to turn their attention away from tablets and IDC expects this trend to continue.

"The tablet market has essentially become a race to see if the burgeoning detachables category can grow fast enough to offset the long-term erosion of the slate market," said Linn Huang, research director, Devices & Displays at IDC. "From that lens, the second quarter was a slight righting of the ship and there is still much to be hopeful about in the back half of 2017. New product launches from Microsoft and Apple are generally accompanied by subsequent quarters of inflated shipments, the reintroduction of Windows to the ARM platform could help remedy the aforementioned hollowing of the middle of the market, and we expect a proliferation of Chrome OS-based detachables in time for the holidays."

Apple positioned itself quite well during the quarter by consolidating its lineup and introducing two new iPads. The new iPad's relatively low price point triggered some consumers to upgrade their aging devices and demand for this new tablet finally caused a turnaround for Apple's iPad business. Meanwhile Apple's transition towards detachable tablets continued with the launch of the 10.5" iPad Pro and a major update to iOS (expected later this year).

Samsung was able to gain share simply by sustaining flat growth in this declining market. The company appears to be the third major contender in detachables, after Apple and Microsoft, and in typical Samsung fashion offers multiple detachable tablets with a choice of either Windows or Android. On a worldwide basis, Samsung's slates have a significant presence though, like many other vendors, this portion of the business continues to struggle.

Huawei's investment in brand marketing in Europe and Asia has continued to work well as the company finds itself among the top 5 for tablets as well as smartphones. With plenty of low-cost and cellular-enabled options, Huawei has been able to slowly steal share from rivals like Lenovo. However, the company has been fairly cautious of the detachable market and recent products have had very limited launches.

Amazon.com's aggressive pricing strategy has worked well due to its ever-growing ecosystem. Amazon also managed to update its lineup, offering new tablets at a better price and expanding its Alexa service to the UK. Amazon is also the only major vendor that actively targets the kids' tablet market by offering a dedicated bundle inclusive of kid-friendly content – an approach that seems to have paid off as the company has managed to maintain a stronghold in the tablet market.

Despite the annual decline, Lenovo has managed to slowly increase the share of detachable tablets within its product portfolio, which tend to have a higher average selling prices (ASPs). A low-cost strategy focused on Asia has worked so far, but that strategy is starting to lose its legs.

In addition to the table above, an interactive graphic showing worldwide market share for the top 5 tablet companies over the previous five quarters is available here. The chart is intended for public use in online news articles and social media. Instructions on how to embed this graphic can be found by viewing this press release on IDC.com.

About IDC Trackers
IDC Tracker products provide accurate and timely market size, company share, and forecasts for hundreds of technology markets from more than 100 countries around the globe. Using proprietary tools and research processes, IDC's Trackers are updated on a semiannual, quarterly, and monthly basis. Tracker results are delivered to clients in user-friendly excel deliverables and on-line query tools.

International Data Corporation (IDC) is the premier global provider of market intelligence, advisory services, and events for the information technology, telecommunications, and consumer technology markets. With more than 1,100 analysts worldwide, IDC offers global, regional, and local expertise on technology and industry opportunities and trends in over 110 countries. IDC's analysis and insight helps IT professionals, business executives, and the investment community to make fact-based technology decisions and to achieve their key business objectives. Founded in 1964, IDC is a wholly-owned subsidiary of International Data Group (IDG), the world's leading media, data and marketing services company that activates and engages the most influential technology buyers. To learn more about IDC, please visit www.idc.com. Follow IDC on Twitter at @IDC and LinkedIn.

All product and company names may be trademarks or registered trademarks of their respective holders.