Sales figures for the second quarter of the year are in and it would be fair to say the smartphone industry is in rude health. According to research from Strategy Analytics, global shipments saw solid growth, up 6% year-on-year to 360.4 million. While Samsung and Apple predictably held on to first and second spots in the manufacturer rankings, Chinese challengers Xiaomi, Huawei, and Oppo recorded significant gains as they worked to close the gap.

All of the top 5 strengthened their shipment volumes, but Xiaomi an Oppo posted the most impressive figures. Xiaomi, on the back of strong sales in India where it has been successfully battling Lenovo and Micromax, had a 58% annual increase in units sold that propelled it back into the top five for the first time in a year – its total marketshare is up to 6.4%. Oppo had an even bigger quarter, with a 64% rise in year-on-year shipments and a substantial increase in marketshare to 8.2%. 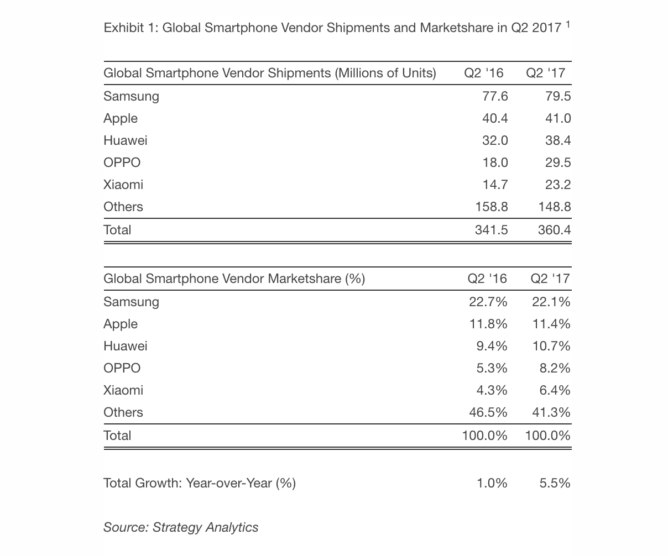 In the battle for 2nd place, Huawei moved to within 0.7 percentage points of Apple. The Chinese company was at just 9.4% marketshare a year ago, but improved that to 10.7% with 38.4 million shipments in Q2 2017. Huawei can attribute its success to good performance in Asia, Europe, and Africa. That considerable progress is even more notable in contrast to Apple, whose sales volume rose by a just 1% and its marketshare actually dropped by 0.4%. The iPhone is becoming less and less fashionable in China, and the Cupertino company will be hoping that the much anticipated iPhone 8 can change its fortunes as it looks to stave off competition from Huawei and the other Android phone manufacturers.

While it may have been expected to suffer greatly after the total recall of the combustible Galaxy Note7 series, Samsung bounced back with a 2% increase in shipments, up to 79.5 million units. It did lose 0.6% marketshare, but at 22.1% it's so far ahead of the pack that it shouldn't cause too much consternation in the ranks of the South Korean company. The imminent release of the Galaxy Note8, coupled with robust sales of the Galaxy S8/S8+, should see Samsung's recovery continue in earnest in the third quarter of 2017.

Linda Sui, Director at Strategy Analytics, said, “Global smartphone shipments grew a solid 6 percent annually from 341.5 million units in Q2 2016 to 360.4 million in Q2 2017. The global smartphone market has settled into a steady rhythm of single-digit growth this year, driven by first-time buyers across emerging markets like Africa and upgrades to flagship Android models in developed regions such as Western Europe.”

Neil Mawston, Executive Director at Strategy Analytics, added, “Samsung shipped 79.5 million smartphones worldwide in Q2 2017, rising 2 percent annually from 77.6 million units in Q2 2016. Samsung continued its recovery from last year’s Galaxy Note 7 battery fiasco, lifted by robust demand for the new Galaxy S8 portfolio with an innovative bezel-less design. We expect the rumored Galaxy Note 8 upgrade with a bigger screen to further strengthen Samsung in the coming weeks. Apple grew 1 percent annually and shipped 41.0 million smartphones for 11 percent marketshare worldwide in Q2 2017, down slightly from 12 percent a year ago. Apple’s iPhone has gone out of fashion in China and this is placing a cap on its worldwide performance. Attention will now turn to Apple’s rumored iPhone 8 introduction later this year and whether its tenth-anniversary flagship model will be different or exciting enough to ignite a rebound in iPhone volumes for the important Q4 2017 Western holiday season.”

Woody Oh, Director at Strategy Analytics, added, “Huawei maintained third position with a record 11 percent global smartphone marketshare in Q2 2017, up from 9 percent a year ago. Huawei is now closing in fast on Apple and Apple will be looking nervously over its shoulder in the next few quarters. Huawei is outperforming across Asia, Europe and Africa with popular Android models such as the P10 and Mate 9.”

Linda Sui, Director at Strategy Analytics, added, “OPPO shipped a healthy 29.5 million smartphones and maintained fourth position with a record 8 percent global marketshare in Q2 2017. OPPO grew an impressive 64 percent annually in the quarter, taking share from major rivals like ZTE, LG and TCL-Alcatel across China, India and Europe. Xiaomi soared 58 percent annually and recaptured fifth place for the first time in a year, taking a record 6 percent global smartphone marketshare in Q2 2017, leaping from 4 percent in Q2 2016. Xiaomi’s range of Android models, such as the Redmi 4A, is proving wildly popular in India, snatching volumes from competitors such as Lenovo and Micromax. Xiaomi has bounced back since ex-Google exec, Hugo Barra, quit the company earlier this year and Xiaomi will be hoping the current momentum can be sustained into the second half of 2017.”

The full report, Global Smartphone Shipments Hit 360 Million in Q2 2017, is published by the Strategy Analytics Wireless Smartphone Strategies (WSS) service, details of which can be found here: http://tinyurl.com/y8fd7djk.

About Strategy Analytics:
Strategy Analytics is a global, independent research and consulting firm. The company is headquartered in Boston, USA, with offices in the UK, France, Germany, Japan, South Korea, Taiwan, India and China. Visit www.strategyanalytics.com for more information.

[Update: Now available in the Play Store] Game Live from Samsung will live stream your screen ...