It took nearly a year, but WhatsApp has just added launcher app shortcuts on Android Nougat (or Marshmallow if you use a compatible launcher like Nova and Action). Thing is, the functions that WhatsApp decided to elevate to shortcut status are... kind of useless.

You get a shortcut to launch the Camera, because WhatsApp is all about the new Status feature even though out of my 500+ contacts, I only see 12 new status shares every day. You also get a shortcut to launch a new chat, because apparently you're more likely to talk to new people than to those you already have active conversations with (well, unless you delete all your chats every day like a maniac... I know people who do that).

And you get three "starred" conversations that make no sense whatsoever. In the screenshot below, the 3 contacts you see aren't my pinned chats, nor my most recent chats, nor people I talk to as often as at least 30 or 40 others in my WhatsApp. The "good" thing though is that like all launcher shortcuts, these can be dragged to become independent shortcuts on your homscreen. 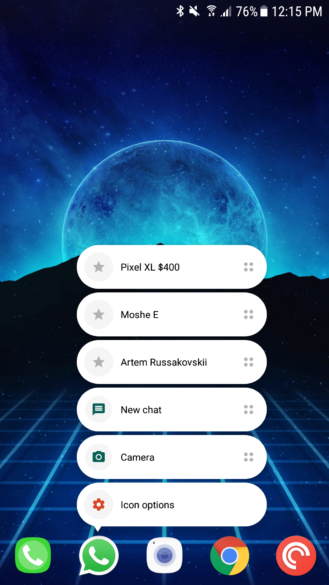 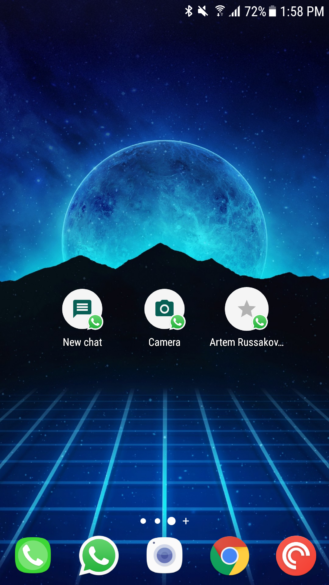 WhatsApp's new launcher shortcuts (left) that can be dragged into individual shortcuts (right).

Beside the fact that most of these shortcuts aren't really useful, WhatsApp already offers native widgets and shortcuts for your homescreen, so you already had a Camera shortcut and a Chat shortcut that let you choose specifically the contact(s) you wanted to assign to it and showed their display picture instead of a boring star. Maybe people aren't using or checking widgets a lot lately so pushing the duplicate functions makes sense to surface the option for them. But still, WhatsApp could at least offer display pics instead of generic stars for its chat launcher shortcuts. 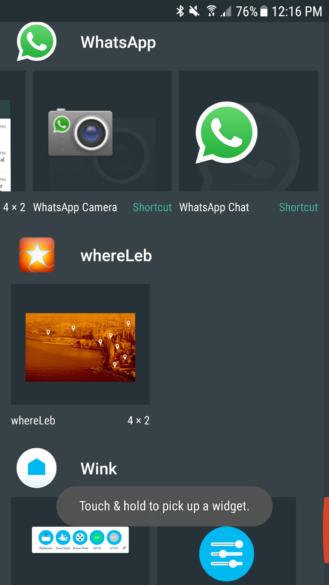 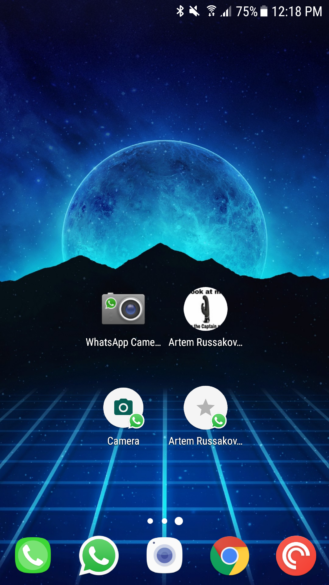 Side note: honestly, if you're using something like Nova, I recommend you use the swipe up gesture on the WhatsApp icon to launch the chat with your most frequently contacted person (assign it to a WhatsApp Chat shortcut). It's less cluttered than a separate icon and it's so much easier to use. 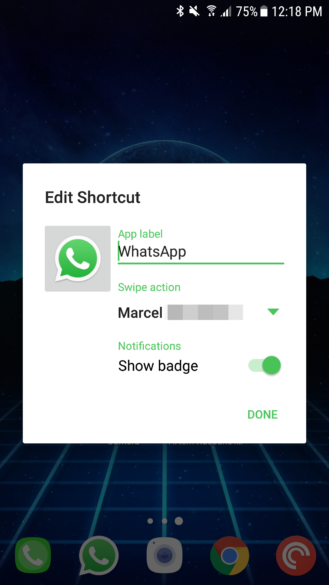 Swiping up on the WhatsApp icon in Nova lets me talk to the hubby.

I should remind myself and you, though, that this is still a beta and one of the first iterations of the feature. Maybe the plan is to have your pinned chats instead of these random ones — that'd be much better. Maybe the profile images will be shown instead of the generic stars. And maybe WhatsApp will see reason and instead give us shortcuts to change our regular display picture and text status (which everyone I know still uses more than the new Snapchat-like thing they added) or to open the list of starred messages we have. That'd be useful.

Launcher shortcuts are live in the latest beta 2.17.277 (they might have been added a couple of versions earlier though, I can't be sure). To get that you either need to be part of the official Play Store beta and get the app there or grab it manually from APK Mirror.

Like we speculated, after a couple of updates to the beta app, the launcher shortcuts on WhatsApp have improved compared to their first iteration a few days ago. The New Chat shortcut is gone, the Camera one remains, and now the 3 shortcuts to chats are actually relevant (we think they're your most recent chats, but there might be a more complicated algorithm at play) and show the display images of the person or group. If you break one of these into its own homescreen shortcut icon, it won't change when your most recent chats change. You can grab the latest beta on APK Mirror if you want to check it out. (For some reason, Artem can see all these shortcuts on his Pixel but I only see the Camera shortcut on my S7 Edge with Nova Launcher, so your mileage may vary.) 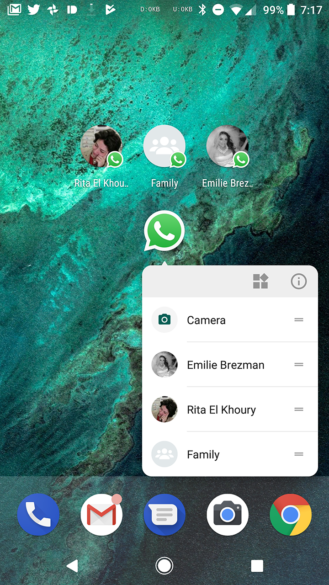