Every six months, OpenSignal releases a report on the state of mobile networks in the US, with six total awards. In February 2017's report, T-Mobile and Verizon each won four awards (there were two ties). For August 2017, though, T-Mobile managed to take all six awards, which is something that has never been done before.

Those six awards can be seen in the chart above. T-Mobile was determined to be the winner through over 5 million measurements and about 173,000 test devices from March 31st to June 29th, 2017. Highlights included Verizon and AT&T speeds slowing after their reintroductions of unlimited data plans, T-Mobile and Sprint speeds increasing, T-Mobile beating out Verizon in terms of LTE availability, and Verizon and T-Mobile being engaged in a heated battle for 4G dominance in cities. In particular, T-Mobile took major leads in 4G download speed, 3G download speed, and 3G latency.

For regional performance, Verizon was very close to T-Mobile, but the magenta carrier still ended up taking the cake overall. This was likely due to Verizon's speeds falling as a result of re-adding unlimited plans, which reduced overall speeds from 16.9Mbps in February 2017 to 14.9Mbps this time around. AT&T, which also reintroduced unlimited plans, also saw its speeds drop (13.9Mbps to 12.9Mbps), but not as significantly. Because Sprint and T-Mobile already had unlimited plans, there wasn't a negative impact; in fact, both carriers increased their speeds (Sprint from 9Mbps to 9.8Mbps, and T-Mo from 16.7Mbps to 17.5Mbps). 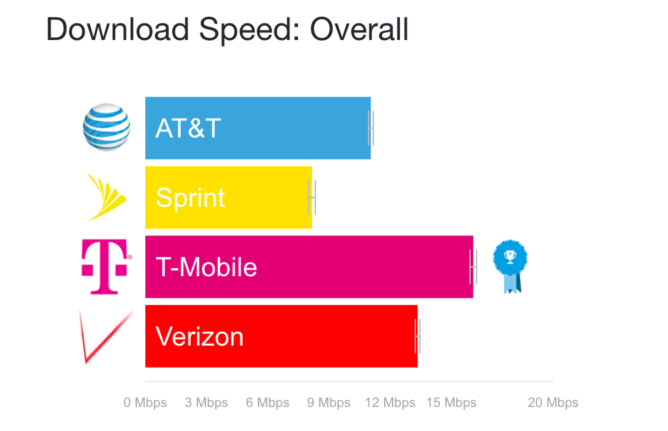 T-Mobile became the first US carrier to hit over 90% availability for 4G, allowing it to beat out Verizon in this regard. This test measures how often a user can connect to LTE; while T-Mobile users could get an LTE signal 90.9% of the time, Verizon users were a bit off at 89.8%. As OpenSignal noted, this isn't a measure of coverage, but rather of how often LTE can be connected to.

All things considered, T-Mobile's complete sweep of the competition is definitely impressive. After all, this is the first time this has ever been accomplished for any mobile network in the world. We look forward to seeing how the competition rebounds in February 2018.

Bellevue, Washington — August 2, 2017 — Wireless customers have spoken, and America has a new No.1 network. T-Mobile (NASDAQ: TMUS) today announced its network has scored a clean sweep in the latest State of Mobile Networks report from OpenSignal, placing no.1 in every category. It is the first such sweep for any major wireless provider anywhere in the world. In the report, more than five billion tests from actual wireless customers in the second quarter show that T-Mobile’s network is not only fastest, but also most responsive, and T-Mobile customers get an LTE signal more often than customers of any other major wireless company do.

The OpenSignal report also confirmed that, since February, when Verizon and AT&T began widely offering unlimited data plans, the carriers’ customers have continued to see a steady drop in network speeds, declining steadily every month. In a separate blog post measuring peak network speeds for the same timeframe, OpenSignal found that T-Mobile customers experienced speeds closer to the top more often than Verizon customers on an everyday basis.

“Better matters. But BEST sure as hell matters more,” said John Legere, president and CEO of T-Mobile. “I’ve always said, ‘Shut up and listen to your customers.’ Well, now, customers across all US wireless providers have spoken—through billions of their network experiences—and they’ve told us loud and clear that America’s Un-carrier has built America’s BEST unlimited network.”

In addition to the OpenSignal results, T-Mobile’s LTE network was also fastest for the 14th quarter in a row according to Ookla Speedtest.net data, which is based on millions of actual customer experiences.

“It’s a clean sweep for the Un-carrier!” said Neville Ray, Chief Technology Officer for T-Mobile. “For the past several years, T-Mobile customers have been riding on America’s fastest LTE network. But that wasn’t good enough for us. Now T-Mobile’s network is the fastest, the most responsive and has the most reliable LTE signal in the nation. That’s what I’m talkin’ about!”

Rather than basing results on the simulations used in older network testing methods, with scripted drive routes on only one phone model, OpenSignal gathers data directly from actual wireless customers who have downloaded the app onto their smartphones. Performance measurements are taken wherever customers happen to be, at home, at work, or on the go – indoors and out – resulting in a true representation of customers’ wireless data experience.

Since 2015, T-Mobile has doubled its LTE coverage and now covers 315 million people. By the end of the year, the Un-carrier expects to expand LTE coverage to 321 million people. With its rollout of 700 MHz Extended Range LTE nearly complete, T-Mobile plans to further broaden its LTE footprint for customers this year with its newly acquired 600 MHz spectrum.

Source: OpenSignal Reporting U.S.A. (August 2017). © OpenSignal. All intellectual property rights, data, content, graphs & analysis in report is owned by OpenSignal. Reports produced by OpenSignal may not be quoted, reproduced, distributed, or published without prior written consent. Fastest for 14 quarters based on T-Mobile analysis of national LTE results from Ookla® Speetest data. Video typically streams at 480p; on all T-Mobile plans, if the network becomes intermittently congested, top 3% of data users (>32 GB/mo.) may notice reduced speeds due to prioritization.

About T-Mobile US, Inc.
As America's Un-carrier, T-Mobile US, Inc. (NASDAQ: TMUS) is redefining the way consumers and businesses buy wireless services through leading product and service innovation. Our advanced nationwide 4G LTE network delivers outstanding wireless experiences to 69.6 million customers who are unwilling to compromise on quality and value. Based in Bellevue, Washington, T-Mobile US provides services through its subsidiaries and operates its flagship brands, T-Mobile and MetroPCS. For more information, please visit http://www.t-mobile.com.

ASUS ZenFone AR is now available from Verizon for $648