Motorola is set to launch the Moto Z2 Force in a few weeks on all major US carriers. Those carriers are doing their part to make the launch a success with various promos, but you ought to look upon these deals with skepticism. Our full Moto Z2 Force review will be ready in a few days, but I thought it would be prudent to expand on something I touched on in the hands-on: the ShatterShield display. I'm afraid this screen will be a deal breaker for many people. While it doesn't crack, there are plenty of other issues with it.

The key to Motorola's unbreakable displays is that they are composed of plastic instead of glass. This was the case last year with the original Z Force, but the new phone doesn't seem to use the same materials in the screen. I've only had this phone for about a week, but there are already several visible scratches on the display. David has also picked up some deep gouges in his screen.

Now, you would expect a few scratches on a screen made of plastic—it's more resistant to impact but much softer than glass. However, the plastic Moto used this year is obviously softer than what it employed in 2016. My Moto Z Force review unit has been clunking around in a drawer with other phones for most of the last year, and it's barely scratched at all. That's in addition to being actively used for a few weeks last year. After less than a week, the Z2 Force is already more scratched. The scratches aren't always visible when the screen is on, but when the light hits at the right angle, you'll see them. 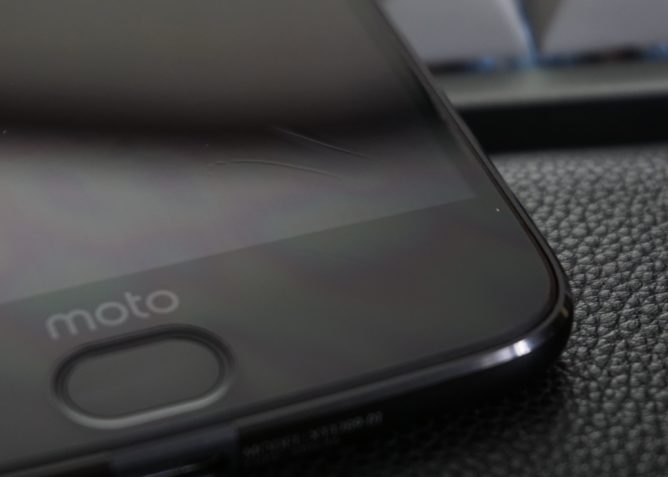 I'm not even sure how most of these scratches happened. The phone has been in my pocket or on my desk the whole time. Well, I guess I do know how one of them happened. You see, when I first noticed the scratches, I did what I would do with any phone—I ran my fingernail across the area to see if it felt like a scratch or just some gunk that would come off. I confirmed they were, in fact, scratches, but also accidentally added a new scratch with my fingernail. This should not happen ever, but especially not on a phone that costs $800.

Since I have the previous Z Force handy, I was able to compare the screens directly. On the Z2 Force, a fingernail is enough to scratch the display. This is not true of last year's Z Force. I can't think of any reason Motorola would downgrade the materials, but that's what it did.

From what we understand, Motorola changed the design of the ShatterShield screen this year to make it thinner. Part of that process included bonding the plastic cover to the display. Thus, you can't remove it like you could on the Z Force. So, if it gets massively scratched up, you would need to replace the entire AMOLED panel instead of just a plastic sheet.

The adhesive holding the plastic layer in place seems insufficient, too. Of the two units we've tested, both make a "crinkling" noise when you press in certain places. The plastic appears to be popping up slightly after being pressed down, like the adhesive isn't strong enough to hold it. The sound is very noticeable around the fingerprint sensor and at the top near the earpiece.

I've also noticed the front-facing flash is slightly recessed from the rest of the bezel. The plastic cover is so soft and flexible that you can press on the flash and actually feel the plastic sink in. It'll stay concave like that for a moment, and then the adhesive fails and the plastic springs back up with a loud click.

I should note, this phone is from the first round of manufacturing. It's possible Motorola will improve the final retail hardware. Maybe the adhesive will hold the plastic cover more firmly to eliminate the clicking sounds? That would be nice. Although, I doubt the plastic material itself will change, so get ready for scratch city.

The question potential buyers have to ask is, "Is an uncrackable screen worth these trade-offs?" having lived with the Moto Z2 Force for a few days, I already find the ShatterShield display extremely annoying. Either the scratching or clicking sound would be enough to put me off this device, but perhaps you're a real butterfingers who's always breaking phones. Still, this seems like the sort of compromise you should not need to make with an $800 phone.

Motorola has reached out with a statement on the issues we are seeing.

Shatterproof does not mean scratchproof, and scratches can be subjective. Motorola encourages the use of a third-party screen protector for added scratch resistance. Over the three generations of ShatterShield, we’ve continued to evolve the design. This year, we’ve switched to a 3D design which makes it more competitive with other flagships, and we have test results that show it is just as durable as last year’s version. That being said, we will continue to evolve the design for continuous improvement. The unit you received was one of the very first production units and we do have an improvement in the works that consumers will see shortly after launch.

Consumers can get the top liner replaced by contacting the service center at their carrier or Best Buy.

We've asked for more information about what's entailed in replacing the top layer, and what sort of test data Motorola has.