Samsung's upcoming Galaxy S8 Active hasn't been announced yet, but we already know almost everything about it. This latest entrant to Samsung's Active line of rugged smartphones will reportedly pack most of the standard Galaxy S8's specifications into a rugged, industrial-looking body. Now, famed leakster Evan Blass (@evleaks) has released an official render of the S8 Active.

The picture doesn't show us too much that we didn't already know, but we can glean a few small details. The phone will have a protruding bezel to better protect the display. It'll also have metal bumpers on all four corners that appear to have Torx screws. It's entirely possible that this is an indication that the bumpers will be replaceable, but then again, this could be entirely cosmetic. But if those bumpers are indeed removable, this could open up a whole new market for accessories, whether they be for form or function. This would be a pretty cool way to differentiate the S8 Active from its glass sandwiches of brothers. 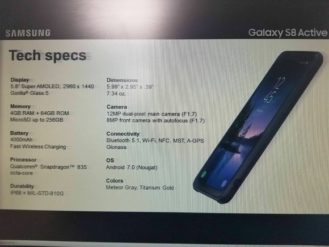 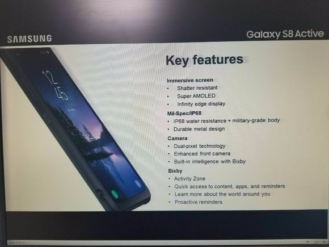 As for specs, the Galaxy S8 Active (likely an AT&T exclusive) will sport a flat, "shatter-resistant" 5.8" 1440p display with an 18.5:9 aspect ratio topped by Gorilla Glass 5, a Snapdragon 835, 4GB of RAM, 64GB of storage with microSD expansion, a 12MP main camera, an 8MP selfie shooter, and a 4000mAh battery. It will also feature an MIL-STD-810G rating, IP68 water and dust resistance, fast wireless charging, and an iris scanner. Oh, and Bixby will be on board with its own dedicated button. The phone will be available in Meteor Gray and Titanium Gold.

Some sites are quoting an August 1st release date based on an Amazon listing for a screen protector, but that's obviously not a very reliable source. Whether or not that becomes true, we know for sure that we'll be seeing the phone soon. After all, the render does have a date of July 21st on the screen, indicating a potential release date that was delayed.

Urbanears Stadion review: This is not how to do Bluetooth earphones