As far as headphones go, LG's TONE Bluetooth headsets look pretty strange. They don't really follow the standard in-ear or over-ear design, instead opting for a battery base that sits around your neck. However, they're still surprisingly popular; I see people wearing these a lot more often than I'd expect. LG's done something right here.

The new LG TONE Studio (HBS-W120) puts a spin on the TONE line by introducing a second method to listen: speakers. That's right - within this base are four speakers that aim to create a "personal sound experience" (LG's words, not mine). In theory, this sounds like an interesting idea - listen with the earbuds in quiet areas, and rock out with the speakers at home or while you're outside. In practice, though, it's not as ideal as LG would want you to think.

You might not like the TONE Studio's appearance, but it's hard to deny how comfortable it is - so much so, in fact, that you may legitimately forget that you're wearing it sometimes. This is thanks to its durable plastic build, which keeps things lightweight despite all the components within. The piece in the middle that makes contact with your neck is soft and flexible, which allows it to sit snugly for all neck shapes. The earbuds themselves are lightweight as well, which makes them comfortable in your ears so long as you're using the right tips. 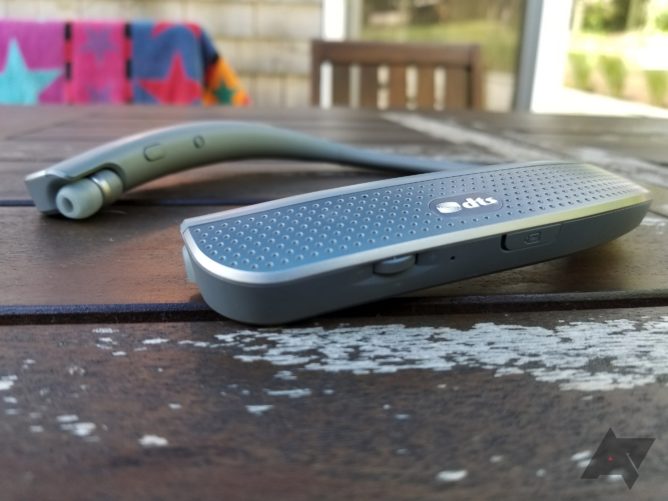 The various buttons and switches are a bit confusing at first, but they're pretty easy to learn. Switching between earbuds and speakers is as easy as flicking a switch. Other noteworthy functions include a volume scroll wheel (pictured above), a call answering/voice assistant button, an auxiliary input, and a skip and repeat rocker. Long-pressing the repeat button tells you your battery status, and while there's an alarm icon alongside the skip button, I couldn't get it to do anything. I'm not sure I'd want to set an alarm with my Bluetooth headphones in the first place. I'm not a fan of the battery status function, either, as there are only three possible answers: "battery high," "battery medium," and "battery low." These are better than nothing, but it's really not that helpful. Was programming in some battery percentage audio too difficult? 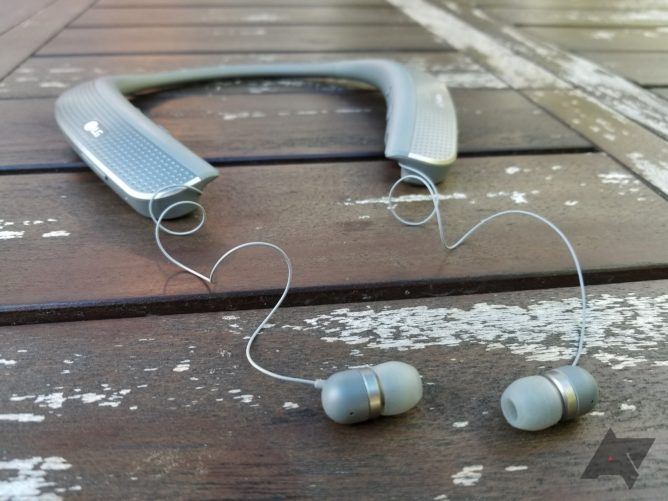 Pulling the earbuds out of the base is simple - a simple yank on them will get them to come out up to 8.5 inches. The wires that emerge are thin, but they seem sturdy enough. Should you not want that full 8.5" length of wire, you can stop pulling whenever, and the wire will stay put (kind of like the stops on a car door). To retract them, just give them another pull (or two, if they weren't extended all the way) and they'll shoot back up. You may have to give them a small push to get them into their housings, though.

In our review of the LG TONE Infinim, another premium offering in the TONE lineup, we thought that the sound through the earbuds was pretty good. That remains true here, with nice and clear sound coming out of the lightweight buds. The mids sound good and the bass produces some satisfying thunks, even if it isn't physically all that strong. Then again, given the $229.99 MSRP, it'd be pretty unfortunate if anything else were true. 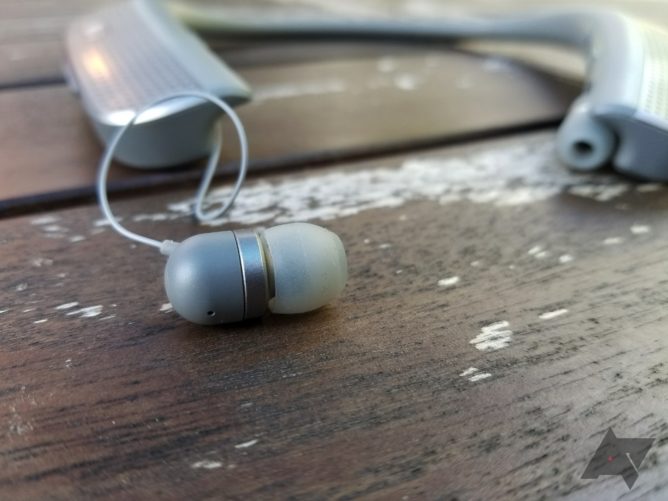 The speakers are more of a mixed bag. LG put four speakers (two on top, two on bottom) in the TONE Studio in an attempt to deliver a surround sound effect. The result? The effect is there, but the quality of the sound that the speakers pump out simply isn't very good. It's noticeably muddier than that of the earbuds, which is a disappointment considering the speakers are the highlight of this device. Additionally, when you crank up the sound (it can get pretty loud), you get this buzzing effect on your neck, which you may or may not like. LG calls this "Wearable Bass," but it seems more like a side effect of having speakers right on your skin than a real feature. The bass on these tiny speakers isn't anything that should be bragged about anyway; it's not very powerful. 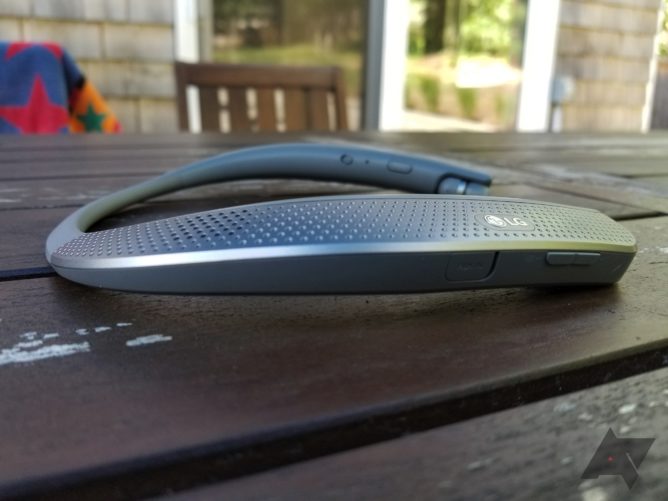 I could see listening to podcasts, YouTube videos, and maybe even a few movies with these for the surround sound effect, but I'd rather just use the built-in earbuds if I'm listening to music. You also have to think about the general usability of the speakers; when exactly should these be enabled? If I'm at home, I'd much rather use a laptop or a Bluetooth speaker. If I'm out and about, I'd prefer not to blast whatever I'm listening to to other people in the area. On top of that, if it's a loud place, I wouldn't be able to hear the speakers too well anyway.

That leaves just a few really specific use cases for the speakers - perhaps if you take a lot of quiet walks in the park or have a car with a busted radio, the speakers could be considered a pro for you, but otherwise, they'll likely be used very sparingly.

This is an area in which the TONE Studio really excels. Most in-ear Bluetooth headphones have to squeeze their batteries in some nooks and crannies at the risk of sacrificing ergonomics, which means they have to be small and rather ineffective. But thanks to this headset's large base, battery size constraints really aren't an issue. In fact, the battery life is actually one of the main selling points for the TONE lineup, which can't be said for many wireless electronics. 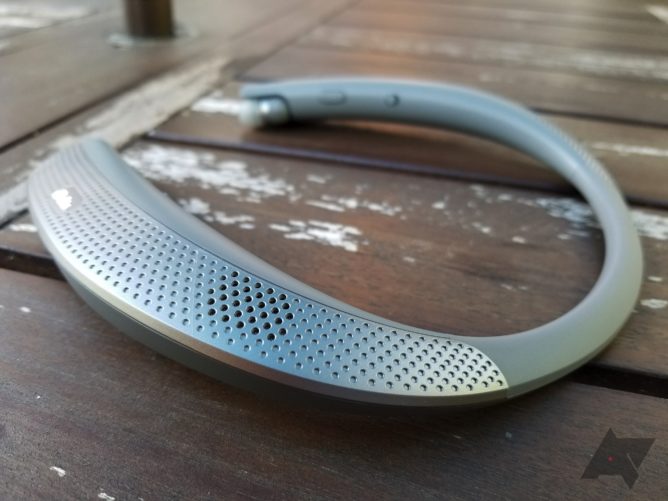 LG quotes 6 hours with the speakers and a whopping 35 hours with the earbuds, as well as a standby time of up to 61 days. This seems on par with what I've experienced; after playing music through the earbuds for about six hours, as well as about two hours of speaker time, I got the "battery medium" voice when I powered it on. And after leaving them untouched for about two weeks and turning them back on, I still got the same "battery medium." Granted, this isn't a very accurate test, but let's put it this way: you won't need to worry about recharging every night with these. When you do need to recharge, you'll be able to do so in under two hours.

The TONE Studio is marketed as a "wearable personal speaker," which I don't think is appropriate given the quality of the speakers relative to the earbuds, as well as the limited realistic use cases for those speakers. I'd prefer to think of the TONE Studio as a very good set of Bluetooth earbuds with excellent battery life that happen to come with some okay-ish speakers, but at that point, you may as well just buy the TONE INFINIM for about $90 less, which feature virtually everything that the TONE Studio has save for the subpar speakers.

I enjoyed using the TONE Studio, but not for the reason that LG wants you to buy a pair. The MSRP of $229.99 is absolutely ludicrous, but the current price on Amazon as of this article's publishing is a lot more palatable, at just above $170. If it were my money, I'd definitely go for the aforementioned TONE INFINIM, and use the $90 or so to buy a decent Bluetooth speaker. Sure, it's not as convenient to carry two things around, but when those two things separated are both superior in their respective applications and cheaper, it's a no-brainer.

If you think you'll find a use for the speakers and wish to purchase an LG TONE Studio, you can do so from a variety of retailers, including Amazon, B&H, Target, and Walmart. 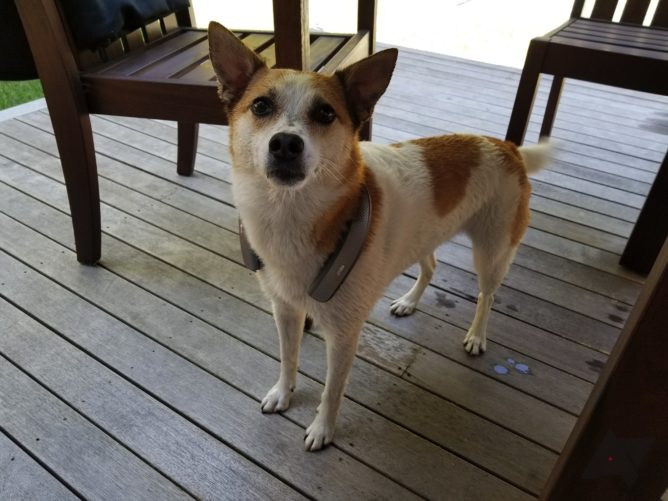 [Deal Alert] T-Mobile is offering 'buy one, get one' deals on the Galaxy S8 and the Moto Z2 Force