LG has announced its second-quarter results for the 2017 and things don't look too good for the mobile division, yet again. While both the Home Appliance & Air Solution unit and the Home Entertainment unit have brought in profits ($412.5M and $303.8M, respectively), thanks to strong sales of fridges, washing machines, and OLED TVs, the Mobile Communications division continues to bleed billions of Korean won.

According to LG, the mobile unit had $2.39B in revenue, but the operating margin was again a loss of $117.27M. That's slightly less than last year's Q2 where the unit lost $132M largely due to the G5's mitigated reception. While the good news is that it's better than last year's Q3 when the unit cost the company $389M and Q4 when it went further down to a loss of around $420M, it is again worrisome because the mobile division had almost broken even last quarter in Q1 2017 by only losing $180K. That's thousands, instead of billions. It was on a good path, but the downward spiral looms again. 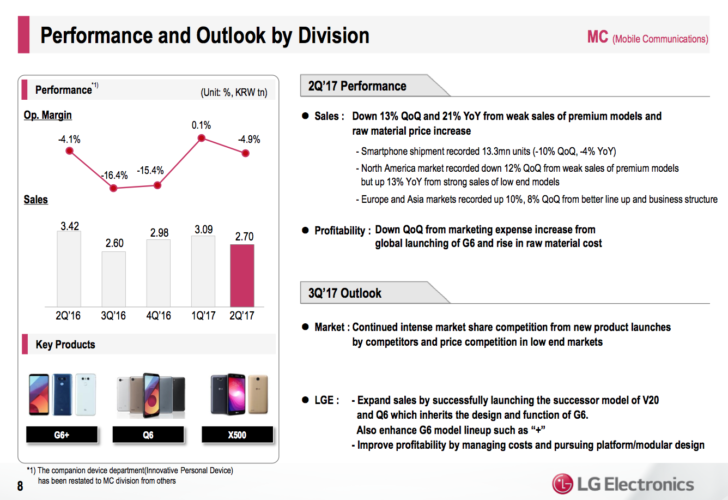 LG is blaming this poor performance from the mobile division again on "weaker than expected" G6 sales and "increase in component costs." It's hoping that the new Q series and its Q8 as well as the to-be-announced V30 will improve performance in the second half of 2017. It's sad that we keep hearing this same promise of "it'll be better next time, we swear," quarter after quarter. I love LG's products and I just hope that the mobile division can find a way to straighten itself out and appeal to a larger customer base because more options and more competition are what keep this industry interesting. 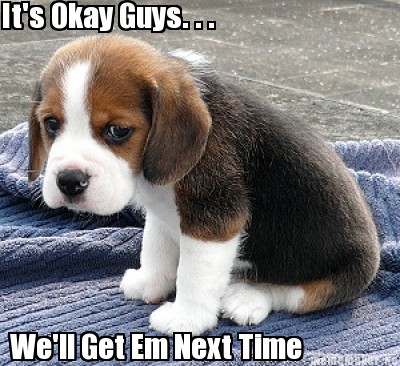 The LG Home Appliance & Air Solution Company accounted for the largest share of the second quarter’s revenue and operating income, KRW 5.25 trillion (USD 4.65 billion) and KRW 465.7 billion (USD 412.5 million) respectively. Among second-quarter highlights were strong sales in the Korean market, up 43 percent from the April-June period in 2016. J.D. Power just announced that “LG received more 2017 customer satisfaction awards for Kitchen and Laundry Appliances than any other manufacturer.” * The business unit expects to see growing demand in North America, Europe and Asia while premium home appliances such as InstaView refrigerators and TWINWash washing machines are expected to contribute strong margins.

The LG Mobile Communications Company saw a challenging second quarter with revenues of KRW 2.70 trillion (USD 2.39 billion) and an operating loss of KRW 132.4 billion (USD 117.27 million), nearly unchanged from the same period a year ago primarily due to weaker than expected premium smartphone sales and increase in component costs. The North American market remained strong, contributing a 13 percent increase in sales compared to the same period last year thanks to strong performance of the company’s mass-tier lineup. The introduction of the new Q series and the rollout of a new high-end device in the weeks ahead are expected to bolster the company’s performance in the second half of 2017.

The LG Vehicle Components Company continued its strong growth with second-quarter sales of KRW 882.6 billion (USD 781.7 million), an increase of 38 percent from the same period in 2016, in large part due to the success of its telematics business and components for the recently-launched Chevrolet Bolt electric vehicle in the United States.  Ongoing investments in new business areas such as advanced driving assistance systems (ADAS), resulted in an operating loss of KRW 16.4 billion (USD 14.5 million) for the quarter. Those investments are beginning to bear fruit; LG just announced its first ADAS camera partnership with a leading German automaker. The market for smart electric vehicle components is expected to see strong growth in the second half of the year, reflecting wider availability of the Chevrolet Bolt in North America and growth of other electric vehicles in Europe.

LG Electronics’ unaudited quarterly earnings results are based on IFRS (International Financial Reporting Standards) for the three-month period ending June 30, 2017. Amounts in Korean won (KRW) are translated into U.S. dollars (USD) at the average rate of the three-month period of the corresponding quarter ― KRW 1,129.05 per USD.

LG Electronics will hold an English language conference call on July 28, 2017 at 09:00 Korea Standard Time (00:00 GMT/UTC). Participants for the English conference call are instructed to call +82 31 810 3061 and enter the passcode 9084#. The corresponding presentation file will be available for download at the LG Electronics website (www.lg.com/global/ir/reports/earning-release.jsp) at approximately 16:00 on July 27, 2017. Visit http://pin.teletogether.com/eng and pre-register with the passcode provided. For those unable to participate, an audio recording of the news conference will be available for a period of 30 days after the conclusion of the call. To access the recording, dial +82 31 931 3100 and enter the passcode 142860# when prompted.

* LG received the highest numerical score in the respected segments of the J.D. Power 2017 Laundry and Kitchen Appliance Satisfaction Study, based on 6,241 (kitchen) and 14,745 (laundry) total responses, measuring customer opinions about their new appliance purchased in the previous 12 months, surveyed February-March 2017. Your experiences may vary. Visit jdpower.com.