Ever noticed that Chrome suggests copied links when you go to search or enter a URL? What at first glance might have seemed like a new feature in the 4th developer preview of Android O now appears to have been around for a while, and have nothing to do with the OS itself.

We were tipped about this yesterday and after some investigation, it seems that this is actually a feature of the Chrome app. According to Artem, it's been around in the iOS version of the app for some time, but it looks like it's new in the latest Chrome stable v59 and works on Android versions at least as far back as 4.4 KitKat. 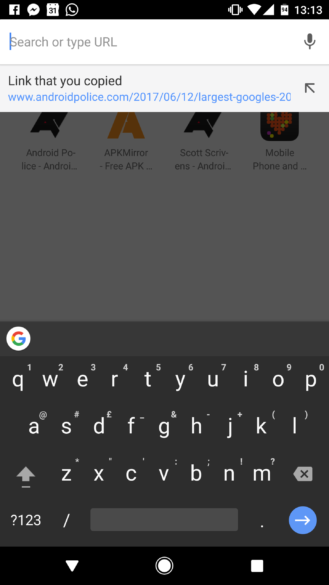 We found a Chromium ticket discussing its addition, and it confirms the functionality was added in April. Another post talks about adding it to Chrome on other operating systems.

It's not a mind blowing trick, by any means, but it's a useful little addition that might save someone a fraction of a second at some point.