Motorola loves to toss out figures about the adoption rate for Moto Mods, but it hasn't issued any really solid ones in regard to which Mods people are using or how often they're using them. The reality is that this is probably because the battery Mod - the most painfully, glaringly, obvious use case for Mods - makes up the great bulk of that uptake. I mean, is it really hard to believe that when you put a slightly-too-small battery in your flagship phone, owners of said phone might then be interested in increasing its battery life? Something of a self-fulfilling prophecy, I think.

I admit, it is well beyond easy to be cynical about Motorola's Z line in 2017. Two of the three Z handsets have been refreshed, and the most notable change this year is one shared by both: dramatically reduced battery capacity. If I were evaluating Motorola's business strategy here, I might suggest this was a very savvy move meant to increase sales of battery Mods by decreasing the battery life of its phones out of the box. In fact, I would do more than suggest it - I would contend that it is plain as day this is what Motorola is doing.

Motorola claims that reduced battery capacity in its new smartphones is down to a quest to minimize thickness, which will allow for more comfortable use of comparatively thick Mods. Except, this explanation is nonsensical on its face.

Most of Moto's chunkiest Mods - the JBL SoundBoost and the Hasselblad camera - are already so large that no amount of shrinking the phone is going to make them something you'll want to put in your pocket. Others, like the InstaShare projector, aren't even designed to be used while you're holding the phone, so what difference does it make how much thickness they add? The only time when I think the phone's girth really makes a difference in terms of usability and portability is when you've got a battery Mod attached. But here's the thing: even that is just plain silly as a reason to shrink the phone's internal battery. 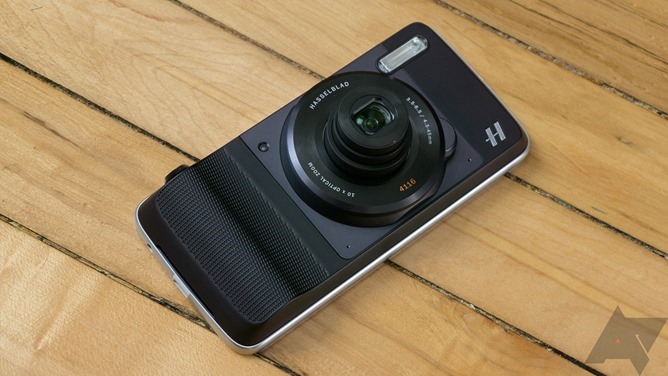 There is never going to be a phone thin enough to make this pocketable.

By making the phone 1-2mm thicker, substantial capacity can be added to the internal battery (say in the neighborhood of 25%+... like last year's phone). The dimensional cost of this is far less than that of the very chunky Turbo Power Mod Motorola released alongside the new Z2 Play. In addition, because of the way these battery Mods work - by charging the phone's internal battery, not powering the phone directly - there is inherent inefficiency in the Mod that is going to substantially undercut whatever measured capacity it claims to add. As such, it's not even true to say that you're "adding" 3490mAh of battery capacity to your phone with a TurboPower Mod. In reality, that figure is very substantially lower because of charging inefficiencies. While it obviously adds more effective capacity than an internal battery 700mAh larger would, it's also a hell of a lot thicker and heavier, and the stated capacity definitely doesn't tell the whole story.

Motorola also has partners very eager to see Mod sales grow: carriers and retailers rely on the sale of accessories like cases and chargers to increase their effective profit margin per handset sold (you know, accessories like Bluetooth headphones for your headphone-jackless phone). Moto Mods feel designed from the ground up to help carriers push high-dollar accessories on customers already committing to buying a pricey smartphone, and the battery Mod is undoubtedly the easiest sale to make. I can only imagine what the margins are like on the absurd Hasselblad camera Mod, but they've got to be pretty damn good, because that thing is legitimately awful. 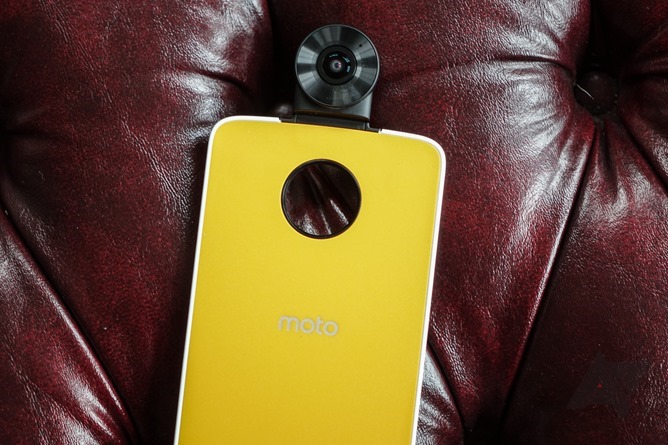 Moto's new 360 Cam Mod might make sense in an executive meeting where buzzwords like "millennials" and "VR" are thrown around - far less so in the real world.

And sure, I get it: Yes, most Moto Mods are silly, but the battery Mod makes sense. I can appreciate the idea behind the battery Moto Mod. Really - it does make sense. It's a very easy-to-use, custom-fit battery case for your phone that goes on and off without skipping a beat. But even considering the benefits of the battery Mod, which are quite real, it is simply impossible for me to see Motorola's decision to drastically cut the battery capacity of its Z phones this year as anything but a business move. And this isn't to mention the fact that Mods have left Motorola basically unable to evolve the look and feel of the Z phones in any major way at a time when it's clear that smartphone design is undergoing some notable shifts.

I'd have a harder time being quite so sour on this business if Moto had introduced compelling new Mods that you'd want to have attached to your phone regularly, but they haven't. There's very little evidence most consumers are even interested in 360-degree cameras, let alone that attaching one to your smartphone is going to be the way people find optimal to use them. And at $300, that's a hell of a tough sale. The gamepad Mod, which is still without a price or release date, looks a bit more interesting, but it's not as though such a thing is going to create a mini-console ecosystem for Android. Sure, some people out there (like those of you reading this article) might find the idea absolutely brilliant in combination with a library of console emulators, but this is not a mainstream consumer use case. The gamepad, then, seems destined for relative obscurity (and that's if it's even any good).

A reason to Z

So, Moto's renewed case for the Mod ecosystem is an expensive 360-degree camera almost guaranteed to become a free holiday sale bundle item later this year, and a gamepad that while certainly kind of neat is highly unlikely to be the sort of thing that sells in meaningful quantities. I am not feeling like the Mod story is unfolding in a way that is selling the concept effectively.

Instead, Motorola is now trapped with a basic phone design that is starting to look a bit long in the tooth, and its one major strategy pivot seems to be to taking something out of your phone in an effort to make you pay to get it back (battery life). I'm happy to be convinced otherwise about Mods and the Z series, Moto, but this just isn't looking good. 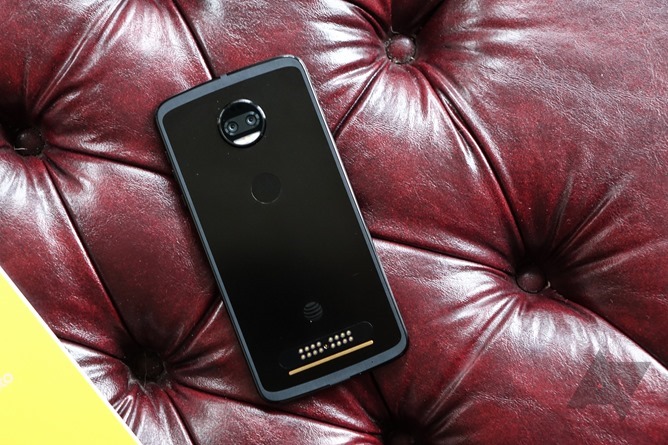