Back in March, Cody discovered hints of the Google app adding video previews and autoplay functionality. Since then, we didn't hear anything about the feature or spot any signs of it until today when reader Tycho pointed that there's a new "Video" section in the Google app's settings.

I've checked all my devices, ranging from a Galaxy S7 Edge on the latest Google app beta to the Nexus 7 (2013) which I rarely update and is still on version 7.3.19.21 of the Google app from many moons ago: they all have it. I'm quasi-sure the setting wasn't there before, I've also searched every recent screenshot we've received of the Google app's settings and it's not there. So I'm leaning toward this being a server-side switch that got flipped on for everyone at the same time very recently. But I could possibly be wrong. 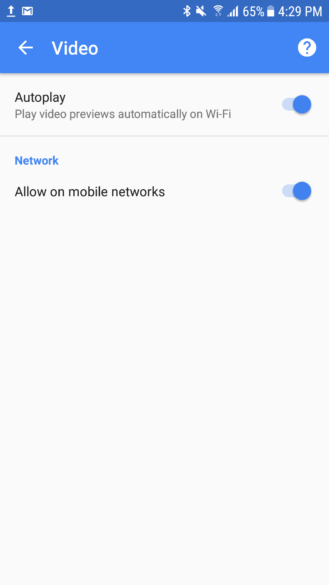 So what does that autoplay feature do and where does it work? At first, I thought the function wasn't live yet. Searching for "Despacito" or "Thunder" returned big video previews of the songs on YouTube but didn't autoplay no matter how long I stared at the screen and waited for them to start. Same for any "how to" query I could think of: a YouTube video would be the top result, but it wouldn't autoplay.

Then this article from Mashable from a couple of days ago put me on the right track: the function seems to be live mostly for movie trailers now. To see it, look for something like "Justice League," "Transformers The Last Knight," or, "Lego Ninjago movie." You'll get the usual Google Knowledge Graph card, whether on mobile or desktop, but above the movie's synopsis will be a new inline video that looks slightly different from other YouTube results in the search. 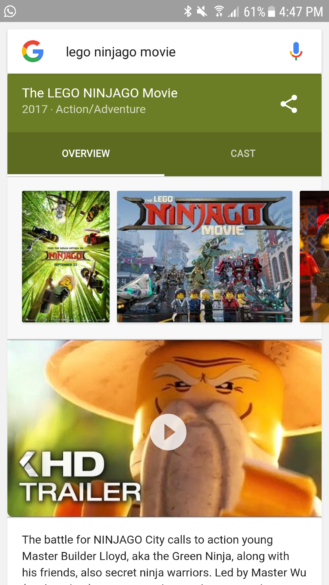 The in-line video appears above the movie synopsis.

Right now, the video loading circle spins for a few seconds but doesn't autoplay, so the feature may not be 100% working just yet or it might need a faster connection than mine. Technically, it should start autoplaying the video without sound until you click the video and then the sound comes on. But whether you manually play it or it autoplays, the video displays in-line, unlike all other YouTube videos which send you off to the YouTube app. 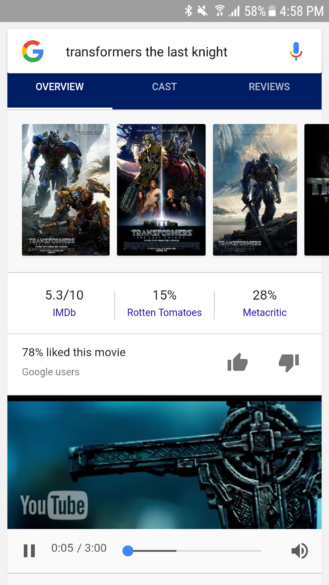 The video plays in-line inside the Google app.

However, not all movie searches are created equal. "Thor: Ragnarok," "Dunkirk," "Pirates of the Caribbean," "Spider-Man Homecoming," and more do not show the video snippet above the synopsis. I'm not sure what's the difference, but it looks like Google will have to better work on its Knowledge Graph cards to surface those videos for you. 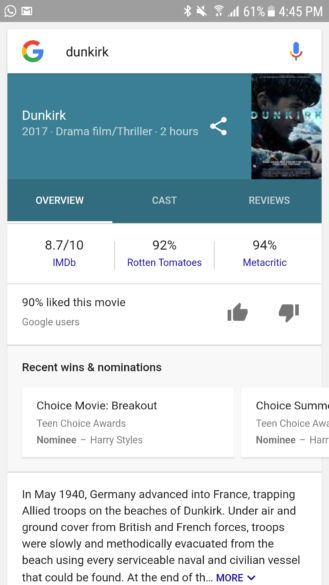 Not all movies have these videos though.

Let us know if you find other types of searches that bring up these in-line autoplaying videos and if the videos do indeed autoplay for you now or not yet.

[Update: APK download] Waze for Android Auto is out of private beta and available today

Meizu makes the Pro 7 and Pro 7 Plus official, dual cameras and secondary AMOLED screen in tow