The phones have been praised for their near-stock Android experience and now all three of the new models have been spotted on JB Hi-Fi. They may well be in stock at other retailers in the region, too. Pricing starts at 249 AUD for the entry level Nokia 3, which is offered in black or silver. The Nokia 5 can be had for 329 AUD, and is only available in black. The most accomplished of the three, the Nokia 6, also comes in black or silver and will set you back 399 AUD. They all run fairly clean versions of Android 7.1.1 out of the box. 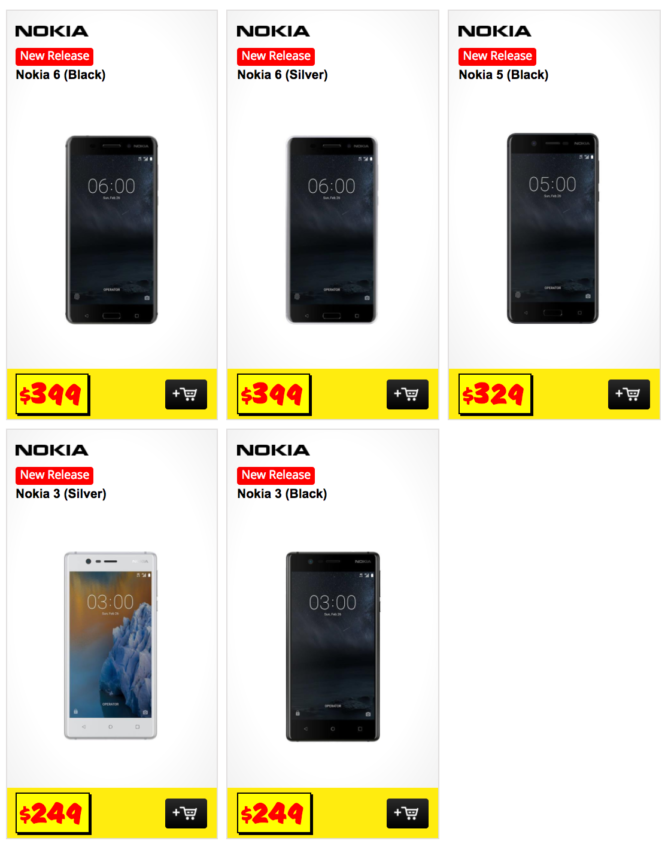 Specs-wise, none of these phones is that exciting. The Nokia 6 leads the pack with a Snapdragon 430, 16MP rear camera, and a large 5.5" full HD display. The Nokia 5 offers the same processor in a smaller frame, with a 5.2" HD screen and a 13MP lens. Both have similar metal bodies and front chin-mounted fingerprint sensors, but the larger model has an extra GB of RAM at 3GB – that might make all the difference. The runt of the litter is the Nokia 3, with a 5" HD panel, 8MP camera and a MediaTek MT6737 chip. As with many of the cheapest Android phones, it also has capacitive buttons, which is enough for me to call a pass.

Let us know in the comments if you spot the new devices for sale anywhere else Down Under.