Android Auto seems to have had a lot of issues as of late, which isn't great considering you don't want to be fiddling with a screen on your dash while barreling down the freeway in a two-ton mass of metal and glass. In keeping with that theme, a recent issue left users unable to read or reply to messages on their Android Auto head units. Fortunately, though, Google was able to fix this via a server-side update.

It appears that while there were issues with both reading and replying to messages, the vast majority of people had problems with replying. Whenever people would try to reply to a message from any app through Android Auto, the system would simply respond with "I'm sorry, I can't help you with that right now," or "I don't know how to do that yet." This would occur for people with a wide variety of phone models, car models, Android versions, Google app versions, and Android Auto app versions. Seeing as this is one of the main selling points of Android Auto, it's easy to understand why people were getting frustrated. 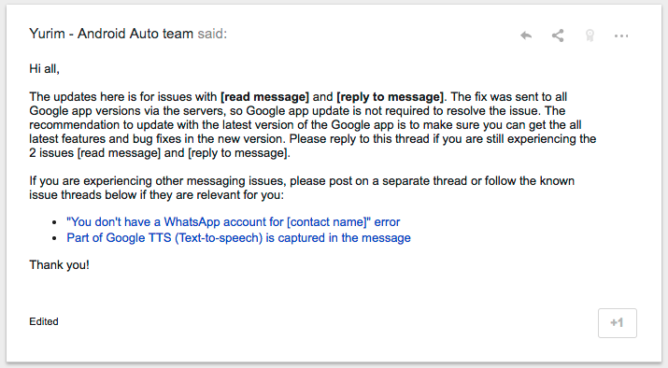 The thread was first created on July 12th, but only on July 18th was the issue marked as resolved by a member of the Android Auto team. An update to the Google app is advised, but not necessary since the fix was included in a server-side update. This team member also replied today with a more detailed response that also included two similar issues - one with WhatsApp, and one with TTS. I found that pretty hilarious.

Google, you really need to work on Android Auto's reliability. This is embarrassing.

Android Wear 2.0 update is now available for the smaller 1.45" ASUS ZenWatch 2 as well