WhatsApp was updated to version 2.17.265 on the beta channel yesterday and as most times, it didn't seem like the new version brought anything new to the table. But it turns out that this isn't the case this time; you just need to be on the newest and hottest version of Android to notice the change. WhatsApp now support picture-in-picture video calls on Android O.

When you start a video call on Android Nougat and below then tap back, the call goes into the background and the video gets paused while the audio continues and you go back to your text conversation and can do other stuff on your phone. On Android O, when you tap back, the video shrinks down to a floating window and you can continue your call — with video — while also texting and using the app normally.

The floating video can be moved around but it only snaps to one of the screen's edges. It enlarges momentarily when you tap on it then shrinks back to its normal size. And if you swipe it down, it gets dismissed, which puts the call in the background and pauses video like on Nougat and below. 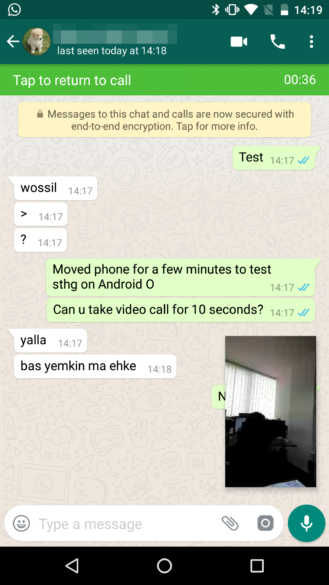 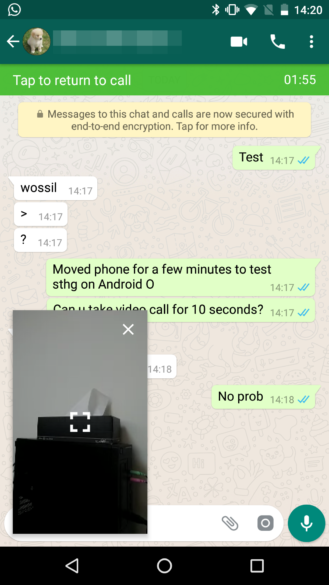 The Picture-in-Picture API was only added in Android O natively, so it's unlikely this feature would come to WhatsApp on older versions of Android unless the team wants to create its own code for it. And WhatsApp isn't the first app to support it, we've already seen Duo, VLC Beta, Play Movies, Chrome, and I'm sure plenty of other apps implement it.

If you want to try out this new feature of WhatsApp, you need to have a device running the Android O Dev Preview and you have to join the WhatsApp beta program on the Play Store or manually grab the latest APK from APK Mirror.

Google's Android O engineering team hosted a Reddit AMA, here's what they had to say