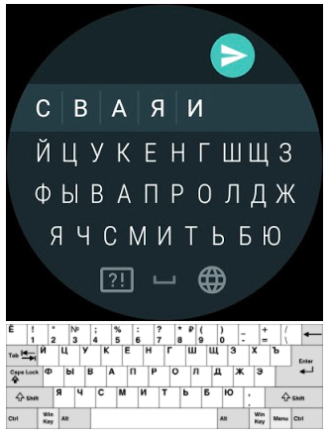 As a forum user did note in a comment, two of the characters can be substituted by long-pressing other characters ('Ё' for 'E' and 'Ъ' for 'Ь'), but that still leaves 'Э' and 'X' out. From what we can tell, this seems to be due to the round screen cutting characters off. Though both of these issues are from a few months ago (April and May), both have just been replied to by a Google community manager with this message:

Just wanted to update this thread to say that this has carefully been considered and will be coming in a future update.
Thanks everyone for your feedback!"

In other words, Russian and Hungarian speakers won't have to live without some necessary characters on their Android Wear device's keyboards for too much longer. It's entirely possible that other languages are affected as well. Quite honestly, this is pretty hilarious not just because nobody noticed this in development, but also because it took months to resolve. Google isn't doing their "treating customers like beta testers" reputation any favors.

Deezer updated to include support for Android Wear [APK Download]