It's quite fitting that the first article I write when I get back from my honeymoon (wipe your tears, ladies and gentlemen, this one's taken) is about WhatsApp. For the past years, I've reported about the app's different interface and functionality changes here on Android Police and while I was sipping cava by the sea or emphatically nodding "Si, si," to everyone in Spain while putting my new husband's feet to the test (not like that, you dirty-minded people, we were walking a lot everywhere), WhatsApp rolled out a couple of new things to its app... that no one in the AP team wanted to write out of veneration for my status as WhatsApp know-it-all guru. (Or, more realistically, because no one here actually uses WhatsApp so they didn't know what to say.) So you'll have to excuse the delayed reporting on some of the "news" here that isn't very new anymore, but oh well, extenuating circumstances and all.

There are 3 new things to discuss in the WhatsApp app. First is the ability to send any file type. Previously, the app was limited to sharing documents mostly from .pdf, .docx, .xlsx, and similar file extensions. As far as I can recall, it didn't support .zip (although that was rumored), .apk, or even .jpg. You could technically share images, but they'd be compressed whereas sending the .jpg shares the entire file uncompressed. Now, all of these file types are shareable from the Attach > Document pop-up.

As far as we can tell, the option is rolling out slowly to more users so your mileage may vary on whether or not it's live for you yet. Technically, it should easily see all files you have in your local storage's Download folder, including music, photos, videos, APKs, zips, etc... 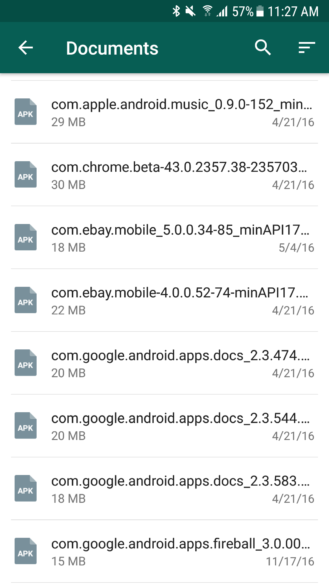 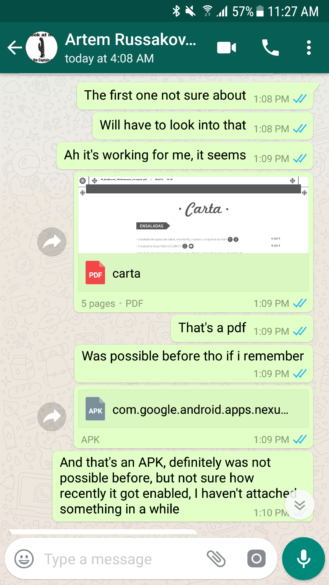 The second change is more aesthetic than functional, though it does significantly improve WhatsApp's usability for media sharing. When someone sends or receives multiple images in bulk, they will be grouped into one bundle inside the chat instead of showing individually. It's much more compact when you're going through the conversation, and when opened, it displays all the full-sized images in succession. It's a great solution for people and groups where a lot of media is shared in bulk. 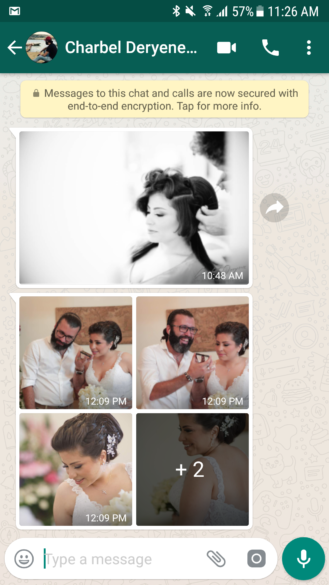 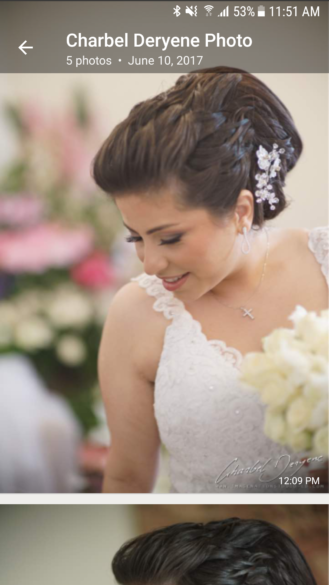 Trust me, this isn't an excuse to share my wedding photos with you, but it's the only bundle I could find in my recent WhatsApp chats.

And the last change is a visual modification to the call screen. You now have to swipe up to answer instead of sideways, and the interface looks a little more polished. 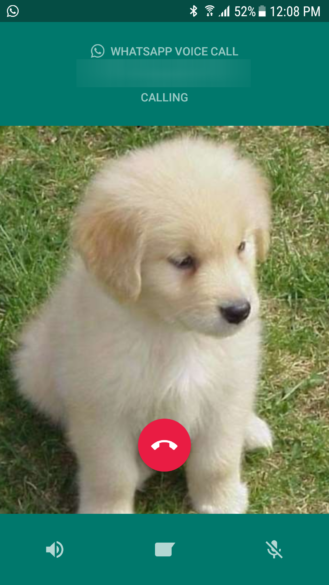 The bundled media option and new call screen should be live in the latest WhatsApp betas, which you can find on APK Mirror or by joining the official Play Store beta and updating the app there. As for sending more file types, as I mentioned, it appears to be rolling out slowly to everyone so be patient if you don't see it yet.

After being available to beta testers, these features along with easy text formatting are now rolling out to those on the stable release of WhatsApp, according to Reddit user armando_rod. Version 2.17.254 started rolling out 2 days ago and seems to be very, very slowly reaching more users, since everyone I checked is still stuck on 2.17.223. So if you're anxious, here's a direct link to the stable .254 file on APK Mirror to get it right away.

Here's the official changelog, but keep in mind that sending any file type was probably a server-side switch, so you might have it even if you're on an older version of WhatsApp.

• You can now send documents of any type. To send a document, open a chat, tap attach — document.
• From the in-app camera, you can now swipe up to see all of your photos and videos.
• When typing text in a chat, you can tap and hold to select the text to easily bold, strikethrough, or italicize it.
• Various design improvements for voice and video calls.