Do you find yourself thinking Google Hangouts would be perfect if it only had a few more secret shortcodes to make emoticon art? No, I didn't think so. I guess that means today's update to Hangouts probably won't convince anybody that it has hit the pinnacle of excellence; but it will give us five more easter egg phrases, if that helps.

This isn't the first time Hangouts has seen new codes. The first shortcode brought the beloved ¯\_(ツ)_/¯, followed shortly thereafter by twenty additional codes. Strangely, the latest batch breaks away from using terms that fit the emoticon, instead modeling them after what appear to be usernames. Good luck trying to remember these for future use. 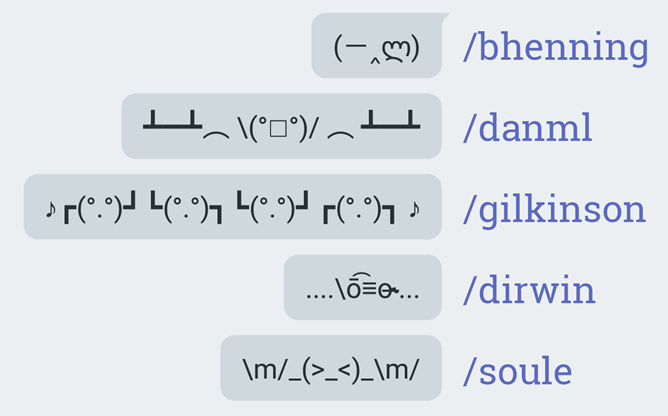 To be fair, these are some pretty good emoticons.

Remember, to use these shortcodes, the message box must contain just a forward-slash (/) and the shortcode. Anything else and it won't expand.

It's worth noting that four out of five of these also have perfectly logical names in the code, all of which would have been easier to remember than the shortcodes given to them. The first, bhenning, is called "ben," which isn't very helpful. I think it should have been called "facepalm." After that, it's "double flip" for danml, "music dance" for gilkinson, "racecar" for dirwin, and "rockout" for soule.

There are probably some other bug fixes or under-the-hood adjustments in this release, but none of them surfaced during an examination. If you stumble onto anything special, let us know in the comments.