Qualcomm claims that the six patents included in the suit are not part of any industry standard and that it is therefore not obliged to offer to license them as part of those standards. Qualcomm also released an interesting infographic PDF about the suit, as well, for anyone interested in how the company is choosing to market the details of the case. 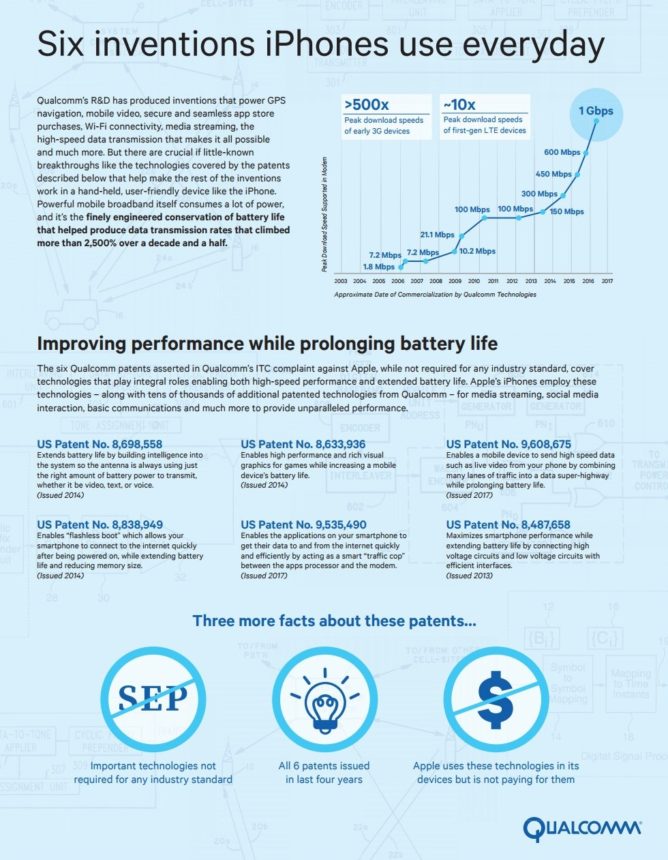 Most of the patents in question don't seem to point to hardware (except #8,487, 658) but almost exclusively apply to optimizations in software to improve performance. Qualcomm's marketing fact-sheet doesn't do a great job of illustrating what each does since it reduces most things down to the technical level of "data super-highways," but you can generally understand it. Globally, they apply to methods of saving power, often while transmitting data, by cutting the right corners.

Qualcomm expects the ITC to respond in August, and that the case filed in the U.S. District Court for the Southern District of California will begin next year. Both the ITC complaint and the lawsuit are almost assuredly a response to Apple's suit filed earlier this year.

I hate to editorialize too much in this circumstance, but the content and complexity of this matter almost beg it. So if you don't want my opinion on the subject, you can stop here and consider yourself informed about the general details of the case.

Even leaving aside the curiosity that Qualcomm isn't also pursuing an action against Intel for being the manufacturer and supplier of the potentially infringing modems, I think it's fairly clear that this is just a counter-claim being made to force Apple to back down or commit even more resources to the fight. While it's possible their claims are legitimate, the timing is questionable. Meanwhile, Qualcomm is still in the middle of an FTC antitrust investigation, and in the press release for this lawsuit, it is advertising the fact that the patents involved aren't being FRAND licensed. It's stunning. That image alone, I think, is illustrative.

Regardless of opinion, this is definitely not the last that we will hear in the ongoing Qualcomm saga. The full press release is available below:

Qualcomm products mentioned within this press release are offered by Qualcomm Technologies, Inc. and/or its subsidiaries.

Qualcomm Incorporated (Nasdaq: QCOM) today announced that it is filing a complaint with the United States International Trade Commission (ITC) alleging that Apple has engaged in the unlawful importation and sale of iPhones that infringe one or more claims of six Qualcomm patents covering key technologies that enable important features and functions in iPhones. Qualcomm is requesting that the ITC institute an investigation into Apple’s infringing imports and ultimately issue a Limited Exclusion Order (LEO) to bar importation of those iPhones and other products into the United States to stop Apple’s unlawful and unfair use of Qualcomm’s technology. The Company is seeking the LEO against iPhones that use cellular baseband processors other than those supplied by Qualcomm’s affiliates. Additionally, Qualcomm is seeking a Cease and Desist Order barring further sales of infringing Apple products that have already been imported and to halt the marketing, advertising, demonstration, warehousing of inventory for distribution and use of those imported products in the United States.

“Qualcomm’s inventions are at the heart of every iPhone and extend well beyond modem technologies or cellular standards,” said Don Rosenberg, executive vice president and general counsel of Qualcomm. “The patents we are asserting represent six important technologies, out of a portfolio of thousands, and each is vital to iPhone functions. Apple continues to use Qualcomm’s technology while refusing to pay for it. These lawsuits seek to stop Apple’s infringement of six of our patented technologies.”

Qualcomm today also filed a complaint against Apple in the U.S. District Court for the Southern District of California alleging that Apple infringes the same six patents in the complaint filed in the ITC. The complaint seeks damages and injunctive relief.

Qualcomm expects that the ITC investigation will commence in August and that the case will be tried next year.

Qualcomm’s technologies powered the smartphone revolution and connected billions of people. We pioneered 3G and 4G – and now we are leading the way to 5G and a new era of intelligent, connected devices. Our products are revolutionizing industries, including automotive, computing, IoT, healthcare and data center, and are allowing millions of devices to connect with each other in ways never before imagined. Qualcomm Incorporated includes our licensing business, QTL, and the vast majority of our patent portfolio. Qualcomm Technologies, Inc., a subsidiary of Qualcomm Incorporated, operates, along with its subsidiaries, all of our engineering, research and development functions, and all of our products and services businesses, including, our QCT semiconductor business. For more information, visit Qualcomm’s website, OnQ blog, Twitter and Facebook pages.

Hulu adds live and on demand access to HBO and Cinemax, just in time for new Game of Thrones