Bluetooth speakers are a dime a dozen these days, now more so than ever. Fugoo is not necessarily a brand you might find on the shelf at your local electronics retailer, but the company is certainly not new to us here at Android Police. Known for making impressive weather-proof devices that still have good sound, Fugoo is back with two new offerings for those who want waterproof, outdoor Bluetooth speakers. The first of these is the Style-S, the larger and more robust of the two — the Go will star in its own review to follow.

The $140 Style-S is the new flagship for Fugoo, touted as an outdoor speaker that sounds stellar even if it's inside. It gets loud, looks nice, and can even pair up with a second unit to offer true stereo sound. It even lasts several hours, ensuring that your dance party doesn't come to a grinding halt. On paper, the Style-S seems almost too good to be true. Luckily, you have me to test these claims. 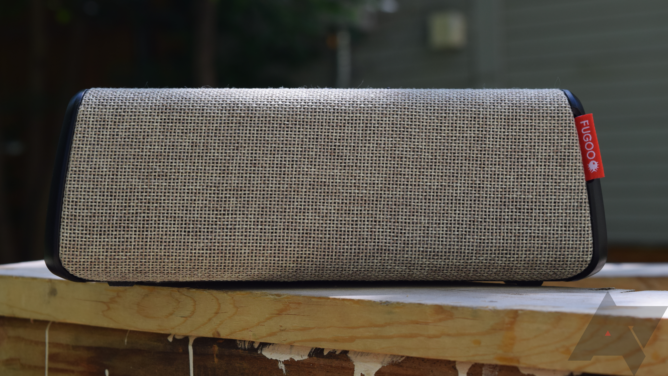 The Style-S fits right in line with Fugoo's previous speakers, the Style and the XL. The sort of irregular quadrilateral design with the base being wider than the top seems to be Fugoo's design language for this series of speakers, likely because it provides 360° sound. While it lacks the hardened, tank-like appearance of its rugged older brethren, the Style-S is nonetheless a looker.

With the burlap-like cover, the Style-S is neutral enough to fit in with most decorative styles, but it also has a tropical, beachy vibe to it. The roughness of it catches on my callouses when I pick up the speaker, but I expect that of something with such a wide weave. The bottom and sides of the Style-S are made from a black, rubberized plastic that is strong, durable, and soft to the touch. Along the top are the three main controls: volume up, the action button, and volume down. On one side, you will find the power and Bluetooth connection buttons that are barely distinguished from the rest of the plastic; the other has the microUSB charging port and 3.5mm line-in jack safely covered by a waterproof door/gasket. Underneath, there's all the FCC information and the accessory mount (which are sold separately by Fugoo). 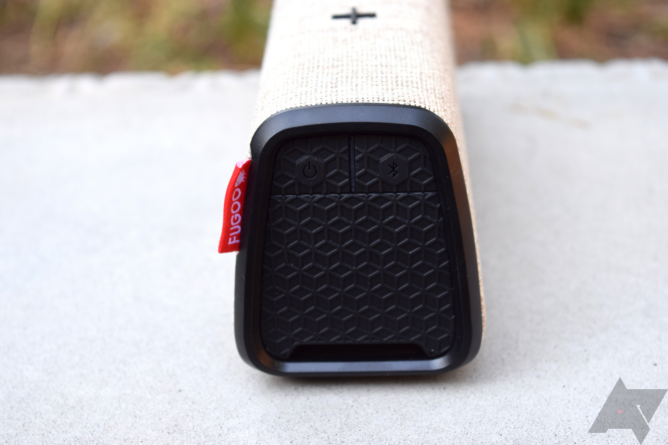 The presence of three buttons to control volume and playback might confuse some people at first. Volume up and down are quite self-explanatory, but like previous speakers, the action button (middle circle) controls play/pause and track skipping. A singular press will pause or resume the song, while using it in tandem with either the plus or minus button will go to the next song or back one. Holding the button at boot will allow you to switch between the two sound settings ("Normal" and "Outdoor"), while holding either of the volume buttons at startup will control the voice prompt level.

Unlike previous models, the Style-S comes with a single, non-removable cover — before, you got one "Sport" and one "Tough" jacket, depending on your needs and aesthetic preferences. This might disappoint some Fugoo fans, but that's the way the cookie crumbles sometimes. Overall, however, the Style-S is a nice-looking speaker, so much so that guests that I had over commented on it; they were quite surprised when I told them that it's weatherproof and designed for outdoor use.

As anyone knows, speakers can look pretty all day long, but sound quality is where it really matters. Here’s the tl;dr about the Fugoo Style-S: sound is tolerable, but not what I’d call good. As far as Bluetooth speakers go, it’s about what I’d expect from the product segment (which is not much). 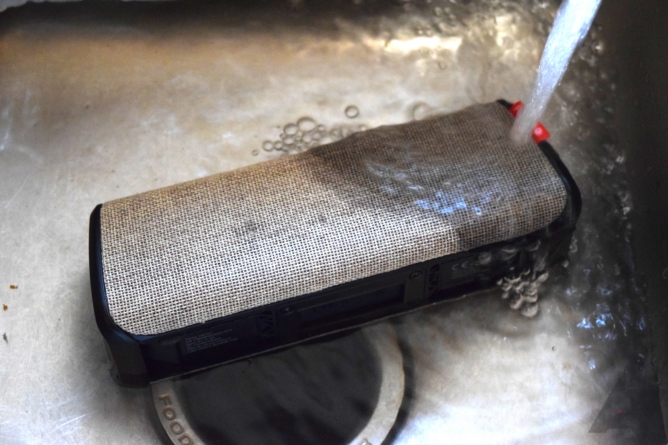 Previous Fugoo speakers matched or beat their competition in terms of sound, but volume seemed to have been lacking in some regard. With the Style-S, I have noticed that things have switched; it gets damn loud, but sound quality is overall not the best. Certainly not what I would have expected from a name like Fugoo (which was really liked by Cameron, a former writer here at AP).

At 50-60% volume is where things get dicey. Highs become very distorted, mids get drowned out by that distortion, and the bass continues to be lacking. For outdoor speakers, I have to say that I am quite disappointed. Even just sitting in my office, I can’t say that the experience is impressive. In light of this, I attempted to use the Style-S (I received two units and paired them together; more on that in a bit) outside while I shot some photos for another review. Even in its supposed element, the sound quality is poor – as you might expect, being outdoors causes some serious audio degradation. In the “Outdoor” EQ mode, it’s even worse. Sure, it gets loud… really loud. But maybe that’s the point? When I have people over and play some music, the quality of the output is very important. I am often playing very dynamic songs; I realize the futility of trying to get stellar sonic output from a Bluetooth speaker, but I digress.

Just to make sure I was thorough, I tested the performance via the 3.5mm jack. Quality improved (tested a FLAC audio file via the ES9018K2M 32-bit DAC in the Meizu Pro 6 Plus), but bass was still disappointing and the distortion remained very present at 60%+ volume. 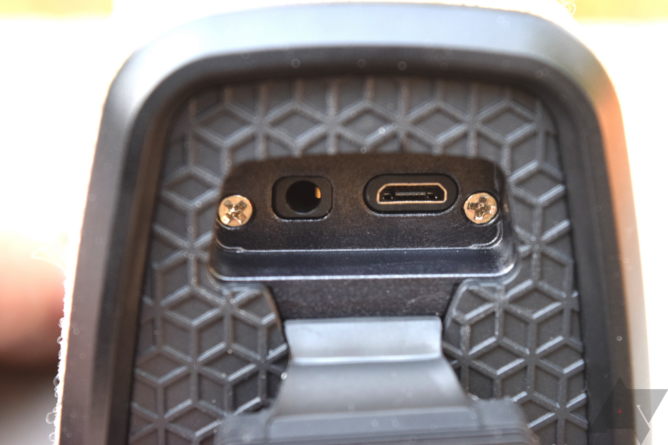 I suppose it would be fair to say that I am at a loss in regards to the Style-S and its sound quality. It’s just not that good.

Another place where I find that this speaker takes a step backwards from its predecessors is battery life. Previous models reached 40 hours, give or take – the Style-S pushes 15 hours. Sure, for me, that’s about a day and a half’s worth of work before I need to recharge the thing. And let’s be real here: any outdoor party that’s going past 15 hours in length has more problems than the Bluetooth speaker(s) dying. But that 15-hour mark is very inconsistent; both units I received fell well below that most of the time, or sometimes exceeded it, surprisingly.

I’ve mentioned it once or twice in this review, but the Style-S comes with the ability to pair with another one to create either a stronger audio experience or give you some stereo. I opted for the latter in my time with it (since having an extra unit didn’t help much with overall sound quality), which made for more interesting usage. It’s really easy to switch between whichever mode suits you, but I recommend the stereo option.

So where does this leave us? The long and short of it is that I think the Style-S is a pass, especially at the $140 asking price. It looks nice and it’s weatherproof/durable, but neither of those comes close to making up for the mediocre (or sometimes bad) sound quality and meh battery life. I am not a form-over-function fellow, which is why I cannot recommend this speaker based on the fact that it looks better than much of its competition. If any of you believe the opposite, where you want a speaker to look pretty rather than sound good, then I urge you to look into the Style-S.

It occurs to me that I sound (heh) pretty harsh in regards to this Bluetooth speaker. I tend to not have a high opinion of the particular product segment, but I know there are some good options in it. Until I have the vast experience that will come with time, I partly judge these devices based on their marketing materials. Sadly, this one doesn't measure up to its company's claims.

Here’s to hoping that the next entrant in the Style line of products addresses the lack of bass, distortion, and so-so battery life.

Bluetooth streaming is rolling out to Google Home