The Twitch Android app has always been good enough for watching streams, but now it's even better. Earlier today, Twitch announced a major new update for the Android and iOS apps, with a brand new interface and a few notable new features. Twitch says the new app should be available to everyone by early July, but we have the APK, because ain't nobody got time for dat. 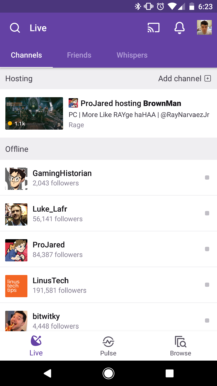 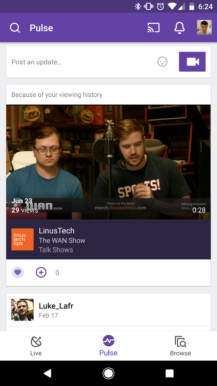 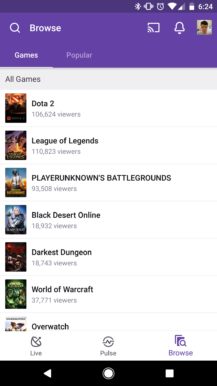 The new interface has a bottom tab bar with three pages - Live, Pulse, and Browse. There are also new swipe motions for selecting new videos, returning to previous streams, accessing playlists, and so on. The same notification center from Twitch's site is now in the app, and there's a new dark mode. 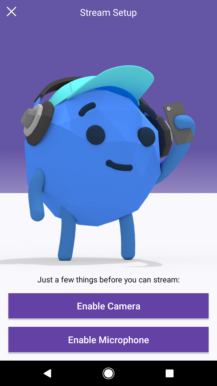 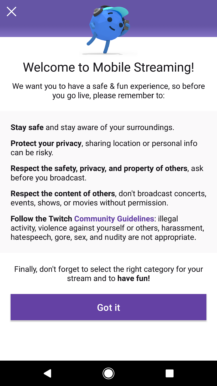 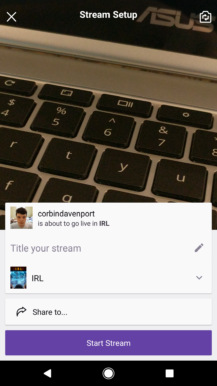 But perhaps the most important new feature is mobile streaming. Once you give the app access to your camera and microphone, you can start streaming straight from your phone or tablet - no PC with streaming software required. The default category for mobile livestreams is IRL, but you can change it to anything you want.

The update is just starting to roll out on the Play Store, but you can grab the APK from APKMirror right now.

SAN FRANCISCO--(BUSINESS WIRE)--Social video platform Twitch today announced a whole new look and feature set for its popular mobile app for improved discovery, accessibility, and functionality. The Twitch App will soon include the most requested features by both content creators and viewers, including the ability to begin live broadcasting directly from a smartphone camera with mobile streaming and the option to use a Dark Mode color scheme, among many other notable updates. The new Twitch App is rolling out today and will be available to everyone in early July.

Twitch App users will soon begin to see the following features appear upon updating to the latest version:

“Twitch has a vibrant community on mobile, with more than 83MM installs of our app,” said Tom Robertson, Senior Director of Product Management at Twitch. “With this redesign we’re ensuring that our amazing creators - who are the reason this community exists - are more discoverable than ever, both to their existing fans and those who have yet to find them. It also makes navigating the app more fun and intuitive, with all the best stuff available with a single tap or simple swipe. Not only will our creators reach a new audience through the app itself, the launch of Mobile Streaming gives them the opportunity to offer new content to their fans. We can’t wait to see what they create.”

Twitch is the world’s leading social video platform and community for gamers. Each day, millions of community members gather to watch, talk, and chat about shared interests. Twitch’s video platform is the backbone of both live and on-demand distribution for all types of content, including the entire video game ecosystem, the creative arts, vlogging (IRL), and more. Twitch also runs TwitchCon, an annual convention for celebrating the Twitch community. For more information about Twitch, visit our Press Center, Twitter feed (#Twitch), and Blog.

Samsung released a "Walk Mode" app, and it's terrible