Now that you’ve had a week in the wake of its launch to ruminate on the OnePlus 5, it’s time for us to tell you all the reasons you should think about it. Of course, there’s our review to consider, too, in which the OnePlus 5 even earned our hallowed “Most Wanted” award. But if you’re here for the TL;DR, we’re happy to oblige. 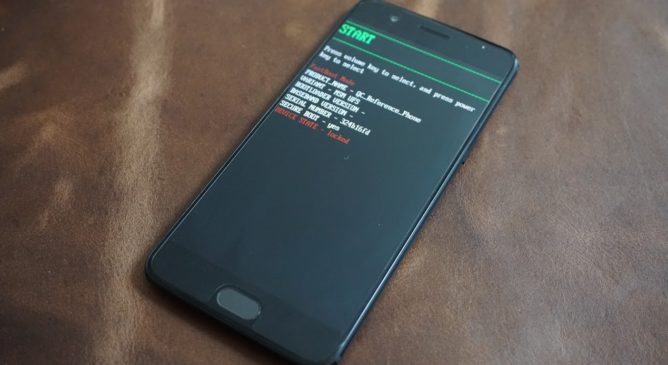 If you are the sort of person that enjoys activities like rooting and ROMing, and the utility gained from them, then the selection of phones that can please you is somewhat limited. Lots of manufacturers like to lock their phones down as tightly as they can, which prevents enthusiasts of that sort from being able to pick up a Galaxy S8 with any expectation of success. And while eventually, most popular devices end up with an exploit, it’s often more trouble than it is worth, and a security issue in itself.

ROMing isn’t just a matter of entertainment, feature-chasing, or a hobby. Often times it’s the only way to keep a device up to date when OEMs abandon it, leaving you with gaping security holes and no expectation for a patch. While OnePlus’ track record on promised updates is questionable, at least with an easily unlocked bootloader, you’ll be able to take matters into your own hands.

OnePlus phones also have fantastic developer support. The ROM selection is incredibly wide, and if you do run into a problem, it’s much more likely you’ll be able to find documentation by someone else with the same issue. With the ease of unlocking, rooting, and ROMing their phones, OnePlus has deftly dressed itself in the Nexus mantle. So if you are big into ROMs, or want to get root-level access on your device, the OnePlus 5 is an excellent choice. 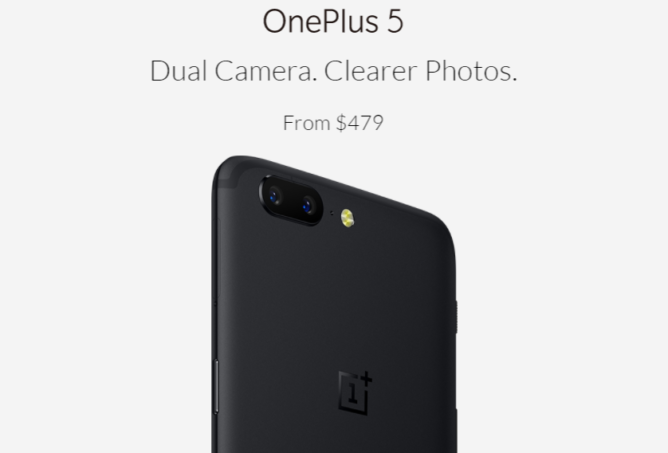 The OnePlus 5 is an exceedingly inexpensive phone, given its specifications. For $479-$539 you get a Snapdragon 835, 6-8GB RAM, 64-128GB UFS 2.1 storage, dual cameras, and a dual-sim globetrotting radio. Some people might prefer a higher resolution display, microSD expandability, or a better camera sensor. And, if that's your preference, you can even have it with a phone like the Galaxy S8. But, you definitely won’t be spending $479 to get it.

It isn't that the OnePlus 5 is the best phone out there, but it's 90% there for 60% of the price, making it a great value. You get most of the same experience, but for much less. Right now the US unlocked Galaxy S8 is $725 at Best Buy. But you can get the same SoC, the same storage space, more RAM, subjectively better software, plus dual-sim support, and better frequency support, and all for almost $250 less. For some people, the extra cash isn’t worth the improved screen and camera. 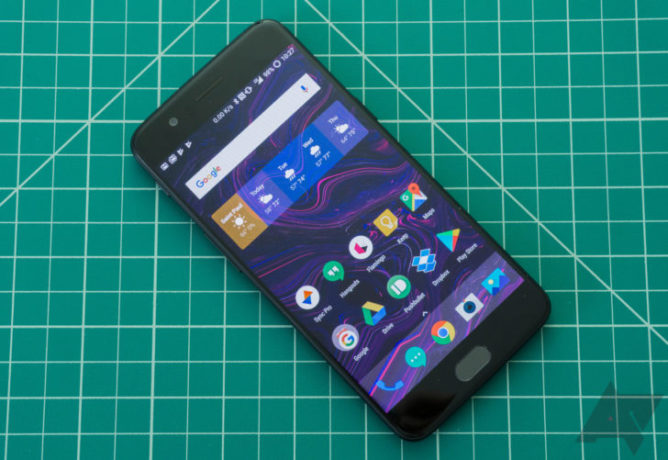 Android modifications can be a polarizing subject. Some users find a lot of value in OEM skins, but the opinion varies. Often times it seems that skins come with a cost of decreased performance. So regardless of how much you might like or dislike how a particular manufacturer has tweaked things, you may find the dropped frames and jank to be too much to bear on a brand new phone. Or you may even just prefer the simplicity of stock Android. But either way, the software on the OnePlus 5 is fantastic.

In an era when OEMs think 7.0 is enough Nougat for you, OnePlus takes that extra step up to deliver 7.1. So you get app shortcuts, gif support in keyboards, Night Light, and all that 7.1 jazz. Oxygen OS might be the brainchild of OnePlus, but when it started the project back in 2015, OnePlus brought on some of the best minds it could, including some developers from AOSPA. While those developers may have left, the quality of software on the OnePlus 5 is still quite good, and security updates for the OP3 have been fairly regular.

OnePlus took what I call the “stock+” approach when designing its Oxygen OS 4.5 ROM. Nothing has been changed or removed, but there are a bunch of new features on top of what you already expect, and those you can mostly ignore, if you choose to. So if you are coming from a Pixel or Nexus device, there won’t be any learning curve. There are just a few more options on top, like basic theming and gestures. The stock launcher is even decent if you don’t immediately replace it. 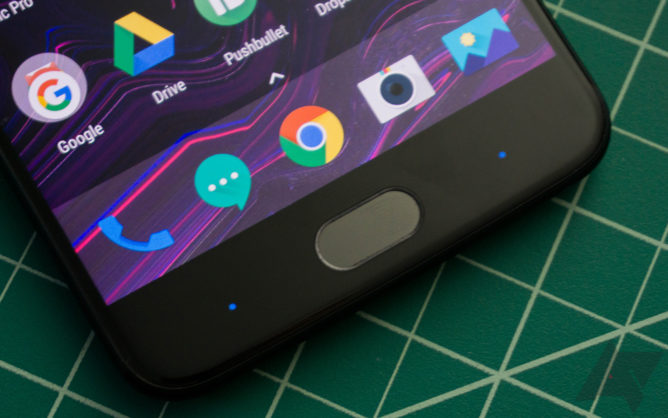 This isn’t the sort of thing everyone makes a big deal over, but nothing is more annoying than having to tap more than once for your fingerprint sensor to get a reading. Especially if you have callused hands that might interfere with a good imprint. But, try as I might, I can’t get the OnePlus 5 to fail me. It is incredibly accurate.

In addition, there is less than a second between me tapping my finger on the sensor, and arriving at my home screen. So not only is it quite accurate with poor quality input, but it’s also one of the fastest I’ve used. I’m not sure if the sensor is the same part that was in the OnePlus 3, which I was also a fan of, but it’s exceedingly quick.

Some people like their sensors on the front, others prefer them on the back. Myself, I like the multipurpose home-button use that OnePlus has assigned it, but you might not feel the same. It may make no difference how fast the sensor is if you don’t like where it is. But, if you can learn to like it, this fingerprint sensor is one of the fastest and most accurate that we’ve used. 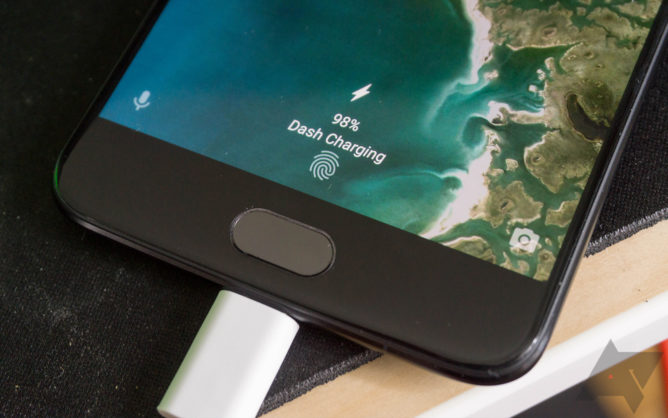 The Snapdragon 835 in the OnePlus 5 isn’t just one of the fastest processors around, it’s also much more power efficient than the last generation. The Snapdragon 820 may have fixed the mess that the 808 and 810 brought to the flagship space, but the 835 is an even bigger improvement. Qualcomm even showed a full watt of savings (20%) in some workloads vs the 820. So you won’t just have one of the snappiest phones on the block, you’ll be able to last a good long while between charges, too.

In more anecdotal tests, we found battery life to be quite good. In our review, we saw up to 20 hours of use, with 6 of screen-on time. And that’s with heavy use. If you perform lighter workloads and don’t use your phone as much, you might be able to stretch things out to a day and a half. And even if your battery does run out, with OnePlus’ Dash Charging you’ll be ready for another day in just a few minutes. Or, as OnePlus likes to say “A day’s power in half an hour,” which I have found holds true.

The phone has so much going for it that it can be tough to just pick out five things worth saying, but we felt the five features above were the most noteworthy. There are a few features left on the OnePlus 5 worth an honorable mention, though.

The camera in the OnePlus 5 is a bit divisive. But it’s one of the few good Android phones with any optical zoom. The electronic stabilization also works pretty well, and the camera is fast to focus. The choice between capacitive and software keys is also nice to have. Most of us prefer one over the other, and the way OnePlus has things set up means that each type of user can be happy without being bothered by a busy bezel. The display on the phone may be the same model as what was in the OnePlus 3, but the OnePlus 5 has brought some new color configuration options to the table. In sRGB mode, the screen remains well calibrated. And, of course, there’s the X16 modem, which has 4x4 MIMO and 256 QAM for crazy-fast LTE speeds.

Honestly, we could go on. The OnePlus 5 is a great phone. It’s hard to pick out just a few features to talk about. But, I’m confident this list can help you to make a decision.

Oxenfree is an awesome point-and-click game set in the 80's, and now it's on Android

Duo is now asking to integrate with your phone's call history, but it might not be working yet