It's been some time since Qualcomm issued the 400-series Snapdragon chip a generational update, but it looks like we're finally getting one today. The new Snapdragon 450 sees Qualcomm's mid-range smartphone platform move to a 14nm process, a change that should bring very significant efficiency gains, as current 400-series chips are on a 28nm process.

Like the outgoing Snapdragon 435, the current most-powerful 400-series chipset, the 450 still utilizes Cortex A53 cores, but on a smaller 14nm process. Qualcomm is also very substantially raising their max clock speed, up to 1.8GHz on the 450 versus a max of 1.4GHz on the 435. A new Hexagon 546 DSP will be up to five times as efficient as the DSP in previous 400-series chips, presumably a result of some higher-end parts from the 600 and 800 series trickling down into Qualcomm's portfolio. 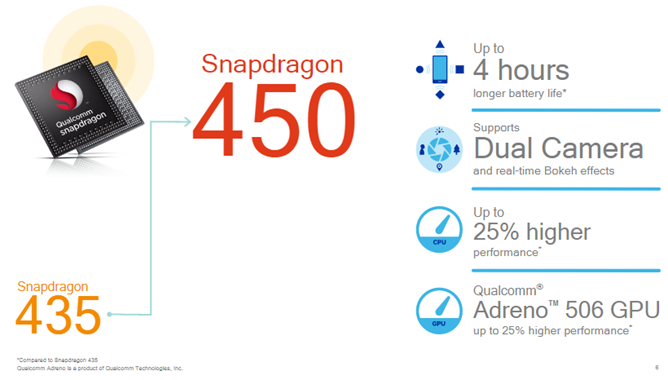 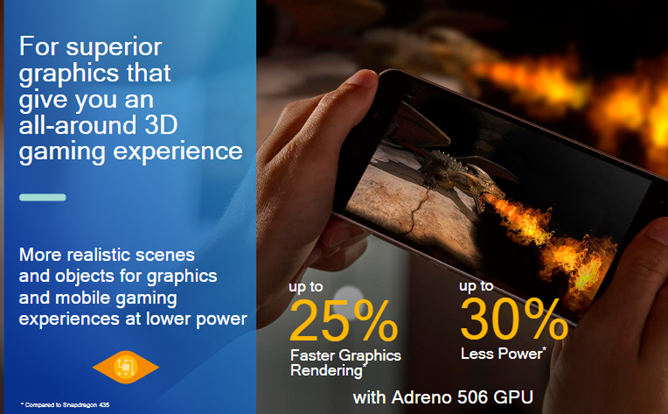 There's a revised Adreno 506 GPU that adds support for things like Vulkan and DirectX 12 - this GPU is actually pulled from the Snapdragon 625, another case of trickle-down - that has twice the number of processing clusters and is built on the 14nm process (the 505 was 28nm, of course), resulting in very significant performance and efficiency gains.

You can read more about the Snapdragon 450 in the press release below, but suffice it to say, this is probably the most significant revision to the platform since the 400-series moved from the old A7 and Krait cores to the current A53 design. Shifting to a smaller process and updating some of the core components should make for a serious experience upgrade even over the Snapdragon 435 - though that upgrade will entail a slight wait. Qualcomm says the first devices with the new Snapdragon 450 won't begin shipping until Q4 of this year, so you won't see them showing up until October at the very earliest. Still, good news for the budget segment.