Today Chromium Evangelist François Beaufort revealed a new feature in the current Canary channel for ChromeOS. Chromebook users everywhere can now look forward to being able to set the activity their device performs when the lid is closed. In the current Dev, Beta, and Stable channels, the behavior can't be changed, and when the lid is shut the device goes to sleep, but users that migrate to the Canary channel (or who are fine waiting) will be able to set their Chromebook to stay awake.

This seems to be one of those incredibly polarizing features that you either desperately need or don't care about. In our own discussion of this news at AP, we ran the gauntlet from total indifference to incredible enthusiasm. Depending on your personal workflow you might be excited, too. 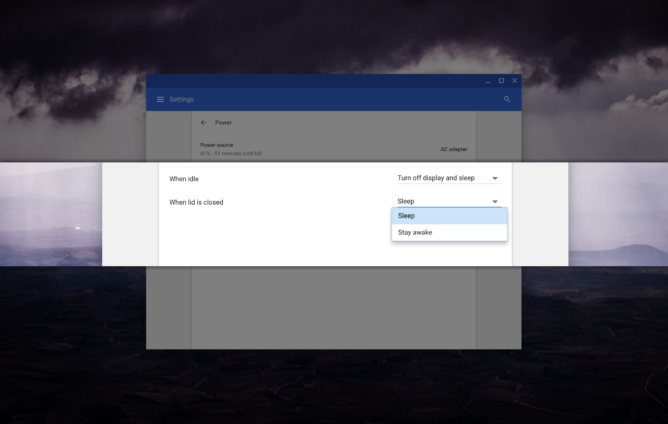 From the screenshot on the Google+ post, we can see that the change is quite simple. The option will be in the snazzy new settings menu introduced in Chrome 59, in Settings -> Power -> When lid is closed. This setting will have two options for configuring behavior, to either sleep when the lid is closed, or stay awake.

Since the feature is still in Canary, it's possible that it might be changed or cut before it hits the Stable channel. Release cycles for Chrome aren't always entirely dependable, but we almost always see a release every six weeks. So, features that are added to Canary now should make it into the next Dev channel builds some time next month, Beta channel six weeks later, and Stable six weeks after that.

That isn't to say that the changes couldn't be pulled in early, but October would be the latest I would expect to see this feature hit Stable, barring any significant impediments. So whether your basic workflow absolutely requires the ability to keep the device awake when the lid is shut, or if you can only think of a few cases where it might come in handy to change the default behavior, either way, the option will be coming soon.

T-Mobile's LTE-U network is rolling out in select cities

Google Home v1.24 prepares to give Google Home users an option to automatically cast to ...