With OnePlus' launch event scheduled for tomorrow, the internet today is a sieve before the unrestrained torrent of leaks. So here are some of the highlights we've seen today. We'll be keeping this updated with anything we see that's of interest. Unless, of course, it's so interesting that it warrants its own post. 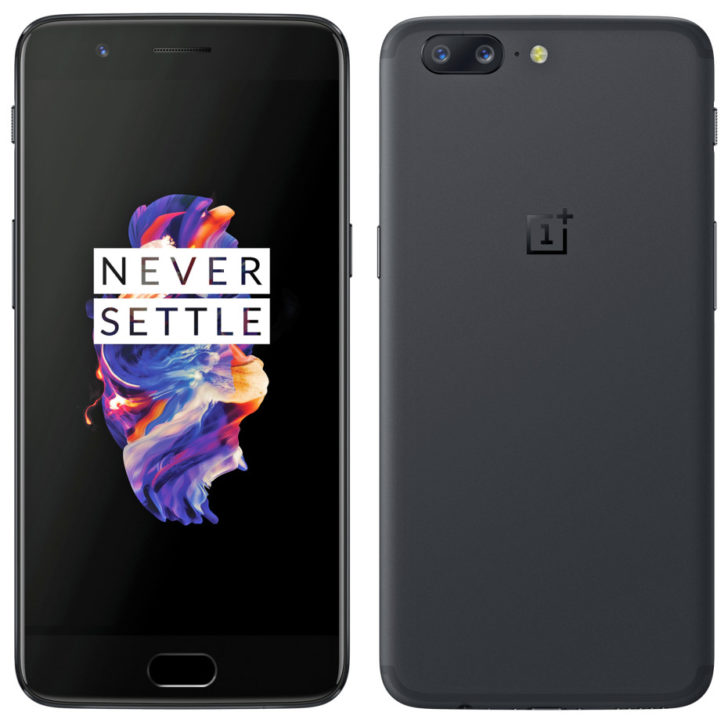 Evan Blass posted this leak over at VentureBeat, and it's the best full-frontal shot of the OnePlus 5 we've seen yet. The resemblance to Apple's phones is even more striking from this angle. It might just be me, but the camera does seem a bit different than it did on some other images which leaked earlier. The change in angle may be responsible for that, though. The size of the power button also looks like may have changed since last year.

There's also a leaked unboxing of the new phone. Over at the Chinese site MyDrivers, someone dumped a whole set of images showing off the box, phone, and a case, presumably the "ebony" one, if the OnePlus 3 cases are anything to go by. The packaging doesn't look to have changed much since the OnePlus 3/T, we've got the same colors, style, and overall shape. Instead of having the name of the phone, it looks like there is is a new tagline on the side of the box, "Dual Camera. Clearer Photos." That seems to reiterate The Verge's article today, in which the site claims that the camera was a big focus for OnePlus. Other included bits like the plastic tray the phone rests on look pretty similar to last year. 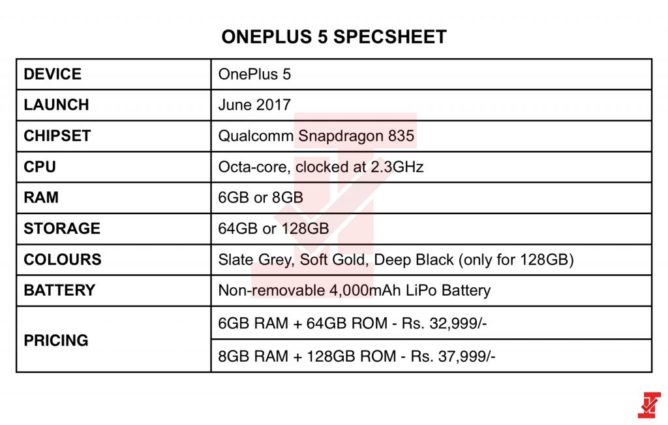 TrueTech claims that it got ahold of the specifications for the OnePlus 5. The site reports that the phone will include a 4,000mAh battery and that there will be two variants. One model with 6GB RAM and 64GB storage, and another with 8GB RAM and 128GB storage. TrueTech also claims there will be three color options, Slate Grey, Soft Gold, and Deep Black. The latter is alleged to be exclusively available with the 128GB version.

@OnePlusReport Here I have the exclusive photo of OnePlus 5 with cases ! Pls share pic.twitter.com/02MDiBVOKd

Harsh Pittroda over on Twitter made a post earlier today showing off four different cases for the OnePlus 5. They all look pretty snazzy. We can't be sure which is which, since names and materials may have changed since the last generation. It looks like, from left to right, we have a rosewood case, "Karbon" case, ebony case, and a sandstone case. There's no sign of the bamboo, though, which is my personal favorite. I hope that it hasn't been dropped from the lineup, but it's possible that one may not have been ready in time, or they may have not included it in his package.

We already noted this in our post on The Verge's exclusive, but the site also leaked a new feature from OnePlus' upcoming phone. The story claims that the OnePlus 5 will have a new feature called "Reading Mode" which "makes the display mimic the look of a Kindle e-reader." I'm not so sure what that might entail, but as a fan of reading modes in most applications, I can't wait to check it out.

That's all we have for now, but we'll be sure to keep this list updated with more leaks as we see them. So if you're enthusiastic about OnePlus' next phone, you might want to check back in later to see if we've added anything new.

Sony Xperia XZ Premium launches today in the US for $799.99

Sony's Xperia Touch interactive projector is now available in Europe for the princely sum of ...