The personal assistant arms race is heating up, as the latest update for Microsoft's Cortana can now easily replace the Google Assistant. If you'd like, the next time you long-press home to pull up your personal assistant, you can find the familiar oscillating purple and white dot staring back at you. The new feature comes via the latest 2.8 update to the Cortana app on Google Play. If you'd like to check out how it works, we gave it a try.

As you can see, once things are set up it entirely replaces the long-press home shortcut with a Cortana overlay reminiscent of the Google Assistant. Through it, you get the same features that you would from Cortana in-app. All of the same actions can carry over to your PC, so you get one assistant cross-platform. Missed calls on your phone result in notifications on your desktop or laptop and reminders created on your PC can be triggered on your mobile device.

It's the same Cortana, but now it can feel like a built-in system on your Android phone. Setting this up is surprisingly easy, as the app will walk you through the process. On the first launch, after logging in, the app asks if you'd like to set up some basic features like lock screen support. Once you are logged in, the option to set Cortana as the default assistant appears as an item in your feed. If you select the item, it takes you to the "Assist & voice input" section of settings where you can change the "Assist app" from Google to Cortana.

Once that's set, the assistance shortcut (which is usually a long-press on the home button) will trigger Cortana. Unfortunately, changing the default app doesn't let you launch Cortana by voice, and I wasn't able to get it to work in landscape mode in any app. Instead, triggering Cortana just rotates the device to portrait, which seems like a pretty significant omission. Granted, Google Assistant does the same. 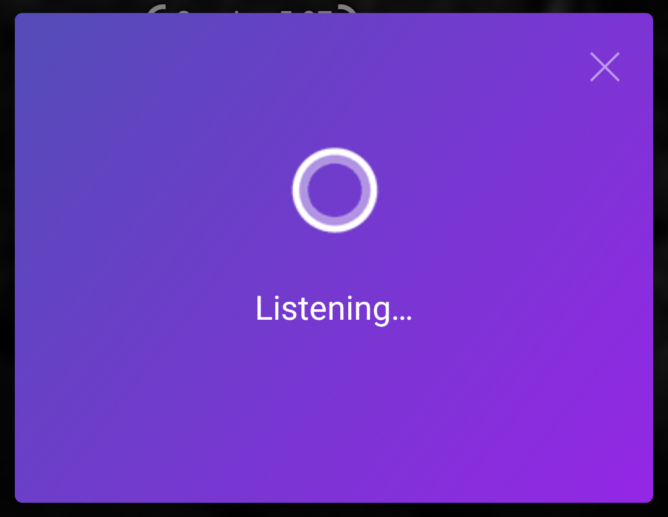 Historically, there have been other workarounds to set Cortana as your default assistant. After all, Android handles most application launches via implicit intents, so all Microsoft needed to do was include the intent filter for that component in the app. But this is the first time that Cortana has explicitly advertised the feature, and now instead of just having a long-press launch the app, you get the improved experience of a Google-Assistant-like overlay, which makes it a pretty great drop-in replacement.

It's up to you if you consider Cortana to be a more useful option. But, just having the ability to change the assistant you use is a good feature. More choice is always a benefit to consumers, and now those that wish can switch over to Cortana with a much improved, better-integrated experience, all without having to give up all the other great features of Android.

The full changelog for version 2.8 of Cortana is below.

What’s new in Cortana 2.8.0:
· Now you can set Cortana as your default assistant on Android!
· Improved calendar consistency across PC and phone
· Improved app performance
Thanks for using Cortana!

Whether you had Cortana set up via intents before and you'd like to see how Microsoft has tweaked things, or you're giving it a try for the first time, you can check out the latest update over at Google Play or APK Mirror.