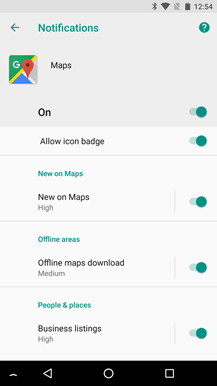 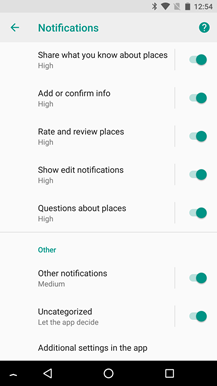 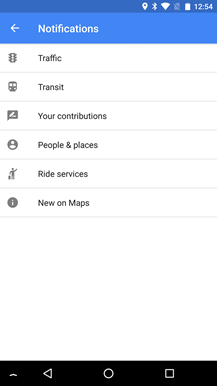 Apps with notification channels are popping up left and right, and after the teardown of Maps v9.54 included a header title for "other" notifications, it was a pretty obvious they would be turning up here too. If you're running Android O, you can head over the notification settings and look through each channel to customize its importance, sounds, vibrations, and whatever else suits it.

At this time, I count 28 channels, one for each of the notification types listed in the app, plus a couple of general channels. There is also a link at the bottom that opens directly into the settings screen inside of Maps. Unlike the Android Messages app, the old screen for notification settings is still there, but those are a bit redundant on Android O.

Ever since the (re-) launch of offline navigation in Google Maps, there have been a few specific features users have been begging for. From what we've seen, the most-requested features always have to do with changing the shape of the downloaded maps. We're probably not going to see fully customizable shapes for our offline maps quite yet, but we might be getting the option to download maps in the shape of different countries.

The clue for this one is more about the names of the new strings than the text they represent – two of them have "country" in the name. It actually looks like two of the lines are going to be options to either select a custom map or pick a country to download. If you pick a country, the title will read "All of Italy," or something to that effect.

While I'm trying to keep optimism measured, it's hard not to look closely at the line that says "select a region" instead of the more technically accurate option to select a country. The reason this interests me, as a citizen of the United States, is that I can't fit a whole map of this country on my phone. I wouldn't want to even if it was possible. However, I might consider downloading an individual state. I'm cautiously hopeful that the Maps team has this in mind and the name of the string is left over from early development.

Based on the comments from numerous articles in the past, I can only imagine this will make a lot of people pretty happy, especially as we enter the travel season.