Eero was among the first companies to usher in a new wave of mesh WiFi systems. The startup's goal was clear: Introduce easy to set up and incredibly powerful WiFi across homes that suffer from poor signal. The three-pack of attractive white routers wasn't cheap but performed commendably, and the companion Android app also won many plaudits. After numerous OTA updates improving the service, as well as the release of performance doubling TrueMesh software, Eero is now refreshing its hardware offering with not one but two new devices.

The first is, unsurprisingly, an update to the standard Eero router. It may look identical to its predecessor, but it's inside that counts, and Eero is promising that it's twice as powerful while maintaining the same form factor. That's important, as one of the key selling points for Eero is that the box smaller than its competitors without sacrificing power. It's apparently the only WiFi access point of its size to offer Tri-band WiFi, allowing it to handle the needs of multiple users around the home with ease. The 2nd generation Eero router, which also gets a speed and range increase, can easily be added to existing Eero systems. 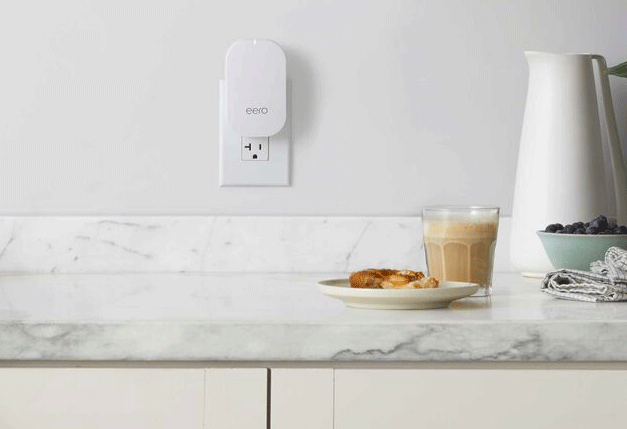 Not content with simply updating its primary product, the company also unveiled the new miniature Eero Beacon. It's a fully fledged access point that plugs straight into a power outlet. Even though it's half the size, it still boasts 30% better performance than the original Eero router, which is pretty impressive. It's designed to reduce clutter in areas without space for a full-sized router, like in the hallway or on a kitchen worktop. Beacon only has two bands and doesn't have an ethernet port, so you'll need a regular Eero router to connect it to. It also has a nightlight with an ambient light sensor, controllable from within the app.

For those wanting to use Eero for smart home functions, both new devices come equipped with a Thread radio, the first WiFi system to do so. This effectively future-proofs the system to work with the latest smart home gadgets, as the new low-power wireless protocol is expected to lead the way in this field.

You'll be able to buy single units of the Eero router ($199) and Beacon ($149) to add to existing systems, or different packages ranging from $299 to $499. The most expensive of those is the same as the original price for a 3-pack of routers but with double the power. Even the cheapest, including one router and one Beacon, is still more powerful than the original, indicating a significantly better value proposition compared with the first generation. The new products will be available from eero.com, Amazon, Best Buy, Target, Walmart, and others.

Aside from the new hardware, the announcement included a new security service, Eero Plus. The seamless utility will check suspicious websites before allowing you to connect without you even noticing, and also offers expanded parental controls and VIP support. There are no details on pricing yet, but the subscription service will be available in the coming weeks through the updated Android app, which now has a new look and easier setup process. The app already has an impressive 4.6 rating on the Play Store, so it will be interesting to see what users think of the makeover.